Since November 2016, election after election has made clear that Democratic voters will crawl over broken glass to get to the polls to defeat Trump and #Cult45-enabling Republicans. Massive turnout in Virginia’s (and many other states’) Super Tuesday primary is the latest tangible sign of that.

One of the reasons for this is that Donald Trump is the epitome, a real-life version of the stereotype of the rather lunatic, self-centered, loud, and arrogantly ignorant Cranky Uncle to be put in a corner by himself at family events in hopes that his rantings and rudeness don’t blow the event.

George Mason University’s Center for Climate Communication research Assistant Professor John Cook has just published a book that should be useful in putting that Cranky Uncle into the corner — at least when it comes to the issue of climate science denialism (which is one of the (perhaps too numerous to mention) spaces of Trump’s worst Cranky Uncle ravings).

Now, for some quick background …

When it comes to climate and GMU, many are well aware of the Koch Brothers uber-funding of George Mason and the fostering of climate-science denialism and confusion within portions of the University. A tip of the hat to UnKoch / Transparent GMU for their efforts to expose and fight this.  At the same time that there is part of GMU that is a center for climate confusion fostering, the GMU Center for Climate Communication is a font of wisdom about key climate communication challenges and has done truly stellar work in some domains to foster improvements in how climate issues are communicated to the broad public. For example, this group has been central to and had some real success in a decade-long effort to engage and educate TV meteorologists about climate.

Cook is an Australian academic brought to GMU a few years ago. Perhaps without realizing it, you know of his work. He did (okay, was a key player in) the analytical work to show that at least (and, more recent work shows more than) 97% of the relevant world’s scientists agree with the consensus that (a) climate change is happening and (b) human actions are the primary cause of the global warming.

Less visible to most, Cook also is a key player in the website Skeptical Science, which seeks to identify, dissect, and provide the actual science to refute climate science denialism talking points. (For some of us, that work has provided a “Science Denialism by the Numbers” shorthand for summarizing inane comments from scientific luminaries like Cranky Uncle Donald.)  John is also the author of the Debunking Handbook. While focused on climate science issues, this short and thoughtful piece is extremely useful for dealing with ‘myth’ and falsehood busting. (I highly recommend it.) Unknowingly to me, until recently, Cook is also a cartoonis 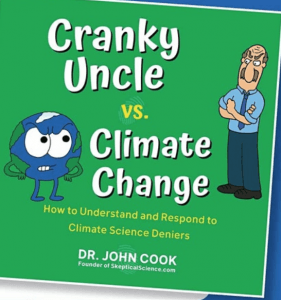 t. He has now combined his specialization in tackling climate science denialism with that skill set.

With  “Cranky Uncle vs Climate Change”, Cook has provided an extremely digestible illustrated guide to the climate science denier tactics and arguments, how one can think about them, and how to engage with (or against) them.  (Or, well, how to engage them to influence and educate onlookers because that Cranky Uncle is unlikely to be convinced they are wrong and best kept in the corner.)

This book gives us the whole ball of wax that is the science of climate science denial in a very funny, really well produced, and compelling wrapping. It will amuse you, and it will advise you. Your cranky uncle is done for.

If you’re intrigued, this is a last minute heads-up that you have a chance to hear from the author directly about how to deal with your/our Cranky Uncles.  This evening, 7-8:30 pm, at GMU’s Arlington campus (Room 134, Van Metre Hall 3351 Fairfax Drive), there is a book release event. If interested, sign up here: Cranky Uncle vs Climate Change.

UPDATE: Cook’s talk and the following question and answer session provided some richness as to how John became a foremost expert about dealing with (climate science) denial, the purpose and potential impact of the book, and the forthcoming Cranky Uncle ap. 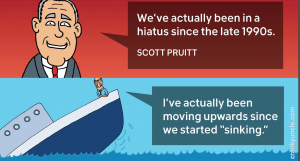 Virginia’s Gubernatorial Election is Being Fought on the Climate Battleground, and Fossil-Fuel-Funded, Science-Denying Glenn Youngkin Is Definitely Not the Way to Go