What on earth is going on here? Did somebody kidnap far-right, extremist wackadoodle Virginia State Sen. Amanda Chase (R-SD11), who just the other day was indulging in conspiracy theories about Coronavirus suppoedly being a “bio weapon,” but is now – suddenly – urging her “base” to take it seriously? That’s right: Sen. Chase is now saying “I implore and encourage you to take this COVID-19 seriously,” to “practice social distancing” or “it’s going to get worse over the next 2 weeks.” All of which would be totally normal, unastonishing advice from just about anyone other than crazies like Chase. Even more amazingly, Chase calls out her own core supporters, actually admitting that “it’s my base of support that isn’t taking this seriously.” What on earth is the world coming to? First Coronavirus, now…this? It’s hard to decide which is more astonishing, LOL. Of course, Chase’s base isn’t necessarily going to appreciate her calling them out…see below for some fun 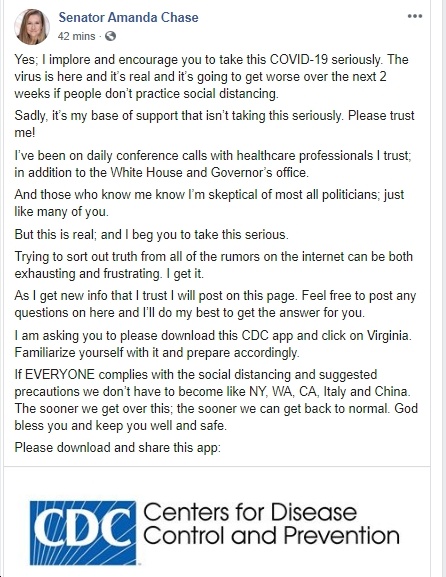 A bunch of Chase’s base clearly isn’t going to like this does of reality from their leader. For instance, this “Top Fan” says that until we have “real mortality and morbidity rates, everything else is just propaganda…beyond ludicrous.” Note that this comment has been “liked” and “loved” 14 times…’nuff said.

As one reality-based commenter notes, it shouldn’t be surprising that it’s Chase’s “base that isn’t taking this seriously,” given the fact that Chase has spent “your year promoting conspiracy theories and inflaming anti-government hostility.” Now, Chase is finding it “hard to get that toothpaste back in the tube.” Shocker.

Meanwhile, despite her sudden flash of reality-based thinking, Chase is still wrong…in fact, we need to do both – educate AND mandate.

We’ll keep an eye on this to see what the next twist/turn might be in Chase’s – and her “base”‘s – ongoing struggle with wrapping their brains around the Coronavirus (or as Trump incorrectly calls it, in his typical racist/xenophobic style, the “China Virus”).

Friday Night Update from the ER in Arlington, VA: “COVID numbers continue to move in the right direction.”