I don’t know about you, but I’m starting to get real antsy about November. With every leadership failure from Washington, every divisive and demented press conference or Tweet, I’m more acutely aware how critical this election is, how urgently we need someone who will listen to scientists and experts, who can work with other world leaders and state leaders, and who will rebuild a functioning government. This feels like a life-or-death election for our democracy.

Joe Biden is now the presumptive nominee, but his campaign can’t really kick into gear until after the convention in August. And this will be a strange campaign where we may not be able to knock doors and hold big rallies and events. So it will be more important than ever to be creative in our campaigning, to maximize social media and digital outlets, and to be as loud as we can and to generate enthusiasm and hype every way we know how. It’s my personal belief that there aren’t really undecided voters this year—it all comes down to people voting like their lives depend on it.
Here are a handful of ways you can already help, right now.

We need all hands on deck. No one can sit this one out. We will have the chance to rebuild our economy when the pandemic is over, we cannot afford that rebuilding to be done by the incumbent. We cannot afford four more years. Our democracy will not survive. Don’t let yourself wake up on another Wednesday in early November, broken-hearted and guilty for not doing everything you could. 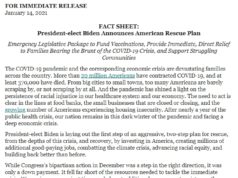 Video: Rep. Abigail Spanberger (D-VA07) – Leaders Must Not Let Lies Go Unchallenged or They Will “Fester and Foster These Conspiracy Theories That There...