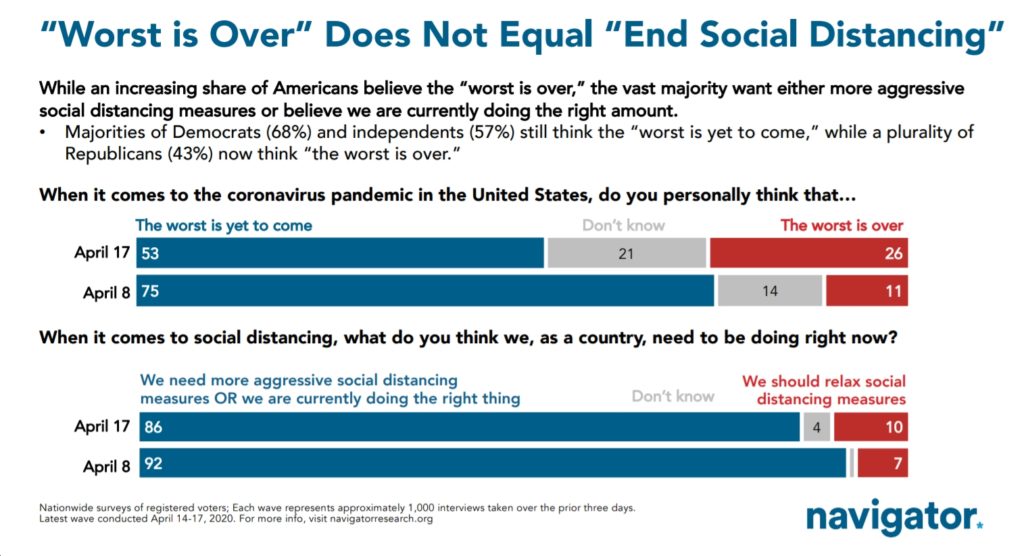 In the past week, we have seen protests across the country, that are being pushed by far-right groups, to open the government. Given these protests, as well as President Trump’s sympathetic comments, there is no better time than now to have hard data showing how Americans really feel about the state of affairs in our country in regards to the novel coronavirus. For instance: in comparison to Kennedy’s assasination, Pearl Harbor and the 9/11 attacks, polls show that 38 percent of Americans believe the Covid-19 pandemic to be more significant than those events.

Currently, the United States has the highest number of confirmed cases of Covid-19 in the world, recently surpassing 700,000. But small factions of people across the country are ignoring these numbers to try and force their leaders’ hands in easing social distancing restrictions, even as scientific experts and President Trump’s own administration says that the measures are working. Dr. Birx, the White House task force coordinator, also made it clear – again, in agreement with the science – that Americans will have to recommit to social distancing to keep up the positive momentum.

For instance, thousands of protesters – some of whom were members of right-wing militias – showed up recently in Michigan, chanting “lock her up” in reference to the state’s governor, Gretchen Whitmer. President Trump followed suit not long thereafter, tweeting “Liberate Michigan” (and other states, including Virginia).

But as the protests continue to pop up across the country, including here in Virginia – where a few dozen protesters marched at the Capitol building in Richmond last week – the numbers show that the majority of the country does not support their cause.

In a recent poll from NBC News and Wall Street Journal, 58 percent of respondents said they worry that social distancing limitations will be lifted too soon, while only 32 percent of people said they worry that the restrictions will not be lifted soon enough. This comes as Trump recently stated that he is trying to reopen some areas soon (“We’ll be opening some states much sooner than others”).

While Trump tries to lay the blame for the COVID-19 pandemic on the states and their governors for not being prepared, 66 percent of respondents trust their state’s governor, while only 44 percent of registered voters approve of President Trump’s handling of the coronavirus situation – with 52 percent disapproving.

Some political analysts believe that these rallies happening across the country are part of a strategy to help the president and the public’s opinion of him. Of course, Trump wants to take credit for any good news, while also wanting to make sure that governors receive the blame for any bad news, such as the downturn in the economy. Then, if the economy opens back up and turns around in time for the election, Trump hopes to take the credit, pointing to the fact that he pushed for the swift reopening. However, if the number of deaths continues to rise, Trump has indicated he plans to blame governors, like dropping one-liners during his press conferences, such as saying that the governors will reopen when it is “safe.”

But when will the country feel safe?

Over 70 percent of people polled last week were worried that someone in their immediate family would catch coronavirus.

“I think one would have to be clueless not to be scared right now,” says Eric Toner, a senior scientist at the Johns Hopkins Center for Health Security. “The current coronavirus pandemic is worse than many that we have anticipated in the past … this is going to end up being a truly historically bad event.”

Meanwhile, the economy, which Trump has argued is the biggest accomplishment of his presidency, is quickly deteriorating during the pandemic. While the economic downturn due to the pandemic likely would have occurred no matter who was president, Trump and his campaign were relying heavily on the strong economy to help voters overlook his other failings as president. In March, nearly 50 percent of respondents viewed the economy as good or excellent. By mid-April however, only 23 percent of registered voters shared that same optimistic view of the economy.

In regards to trusting organizations and leaders to guide the country through the pandemic, 69 percent of respondents said they trust the Center for Disease control, while 60 percent said they trust Dr. Anthony Fauci. Only 36 percent of people said they trust President Trump to provide proper guidance on surviving this pandemic.

It’s important to remind everyone that Trump and his surrogates repeatedly tried to downplay the coronavirus as it terrorized Asia and Europe in January and February.  Even though they dismissed the potential risks for the United States at the time, the U.S. government received intel and briefings in the early weeks of 2020 about the high likelihood of a potential pandemic in the coming months. After the Washington Post reported on this early intel, a White House spokesperson pushed back on claims that Trump ignored the potential pandemic warnings leaving the country unprepared.

“President Trump has taken historic, aggressive measures to protect the health, wealth and safety of the American people — and did so, while the media and Democrats chose to only focus on the stupid politics of a sham illegitimate impeachment,” Hogan Gidley said in a statement. “It’s more than disgusting, despicable and disgraceful for cowardly unnamed sources to attempt to rewrite history — it’s a clear threat to this great country.”

Unfortunately for the White House, the latest polling finds that Trump’s approval ratings have slipped signficantly since March, with only 34 percent of registered voters satisfied with the number of tests available to determine how much the virus has spread.

Of course, for many years, activism and protests have played important roles in both Democratic and Republican strategies in order to gain political power and shape public opinion. In this pandemic, while a glimmer of bipartisanship was present at the beginning, we are starting to see signs of negative polarization as we approach this fall’s elections. Republicans will likely continue to push for a more rapid lifting of COVID-19 restrictions in order to “save the economy,” while Democrats strongly support social distancing measures in order to both save lives *and* save the economy.

The next few weeks and months will be key in stopping the virus. November still seems like a lifetime away when we are stuck at home each and every day. With information and trends changing by the hour, it is nearly impossible to know what will happen just days into the future. The only fact we can be confident in is that the decisions our political leaders make these next few months will make up a major part of the conversation when their names are on the ballots this November.