See below for video and photos of today’s anti-“lockdown” protest – by about “a dozen or so” protesters (“more journalists & police than protesters”), according to Virginia Public Media reporter Roberto Roldan (see his tweets, below) at the Virginia State Capitol in Richmond. Also note, according to WRIC, “A release from ReOpen Virginia said the group had expected ‘thousands of concerned citizens’ to attend the peaceful protest calling for restrictions to be lifted by the end of April.”  So, clearly, they fell quite a bit short of “thousands.”

According to NBC12, “At 11:30 a.m., protesters led by ReOpen Virginia, End The Lockdown VA and Virginians Against Excessive Quarantine [came] together [at the Virginia Capitol] against the restrictions continuing beyond May 1.” From what I can tell, ReOpen Virginia has 18,656 members on its Facebook group, which says it is “upset with the governor’s overreach in enacting Virginia Executive Orders #53 and #55.” Virginians Against Excessive Quarantine appears to have 94 members. It says it’s comprised of “Virginians who desire to maintain their liberty!”; who “love our country and support our government and will only support legal and ethical action”; and who “support the movement of other states who also seek to push back against excessive quarantine!”

In sum, this protest didn’t amount to much, but clearly there’s some sentiment out there pushing to open things up sooner, rather than later. How much sentiment? Hard to say, exactly, but this morning’s Navigator Research polling has 51% who agree that “[w]e are currently doing the right thing when it comes to social distancing”; 35% who believe “[w]e need more aggressive social distancing measures, further limiting people’s movement” (that’s 86% if you combine the two); and just 10% who believe “[w]e should relax social distancing measures, letting people move around more freely.”

Also worth noting from that poll: 55% worry that “[s]ocial distancing will end too soon and prolong the pandemic, endangering the economy and putting American lives at risk,” twice as many as the 27% who are more concerned that “[s]ocial distancing will go on too long and cause unnecessary damage to the economy and Americans’ livelihoods.” Finally, when you break this down by party, only 3% of Democrats think it’s time to relax social distancing measures, compared to 17% of Republicans – higher, but still a very low percentage. So clearly, the folks on Capitol Square in Richmond a little while ago are not in the majority, but in fact in a pretty small minority. 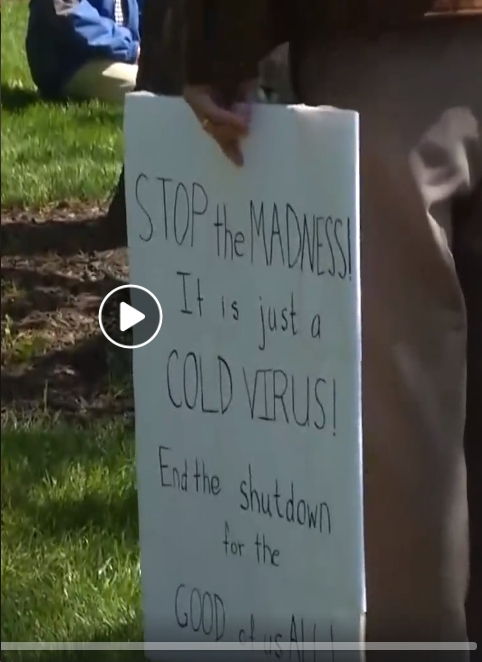 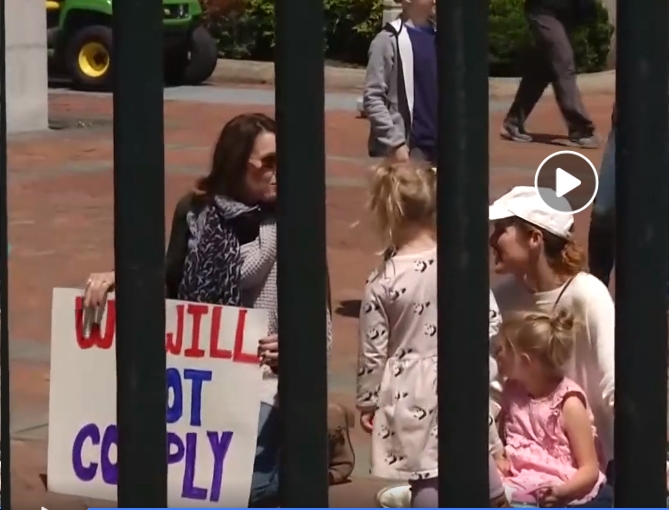 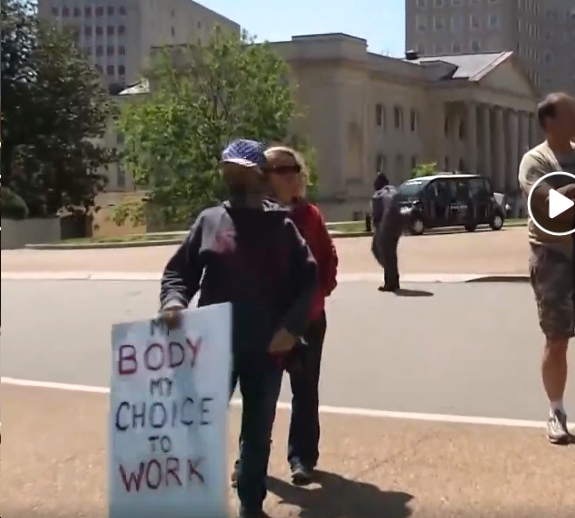 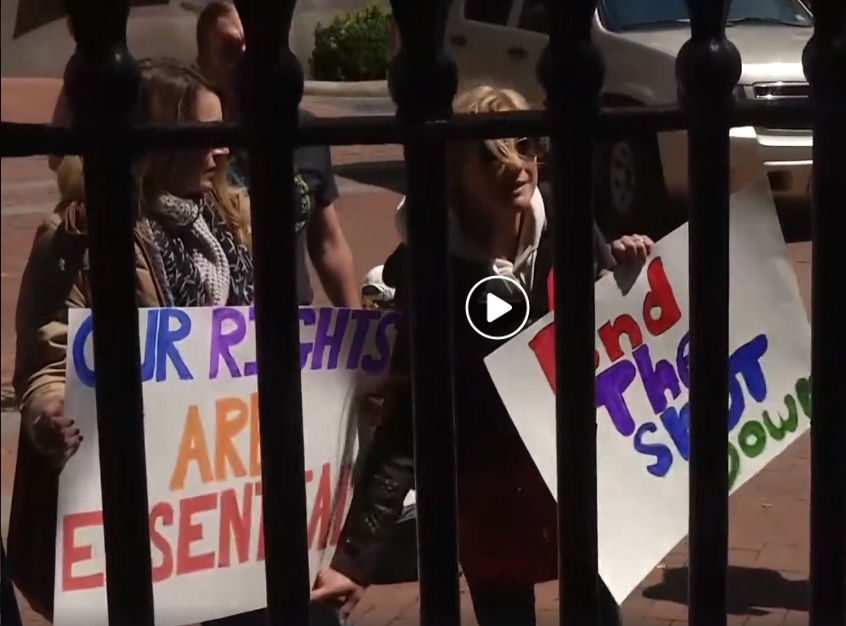 Police now starting to go around the crowd and telling people to spread out. Said they are going to issue three warnings and then start issuing summonses. pic.twitter.com/rENI2K8BgB

Capitol Police officers are asking protesters to spread out as some others call for people to disobey or point out the press isn’t social distancing. @myVPM pic.twitter.com/WJeSJQdMRn

Among those not able to get in is the founder of the Facebook group who organized today’s event. She’s outside the fence with a dozen or so others. pic.twitter.com/FlQORhmtXN 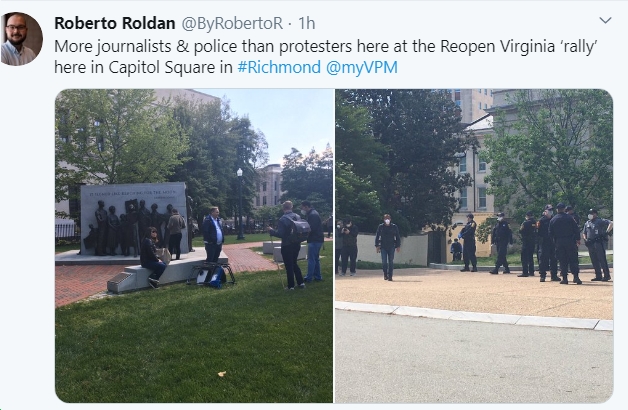 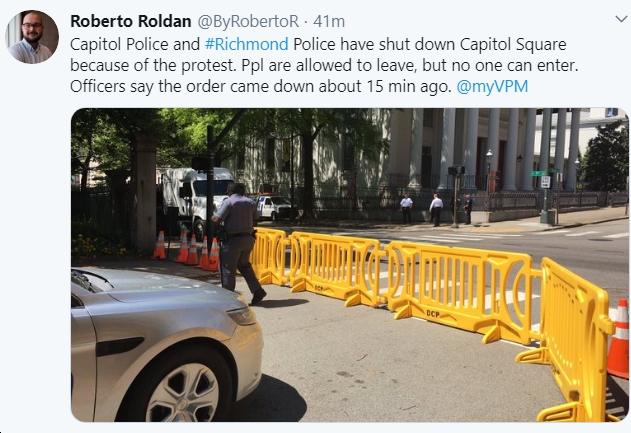 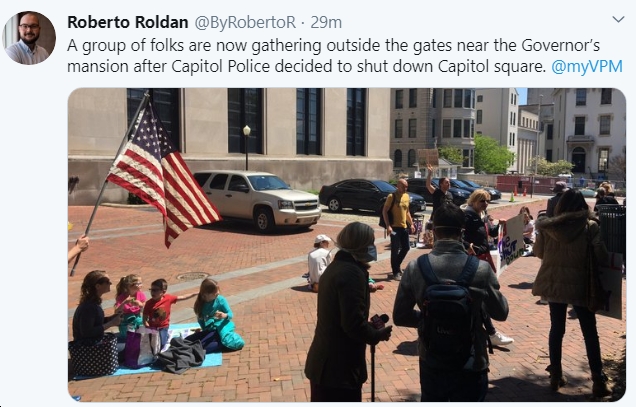