This morning, former CNU Professor, Niskanen Center Senior Fellow and elections analyst/modeler Rachel Bitecofer is out with her forecasts for this November’s elections – “Negative Partisanship and the 2020 Congressional Elections” – and it’s well worth a read. See below for a few general, and Virginia-related, takeaways (bolding added by me for emphasis), as well as predictions for the U.S. Senate race in Virginia (“Safe D” for Mark Warner); and key, competitive U.S. House races in Virginia (“Safe D” for Rep. Jennifer Wexton in VA-10, “Likely D” for Rep. Abigail Spanberger in VA-07, “Lean D” for Rep. Elaine Luria in VA-02 and “Likely R” for Rep. Denver Riggleman in VA-05). Overall, Bitecofer expects Democrats not just to hold the U.S. House, but to add to their majority. As for the Senate, Bitecofer writes, “Democrats are in superior positions in three of the four swing races they need to win a 50-vote majority and have five prospects from which to glean their fourth seat. That makes for a lot of points of weakness for Republicans to defend in an environment that grows more politically hostile by the day.”

With that, check out Professor Bitecofer’s entire analysis, which is top-notch (I agree with pretty much all of it, although I’d probably make VA-02 “Likely D” and VA-07 “Lean D”), as well as the following “takeaways” that jumped out at me. What jumped out at you?

P.S. For more thoughts on Professor Bitecofer and her analytical efforts, see CNU Professor Rachel Bitecofer Is Really Having a Moment. And That’s a Very Good Thing. 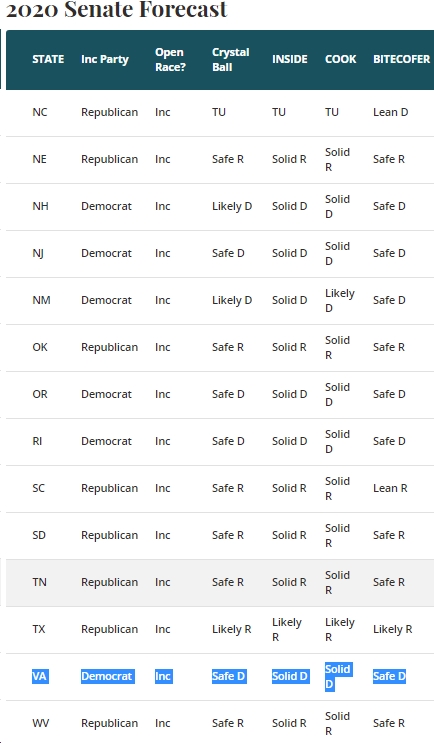 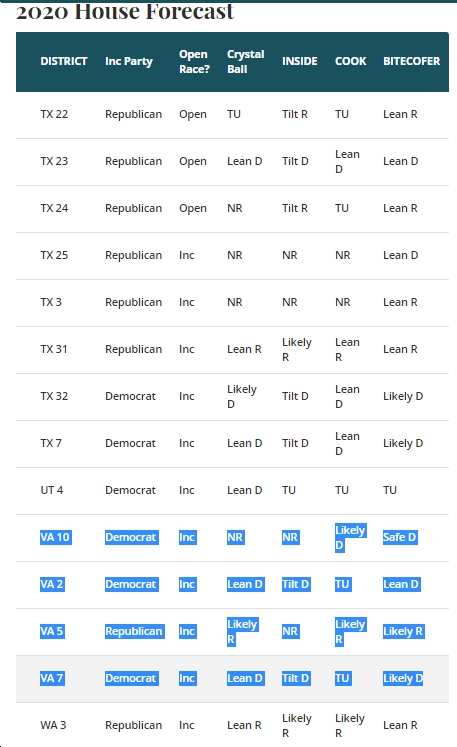