Contrary to everything we know about the COVID19 virus, the federal government has ended funding for COVID19 testing sites. It is no wonder then, that the United States officially owns the world’s single worst response to the global COVID19 pandemic. The only way out of this mess is for the American people to stand together against the cruelty and injustice that got us here.

The Guardian published a horrifying report on the devastation caused by the White House’s and GOP’s total denial of science, and thus failure to protect us post January 29. The President’s defenders cite his late January decisions of creating the Coronavirus task force, enacting the travel ban from China, and declaring a public health emergency, as evidence he took the pandemic seriously. But this argument is short sighted. Trump never actually enacted a travel ban to China, and his anecdotal actions post January 20 do not undo the years of science denial that enabled this pandemic in the first place.

In 2017, President Obama’s team provided the Trump team a detailed overview of the pandemic response manual—built on the knowledge gained from the H1N1 and Ebola outbreaks. Attendees report that Trump’s team wholly ignored the briefing altogether. In 2018, Trump fired the CDC’s pandemic response team, claiming it was a waste of money. Experts warned this firing risks leading to pandemic—no one in the White House or GOP bothered to listen. Likewise, in 2018, Trump left 700 CDC jobs unfulfilled and slashed the CDC Budget on preventing global pandemic by a shocking 80%. Once again, no one in the White House or GOP saw a problem with this.

But it wasn’t just independent experts warning of Trump’s dangerous anti-science approach that Trump ignored. US Intel repeatedly warned in 2017, 2018, and 2019 that the United States was horribly underprepared for a pandemic and would suffer horribly if hit. Trump and the GOP did nothing.

Finally, last summer Trump’s own team ran an analysis and warned that a respiratory virus could lead to a pandemic and kill up to 586,000 Americans. Trump’s own team’s warnings went unheeded, and Trump refused to act to protect Americans. Instead, a few months later, and just a few months before the COVID19 pandemic, Trump axed CDC’s expert in China, positioned there to monitor outbreak developments. Finally, a January 2020 US Intel Report warned that a pandemic is upon us, China is lying, and we must act ASAP to stop the spread. President Trump ignored the report and instead tweeted out praise of China’s alleged transparency, thanking them, and assuring Americans there was nothing to worry about.

And the cruelty and maliciousness still hasn’t stopped. Even this March, as a federal court blocked Trump’s attempt to enforce a work requirement that would strip 700,000 low-income Americans from food stamps, Trump is suing to lift the block. At every junction where a decision point could have prevented the spread of the COVID19 virus, Trump specifically chose the one contrary to science.

Furthemore, a complicit Republican party continues to enable Trump. Representative Rob Wittman (VA-1), for example, is a public health scientist with a PhD—by no means ignorant to science. Yet, throughout Trump’s reckless cuts to the CDC, disregard of intel reports warning of the pandemic, and selfish response post January 20th—Wittman has done nothing but enable Trump’s anti-science actions. Even when Rep. Wittman became aware of the pandemic’s presence in the United States in early February, he responded on February 27 by quietly purchasing himself stock in a pharmaceutical company working on a potential COVID19 vaccine. Adding insult to injury, Wittman then emailed his entire constituency through March 4, falsely assuring them, “At this time, this virus is NOT currently spreading in the community in the United States.” (emphasis his). Obviously, this was dangerously untrue.

A month after Trump claimed without evidence that “anyone can get tested,” the Federal government is cutting funding for testing. More Americans will die as a result. And America will continue to lead the world in the worst possible response to COVID19.

Republicans and Democrats disagree on many policies—but science cannot be one of them. This isn’t a difference in policy. It is abject cruelty. The only hope Americans have to survive this pandemic is to stand together for justice as the United States. Unity is how we got this far as a nation, and unity is how we will thrive moving forward. 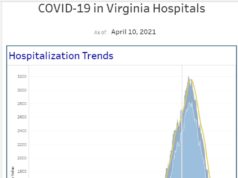