What have Virginia Republicans and right wingers been talking about the past couple weeks, in the midst of one of the most serious crises our nation has ever faced? To put it mildly, the following folks clearly haven’t risen to the occasion. See below for a small sampling of the crazy; I’ll add more as I see them:

Let’s start with the Virginia GOP’s bizarre accusation that, by setting his “stay-at-home” order for June 10th – one day after Virginia primary elections – somehow this is engaging in “voter suppression,” apparently aimed at Republicans. Except that: 1) there are *both* Democratic and Republican primaries that day, while in VA05 and VA07, Republicans are actually choosing their nominees via convention, being held *much* earlier than June; 2) these aren’t *general* elections, but intra-party primaries, so how would “voter suppression” hurt Republicans?; 3) of course, Virginia Republicans for many years now have opposed measures to make it easier for people to vote, including presumably ideas like expanding vote-by-mail capabilities big time. So…yeah, they are completely full of it. 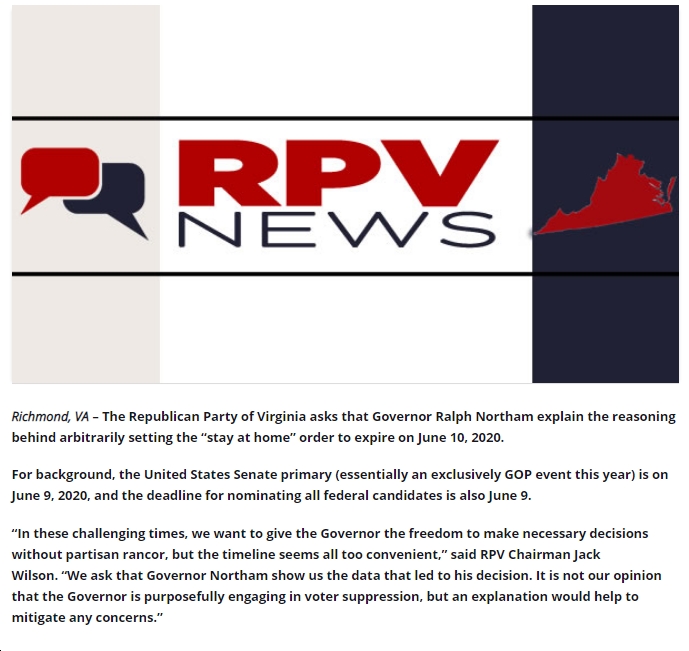 Courtesy of former Democratic candidate Ben Hixon, check this out…very telling that Virginia Republicans are focused on circling the wagon (Trump) and claiming anyone who criticizes his pathetic failure to lead in this crisis isn’t just “after him,” they’re “after you…he is just in the way!” Classic, far-right populist rhetoric like you see in places like Hungary, where the authoritarian “strongman” there is engaged in a “pandemic power grab.” Yeah, don’t give Trump any ideas, right? 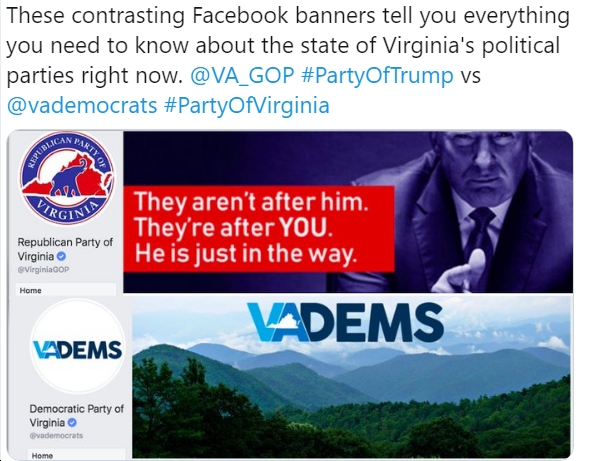 The Virginia GOP is also, apparently, totally cool with use of racist, anti-Asian language to describe the virus…which, of course, being a virus, has no nationality, ethnicity, etc. 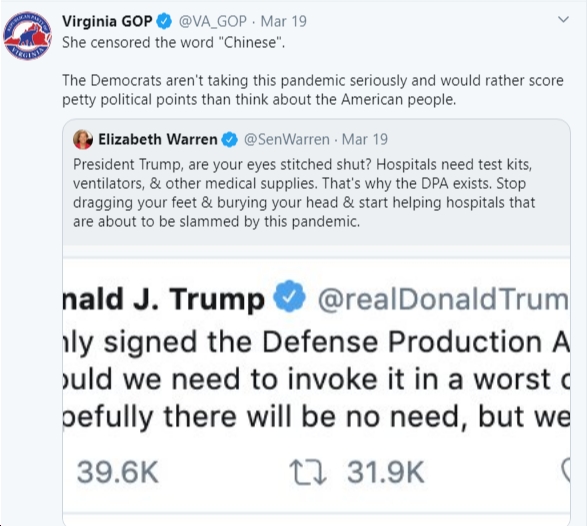 Of course, they can’t help themselves, going for the Dems are Commies meme. Original and creative, eh? 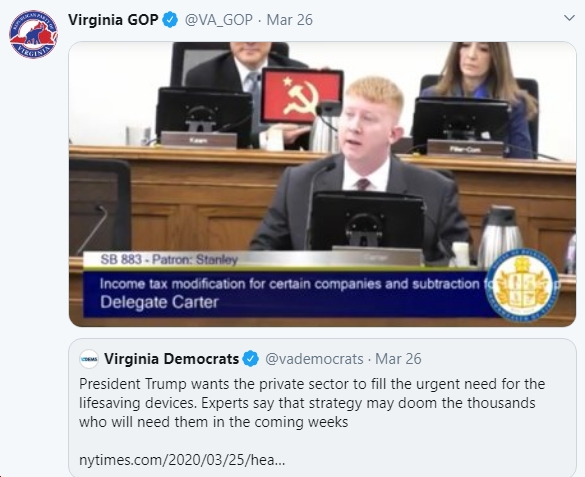 And they’re constantly claiming that Democrats, supposedly, only care about “scor[ing] political points,” which yet again with Republicans, is a classic case of psychological projection. Look in the mirror, guys, if you want to know what “shameful” is. Meanwhile, Democrats have been working their butts off to pass several major federal economic rescue packages (all of which Trump signed, by the way, so…wait, is this stuff good or bad?!?), as well to rescue their states from both the COVID-19 virus and the White House’s utter incompetence.

Another case of psychological projection, from the same party that point-blank stated – in the middle of an economic meltdown, no less – that they wanted nothing more than for President Obama to “fail.” As for Sen. Warner, he’s been one of the most effective and hardest-working U.S. Senators, playing a major role in negotiating and passing the massive, $2 trillion economic “stimulus” last week. All while Virginia Republicans sit back in the cheap seats and take potshots. 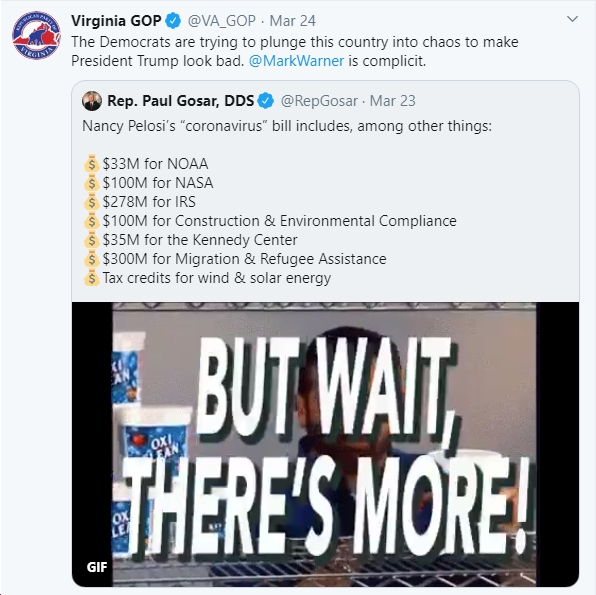 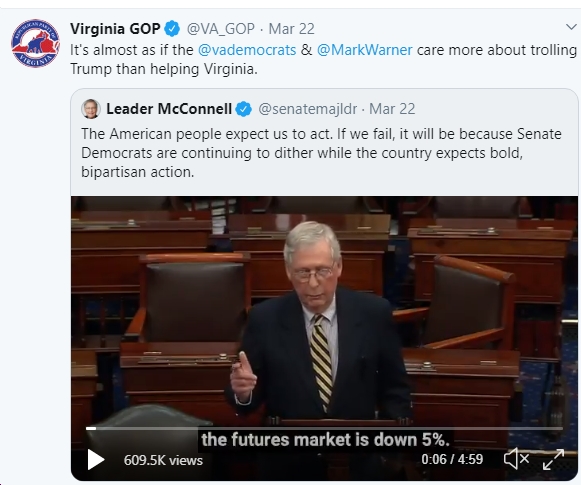 Then there’s Del. Nick Freitas (R), the front-runner to be the VA-07 GOP’s nominee for Congress against Rep. Abigail Spanberger (D) this fall. He’s busy bragging about his endorsement from – seriously, you can’t make this shit up – Jerry Falwell, Jr., the same guy who’s become a national disgrace and all-around laughingstock for his wildly irresponsible, reckless behavior during the COVID-19 crisis. As former Sen. George Allen (R) once said, “You can tell a lot about people by the folks they stand with.” In Freitas’ case, he stands with Jerry Falwell, Jr. ‘Nuff said. 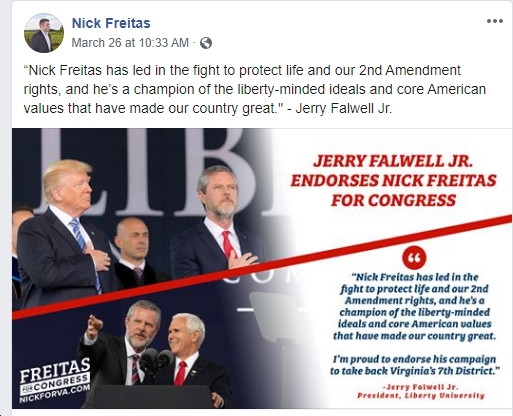 Freitas is also busy with demagoguery and fear-mongering about the 10-person limit set by Gov. Northam and many other leaders around the country. A mature, serious, responsible way to handle this, of course, would be as Delegate and Pastor Luke Torian did a few days ago, urging his church’s worshippers to do so virtually. But nope, not Nick Freitas… 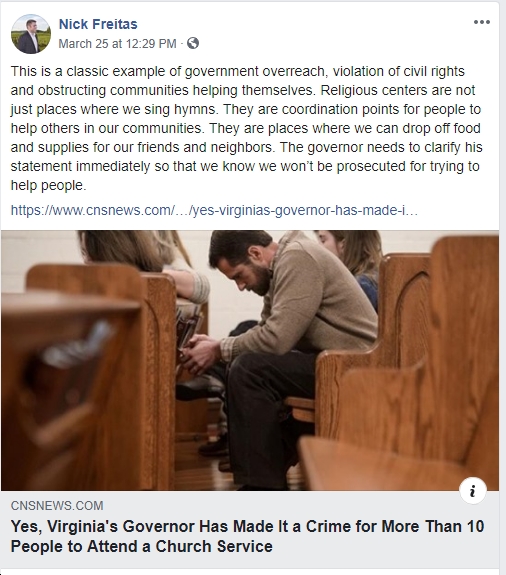 Then there’s this idiocy from Freitas, blathering about supposed “politicized hostage taking.” Who the hell knows… 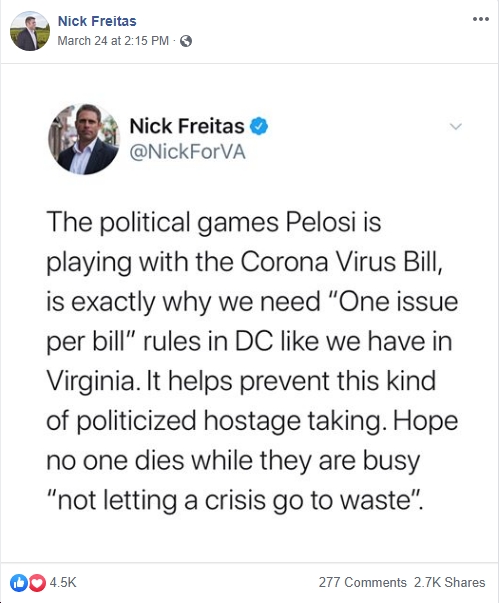 Let’s not forget Virginia-based Trumpster radio, aka “The John Fredericks Show,” which yesterday had on Rep. Rob Wittman (R-VA01) to claim that moving on to a new economic “stimulus” now would be “crazy”; and our old pal EW Jackson, the VA GOP’s 2013 nominee for Lt. Governor, who ranted that Gov. Northam has “no authority to trample on your rights.” 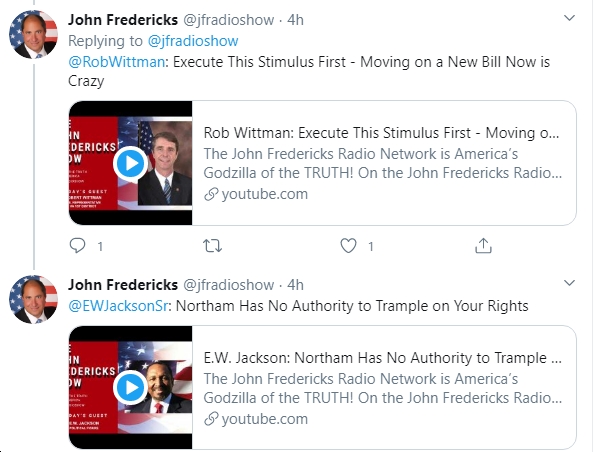 And, of course, Fredericks had on one of his frequent guests, State Sen. Amanda Chase, who delighted the Trumpsters listening to the show with similar rhetoric to Jackson’s, claiming (falsely, of course) that Northam’s stay-at-home order is “dictatorial over reach [sic].”

Speaking of Chase, check this lunacy out, as it’s got it all! “Gun grabbing [sic] socialist Ralph Northam!” Northam, along with “his favorite House Speaker Filler-Corn and Senate Majority Leader Saslaw are holding our State [sic] hostage.” “Virginia has now been bought and paid for by Mike Bloomberg!” “And now he will not even allow us to attend church services!” “Virginia Socialist swamp!” etc. 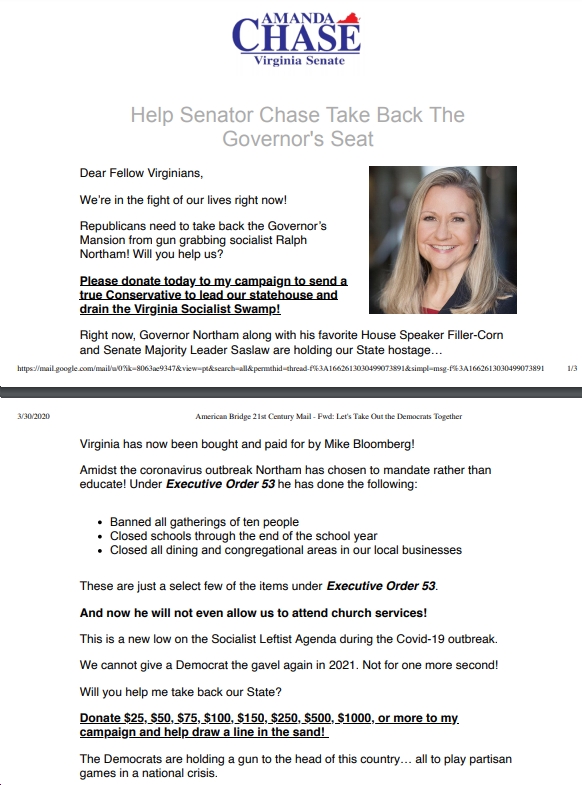 And then there’s…this. WTF? Basically, every sentence in here is some combination of wrong, crazy, bizarre, etc. Read through it and see how many falsehoods you can find. But put aside some time, because there’s a lot to unpack here… 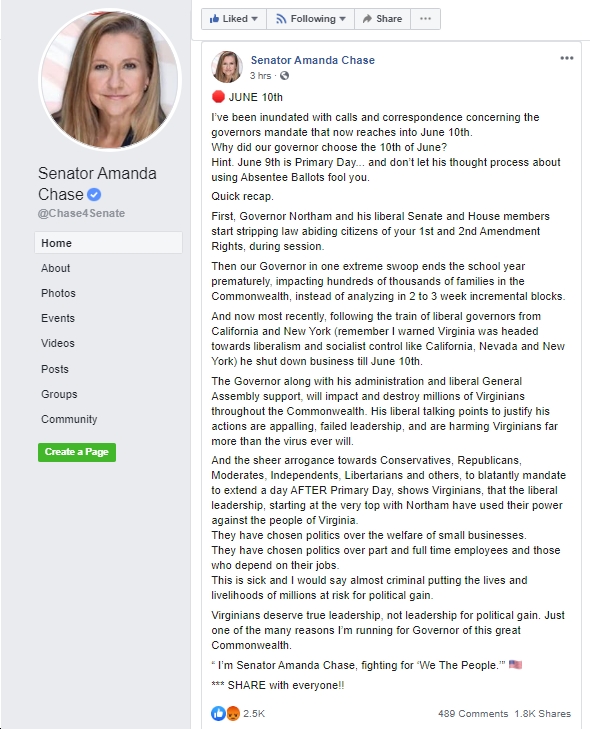 Oh, and thanks to Democrat Qasim Rashid for calling out the following meme, being spread by many right wingers, minimizing the COVID-19 situation by comparing it to other causes of death. As Rashid says, “if you find yourself rationalizing the preventable death of 200k people – Please reevaluate your life.” Exactly. And see below Rashid’s post for a perfect example of what he’s talking about, from a right-wingnut Virginia political blogger… 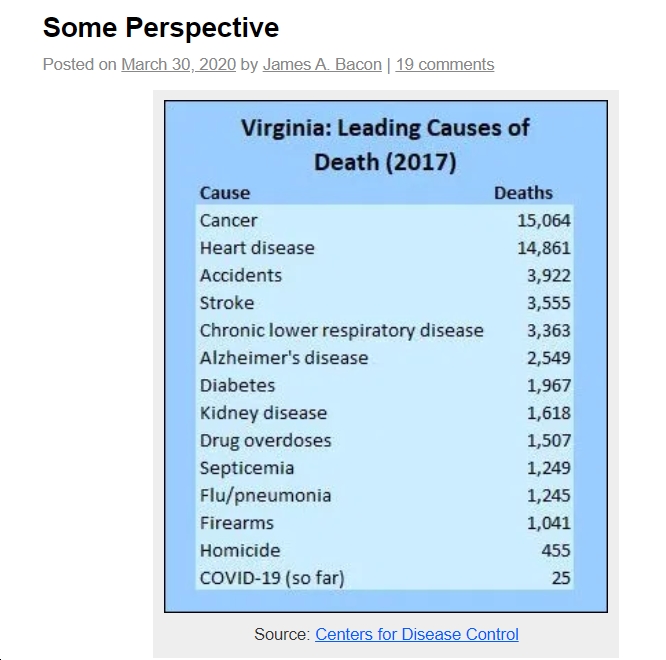 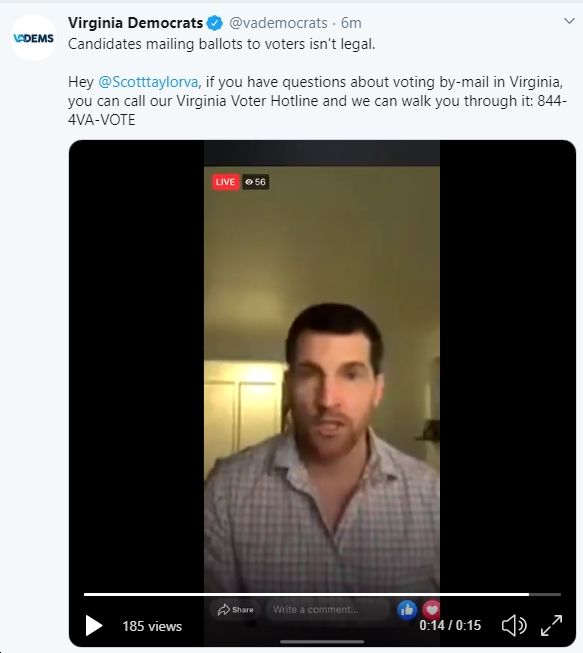 Finally, check out what former VA GOP Chair John Whitbeck – who got crushed this past November for Loudoun County Board Chair by Democrat Phyllis Randall – is spewing out. Recall how this guy tried to reinvent himself as a “moderate” for the Loudoun County Board Chair race? Clearly, it didn’t work…because he’s most certainly no moderate, and voters could see that clearly. 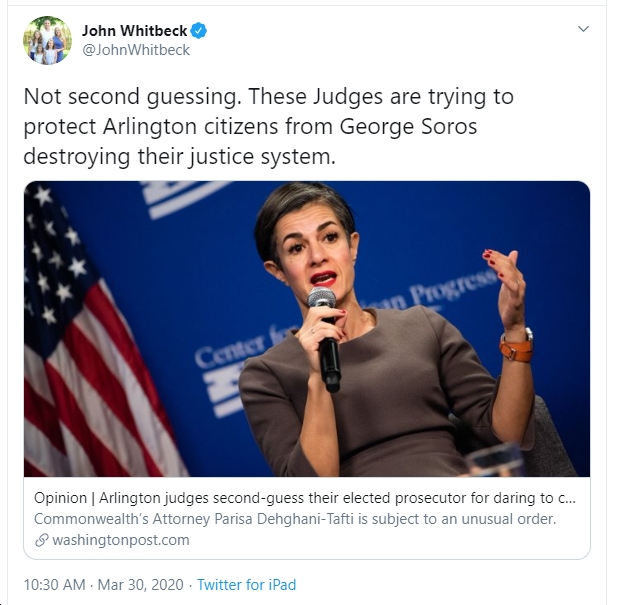 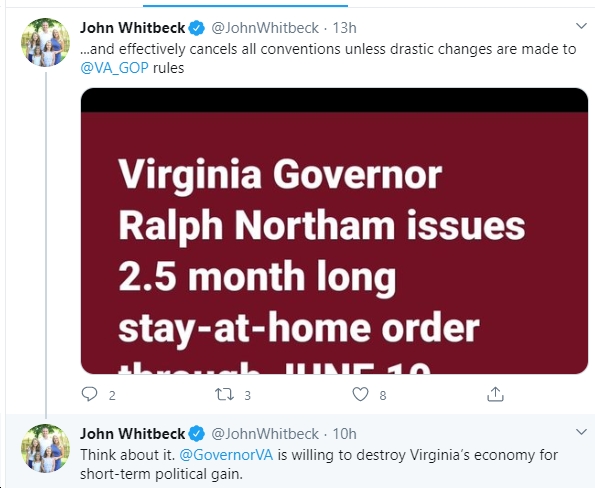 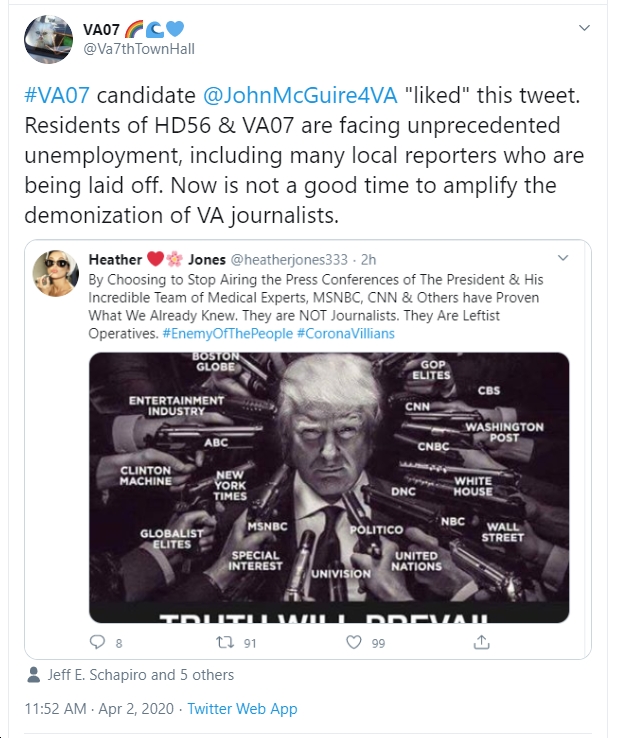