From the Arlington County Democratic Committee:

Friday, May 1, 2020, ARLINGTON, Va.—The Arlington County Democratic Committee (Arlington Democrats) this afternoon joined Arlington County in asking the Virginia Supreme Court to extend by two months the date of the July 7 special election to fill an open County Board seat. An extension would allow all political parties time to conduct inclusive candidate nominating processes during the coronavirus pandemic.

The Arlington County delegation to the Virginia General Assembly also issued a statement Friday afternoon supporting the County and Arlington Democrats in asking for the extension.

The commonwealth last week set the date of the special election to fill the seat suddenly left open after the April 16 death of Board Member Erik Gutshall. Virginia’s election law means that a July 7 special election translates into a mere 14-day window for political parties to conduct their nominating processes.

“The resulting 14-day window for political parties to conduct their nominating processes is aggressive even under normal circumstances,” Arlington Democrats Chair Jill Caiazzo wrote in the letter to the commonwealth Supreme Court. “During a pandemic involving unprecedented social distancing measures, it is impossible for a political party to safely run a nominating process open to the public in this amount of time.”

Vote-by-Mail Safest and Most Inclusive Option

During a pandemic, the best, most inclusive option to nominate a candidate is to conduct a vote-by-mail process, which will take at least two months, the letter states, based on Arlington Democrats’ current experience conducting a vote-by-mail endorsement process for two open Arlington School Board seats, which will continue until May 30. From a public health perspective, mail-in voting is the safest option, which is why the Centers for Disease Control actively encourages its use.

“Arlington Democrats has both the resources and the will to hold an open vote-by-mail nomination process for the Arlington County Board special election over a two-month period,” the letter to the state Supreme Court states.

The issue brings both the First and 14th Amendments to the U.S. Constitution into play, the letter argues. “The right to associate with the political party of one’s choice is an integral part of basic constitutional freedom,” the letter states. “Consistent with this principle, the U.S. Supreme Court has struck down state laws that unduly infringe upon the associational rights of political parties.”

The letter cites very recent Virginia court decisions that have upheld adjustments to commonwealth law “governing elections [that] have been necessary in light of the current pandemic.”

Such an extension would allow the political parties to safely run a vote-by-mail nomination process that is open to the public during this public health crisis,” the county’s General Assembly delegation noted in its statement of support of the county’s and Arlington Democrats’ request. “It is our hope that the Court will exercise its equitable powers in granting this request.”

Short of an extension of the County Board special election date, the unreasonable 14-day deadline will leave Arlington Democrats no choice but to select its nominee through “a closed nomination process limited to the leadership of the Arlington Democrats,” the letter states. The letter also notes that a court-ordered extension would have to be issued by 7 p.m. EDT on May 6, 2020, to prevent the Democratic nominee from being determined by the closed nomination process alternative.

The letter goes on to add that the rules governing that leadership caucus “expressly envision the transformation of the closed nomination process into a vote-by-mail nomination process open to the public—if the special election timeline is sufficiently extended to permit Arlington Democrats to run such a process.”

Information about the Arlington Democrats’ County Board special election nomination process is updated as developments occur. 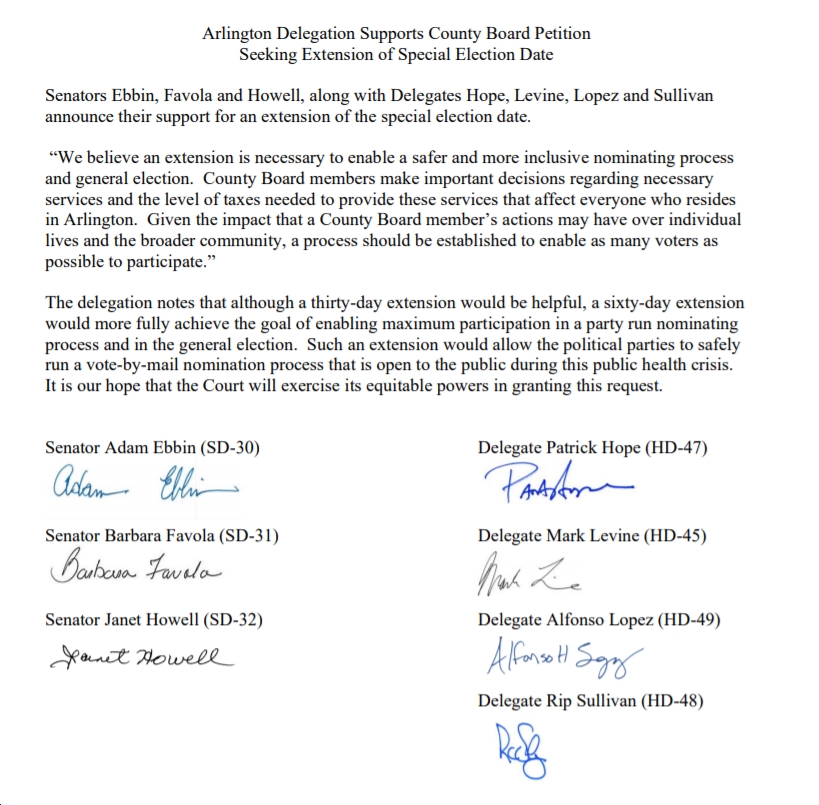 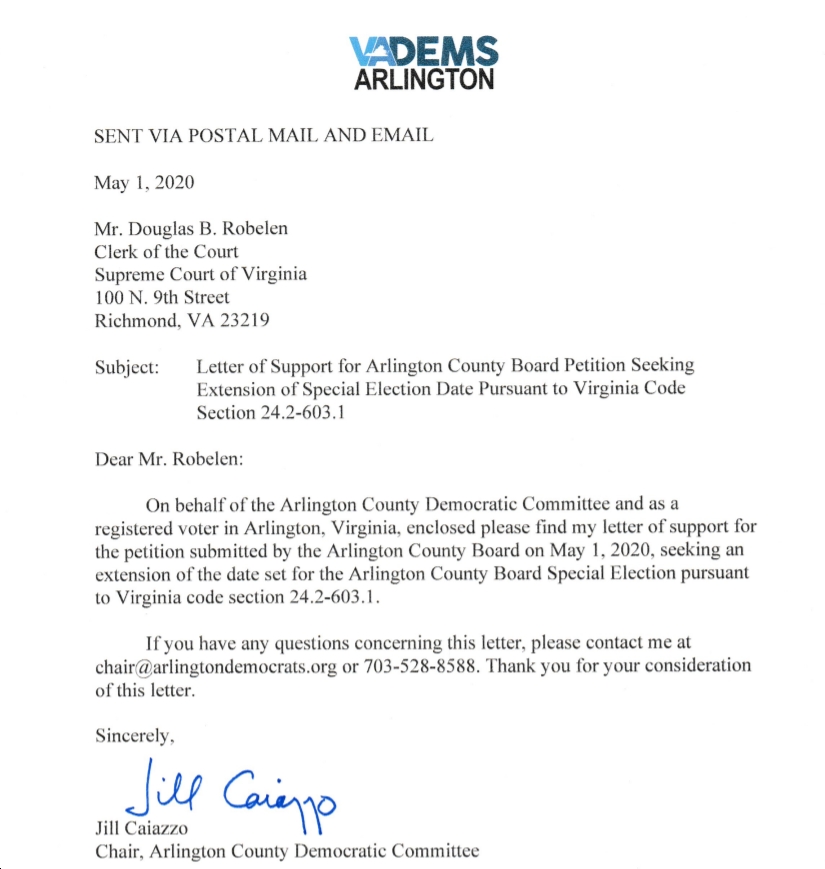 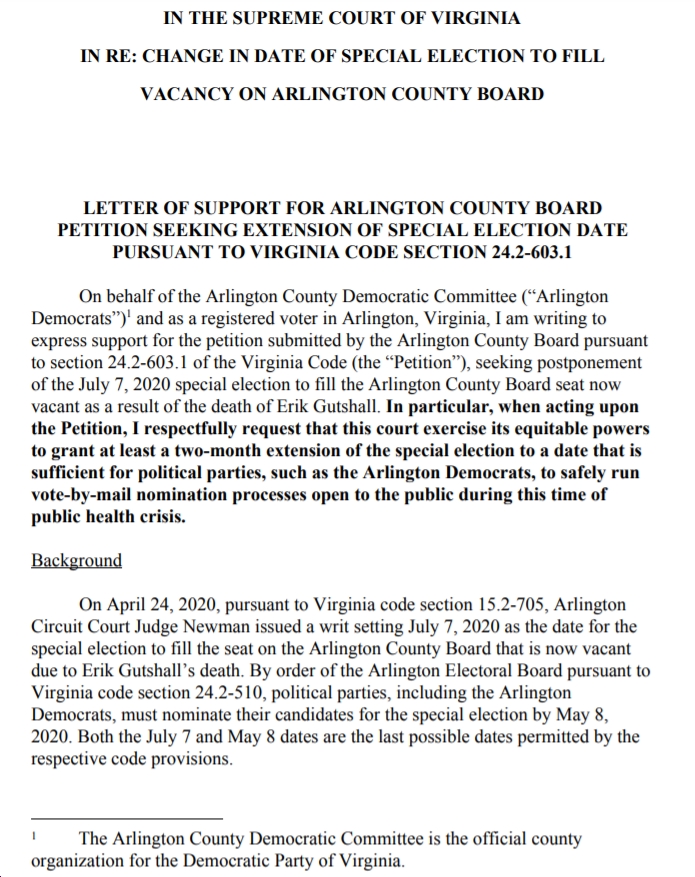 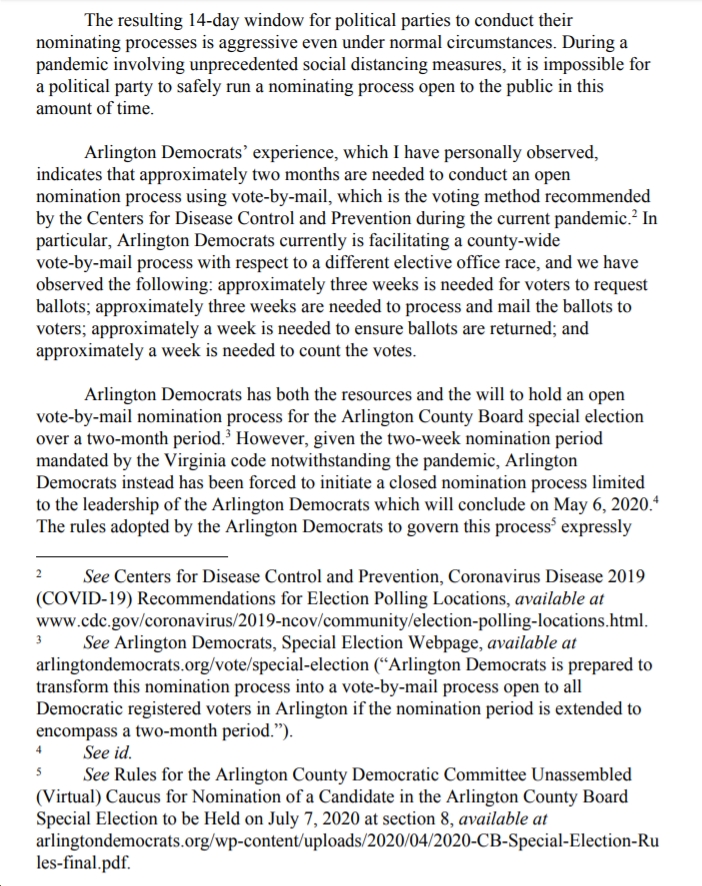 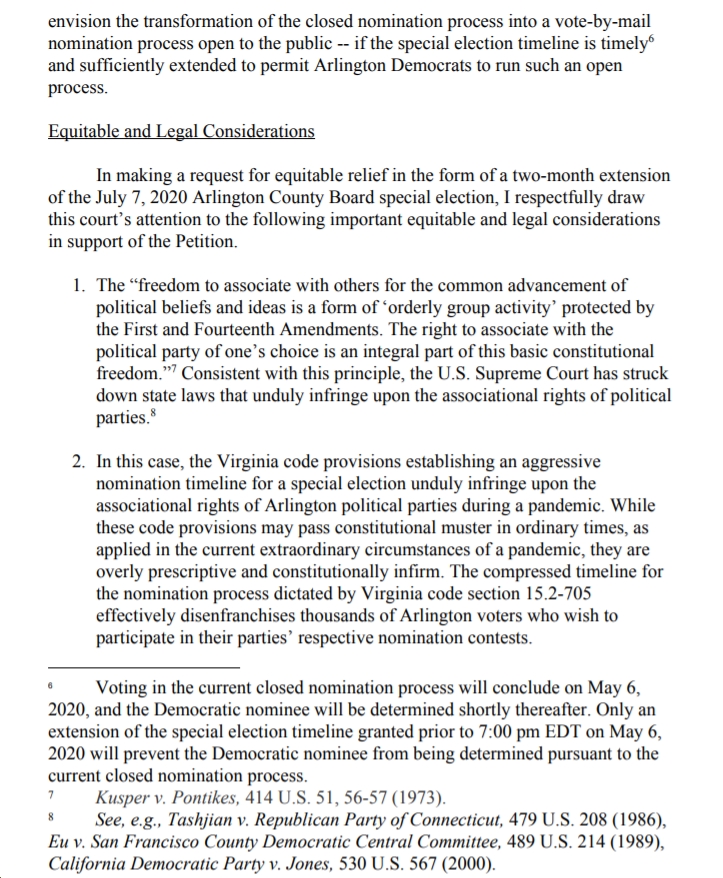 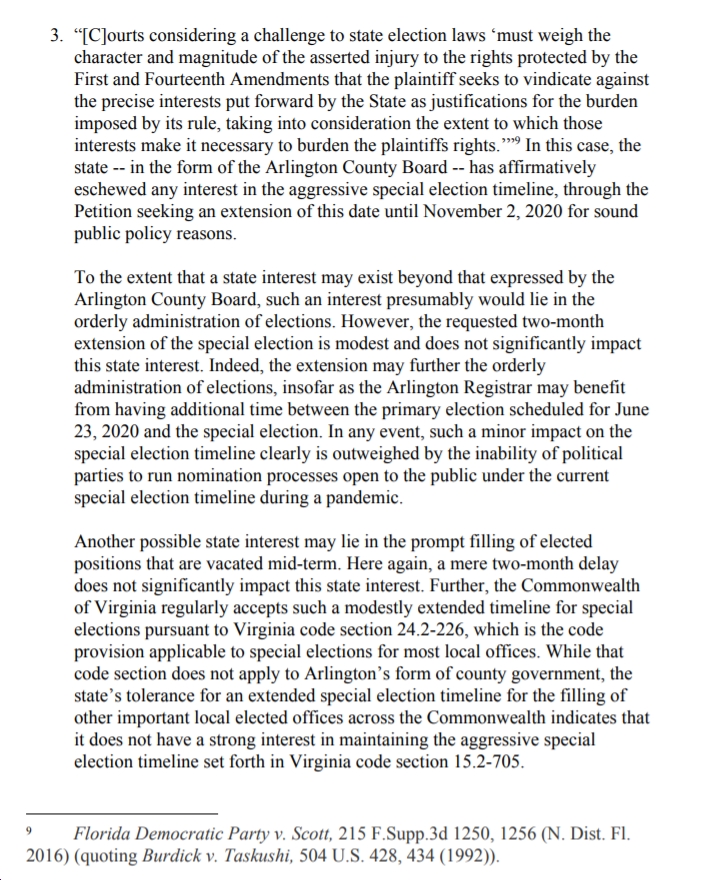 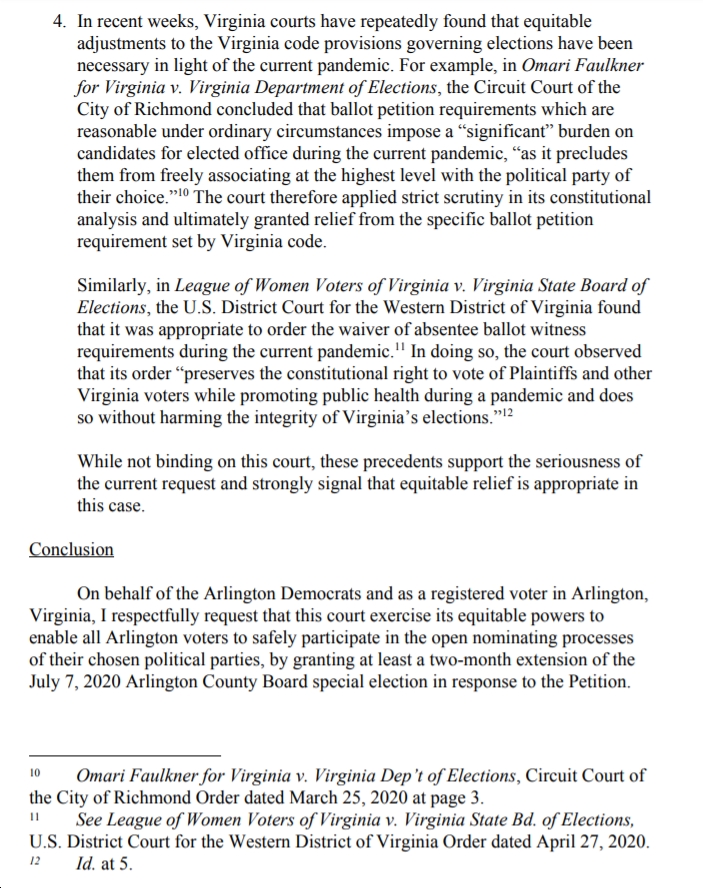 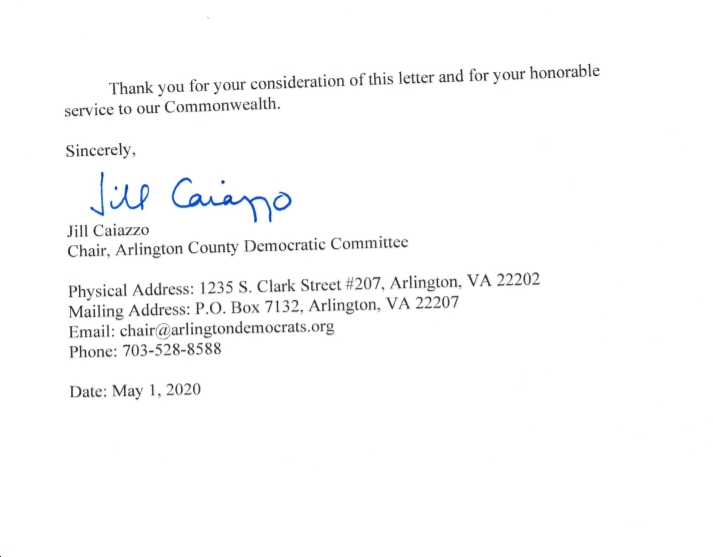