See below for a graphis, courtesy of VPAP, on the value of Virginia legislators’ securities portfolios. Given how often we hear that there’s an inverse relationship between wealth and progressivism, I thought it might be interesting to compare these portfolio numbers to legislators’ 2020 VAPLAN progressive scores to see if there’s any correlation. Here’s what jumped out at me from these numbers. 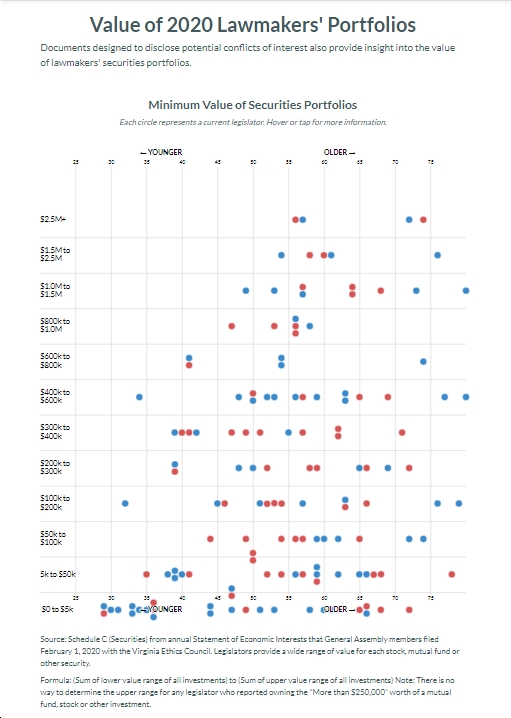 UVA Weekly #COVID19 model report: "Vaccination rates are the driving factor behind the wide regional variation. Estimates for vaccine acceptance rates vary from a low of 41% in the Eastern Region to 87% in the Northern Region." https://bluevirginia.us/2021/05/friday-5-7-virginia-data-on-covid-19-lowest-10-day-new-covid-cases-since-10-9-20-positivity-rate-at-4-4#comment-5374215338

Summary of the polling in the VA GOP gubernatorial race so far. The unassembled convention is *tomorrow*, starting at 9 am. https://bluevirginia.us/2021/05/new-poll-of-va-gop-primary-voters-amanda-chase-22-glenn-youngkin-21-pete-snyder-16-kirk-cox-7-61-of-amanda-chases-voters-believe-the-convention-will-be-rigged