First, here’s the latest from Amanda Chase (yes, the same person who said “It’s those who are naive and unprepared that end up raped” and “The ERA Amendment is nothing more than a ploy by the left to eliminate gender altogether.”). According to Chase, she will not be “masked, tested, tracked or chipped to support this liberal agenda.” Uh, yeah, that would be that infamous “liberal agenda” of following the science and the health experts, in attempting to slow and stop the spread of a deadly pandemic, which has already killed around 100,000 Americans. Brilliant. Oh, and so far, this post by Chase – early Sunday morning, on Memorial Day weekend, when probably most people were still asleep – already has 1,700 “likes”/”loves” plus 171 comments (overwhelmingly positive) and 409 shares. Great, huh? (p.s., what does she mean by “in lieu of?” perhaps she means “with regard to?” yet again, English as a foreign language to AmanDUH) 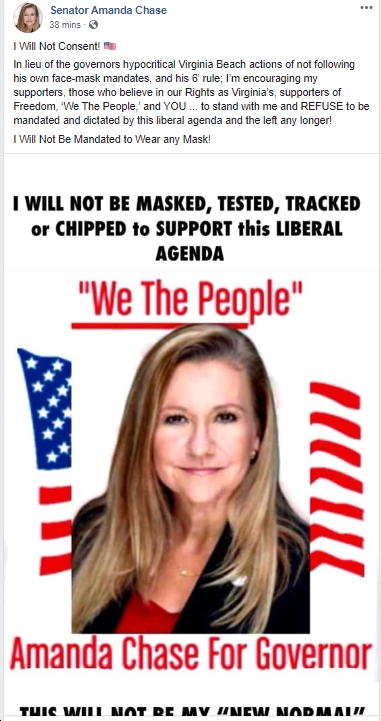 And then there’s former Prince William County Board Chair, and 2018 VA GOP U.S. Senate nominee, Corey Stewart, who posted a video yesterday that already has 100,000+ views, 1.5k comments (overwhelmingly positive) and 2.3k “shares.” See below for “highlights” from the video, including: