See below for an email from the Alliance for Housing Solutions, as well as responses to their questionnaire from three of the four Democratic candidates (Barbara Kanninen; Chanda Choun; Takis Karantonis; no response from Nicole Merlene for whatever reason) in the special election for Arlington County Board. Currently, pending a possible decision by the Virginia Supreme Court in the next few days, the special election is set for July 7th, which has forced the Arlington County Democratic Committee (ACDC) into the absurd position of having to select a nominee in just a few days, meaning that it’s going to be done – again, unless the Supreme Court intervenes, which they hopefully will! – by 260 members of ACDC. Obviously, that’s not good, and to its credit, ACDC is pushing hard for more time, so that all Arlington Democrats can participate in the nomination process for a new County Board membger. As it stands now, though, the nominee will be selected by this Thursday by ACDC membership.

Anyway…on to the Alliance for Housing Solutions email and questionnaire. I read the responses, and they are all strong. Having said that, I particularly liked Takis Karantonis’ responses, among other things for the depth and breadth of knowledge he displays on this topic. That includes important, wonky stuff like “Form-Based Code” and “Missing Middle housing,” both of which were things that former County Board member Erik Gutshall – whose resignation from the Board as he battled brain cancer triggered this special election – understood deeply and championed as a Board member. The loss of Erik Gutshall leaves a major hole in those areas, and we really should be looking to fill that in as much as possible in this special election, IMHO.

[UPDATE: Also, see here for the candidates’ responses to Greater Greater Washington’s questionnaire on “urbanist issues” – check it out!]

The Alliance for Housing Solutions is a nonprofit organization in Arlington that works to increase the supply of affordable housing in our area. AHS was founded in 2003 by civic leaders who were concerned that Arlington was becoming a place where only the affluent could afford to live.

AHS has a tradition of asking candidates running for the County Board to answer a set of questions related to affordable housing. We post candidate answers in full on our website and publicize them through local media and social media channels. Because we do not support individual political candidates, AHS does not evaluate or rate these responses.

Arlington County has called a Special Election (to be held on July 7, 2020) to fill the seat vacated by the tragic passing of Arlington County Board member Erik Gutshall. The candidates for the Democratic nomination are: Chanda Choun, Barbara Kanninen, Takis Karantonis, and Nicole Merlene. To date, no Republican or Independent candidates have put their names forward. Nominations are due by May 8.

The questions provided to the four candidates for the Democratic nomination are:

Since adopting its Affordable Housing Master Plan in 2015, Arlington has only reached about half of its yearly goal of 600 new or preserved committed affordable rental units. What steps, if any, should the County take to meet this goal?

What are your top two housing priorities for the County over the next five years?

What kinds of other new ideas or innovative approaches could the County pursue to improve housing affordability in our area?

Their unedited answers are posted on our website and attached.

Note: No responses were received by the Merlene campaign. 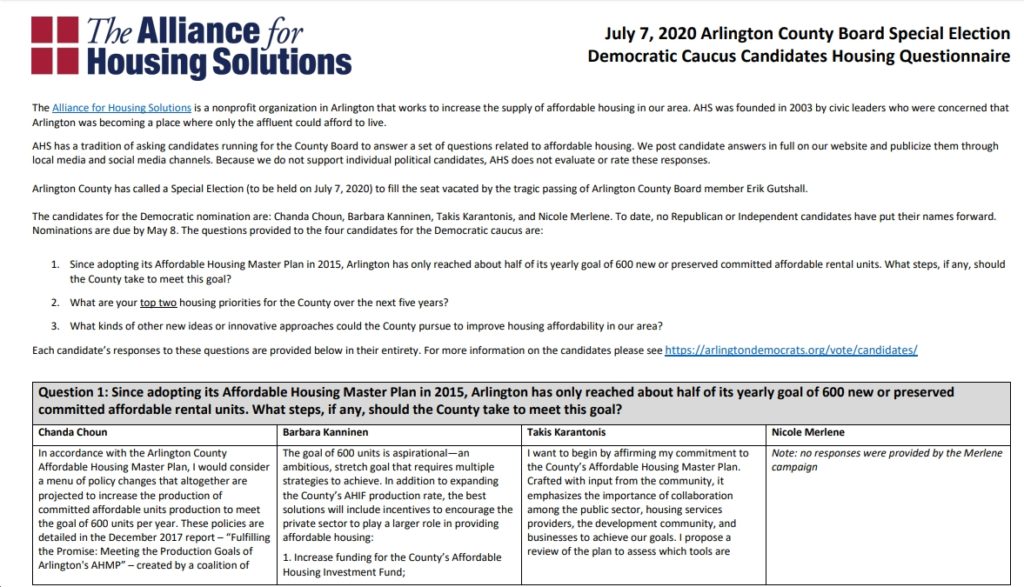 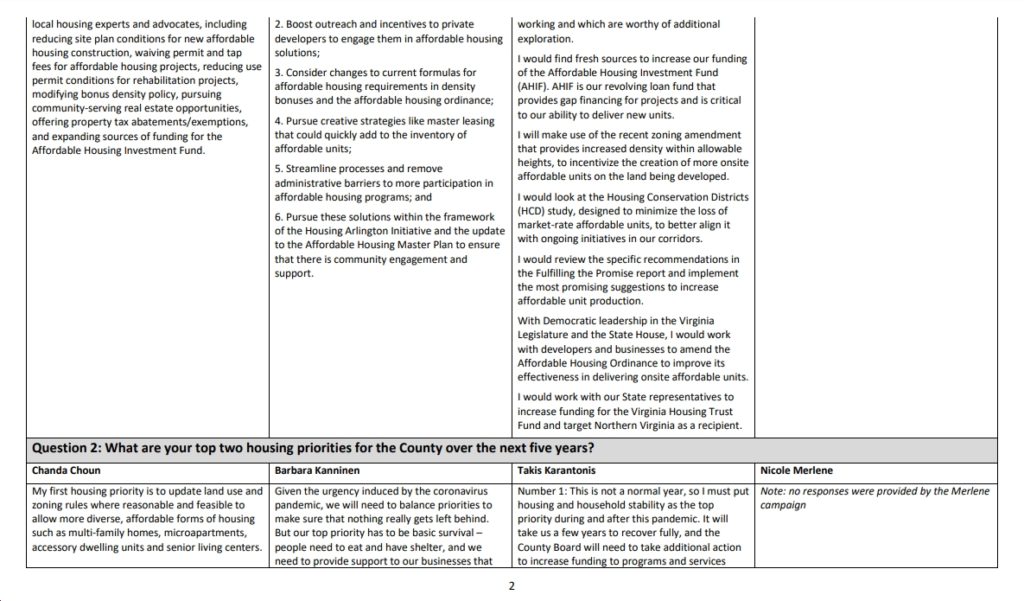 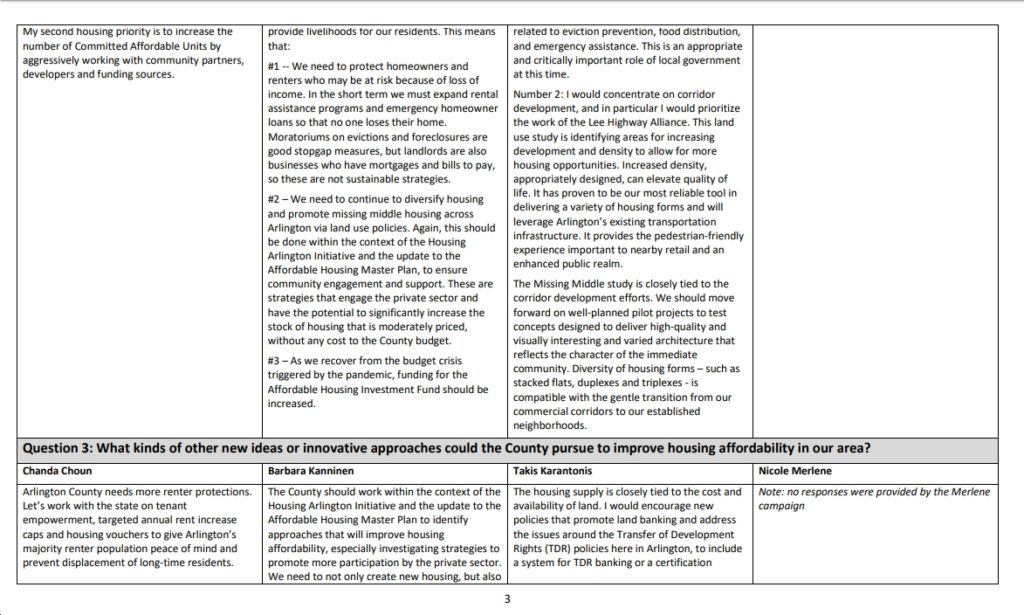 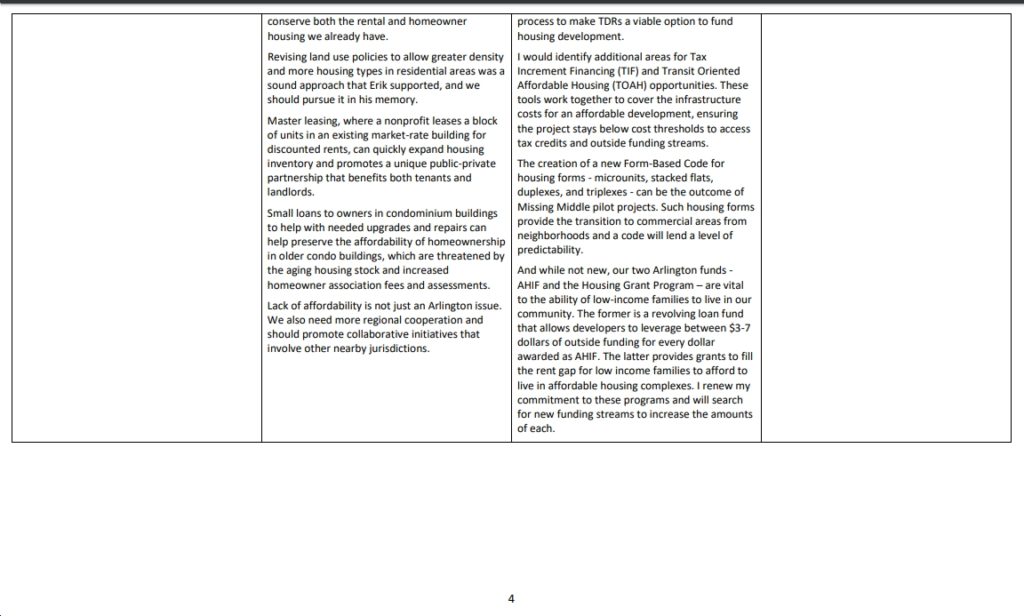