See below for a press release from the Sierra Club’s Virginia chapter, and also click here for the full scorecard. A few things jumped out at me:

For the first time, a majority of one chamber received a 100 percent grade, signaling a state shift towards prioritizing environmental and climate protection

House Speaker Eileen Filler-Corn stated, “Virginians expected new leadership to take bold action on energy and climate issues, and we prioritized the environment during this session. I was pleased to work with Sierra Club to deliver progress on clean energy policy, environmental justice, and climate change, and, as a result, Virginia is now a national example of excellence on all three fronts. I am incredibly proud of what we accomplished this session and even more excited for our continued work to maintain our Commonwealth’s leadership on these important issues.”

For the first time ever, the majority of a chamber tallied a perfect score, with 51 members of the House of Delegates achieving an “A+”.

“The passage of the Virginia Clean Economy Act, Solar Freedom and other climate legislation  has transformed Virginia into the South’s most ambitious climate leader”, said Bob Shippee, Legislative Chair of the Virginia Chapter. “Our scorecard helps voters understand if and how their representatives are moving the commonwealth toward the clean future Virginians need to thrive.”

“The General Assembly delivered some crucial climate and environmental protection legislation this year,” Kate Addleson, Sierra Club Virginia Chapter Director, said. “We commend the lawmakers who have prioritized climate solutions, and hope the nation will follow Virginia’s lead by electing leaders in 2020 who will act with the urgency challenges like climate change demand.”

“Last November, Virginians sent a clear mandate that they wanted their legislators to lead on climate action – and that produced major results this session,” said Sen. Jennifer McClellan (D-Richmond), who patroned the Virginia Clean Economy Act and the Solar Freedom Act. “2020 was the most consequential legislative session for clean energy in Virginia’s history, including the passage of the historic Virginia Clean Economy Act making Virginia the first state in the south with a 100% Clean Energy Standard. We couldn’t have made this progress without Sierra Club’s leadership in the clean energy coalition. And we have more work ahead of us to reduce Virginia’s reliance on fossil fuels, grow Virginia’s clean energy economy, protect front-line communities with a commitment to environmental justice, and take necessary action to tackle the climate crisis.”

With the rollback of bedrock environmental protections at the federal level, state leadership on climate has never been more vital. The Sierra Club Virginia Chapter sets a high scoring standard for lawmakers to receive a top grade. However, the new Democratic majority prioritized the environment, resulting in a record 10 state Senators and 51 delegates receiving a 100% grade on this year’s scorecard.

View the complete 2020 Climate, Energy and Justice Scorecard at vasierra.club/scorecard2020.

The Virginia Chapter represents over 20,000 members and twelve local groups across the Commonwealth, supporting a network over 100,000 strong. We welcome every Virginian to join the grassroots movement for climate solutions. Together, we can build healthy communities, connect with nature and ensure future generations can thrive. For more information, visit http://www.sierraclub.org/virginia 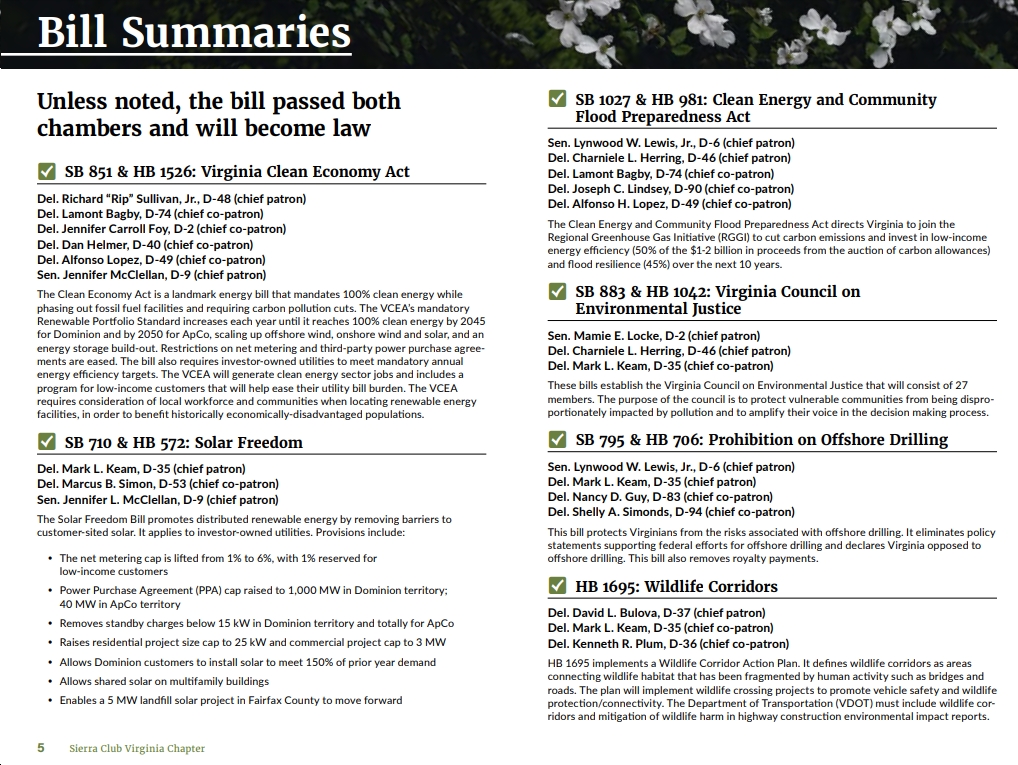 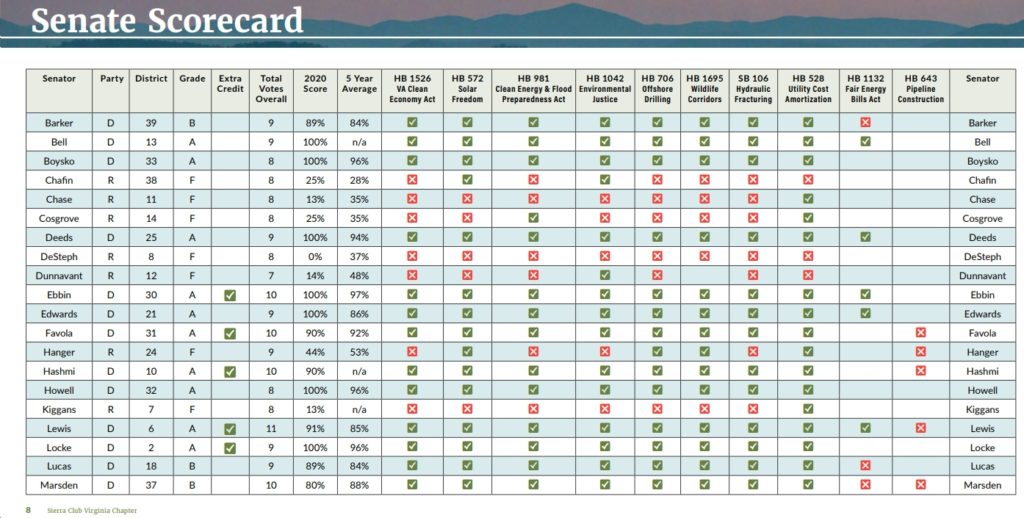 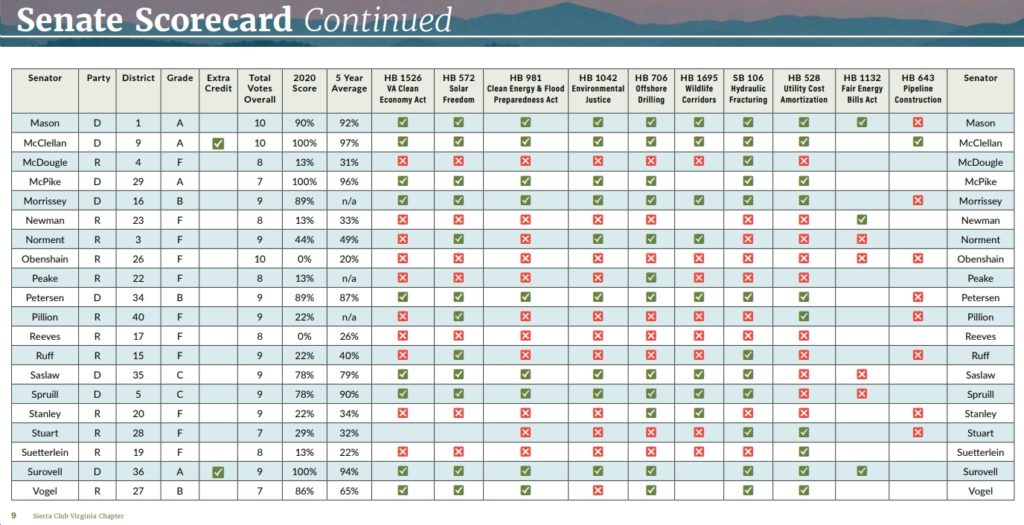 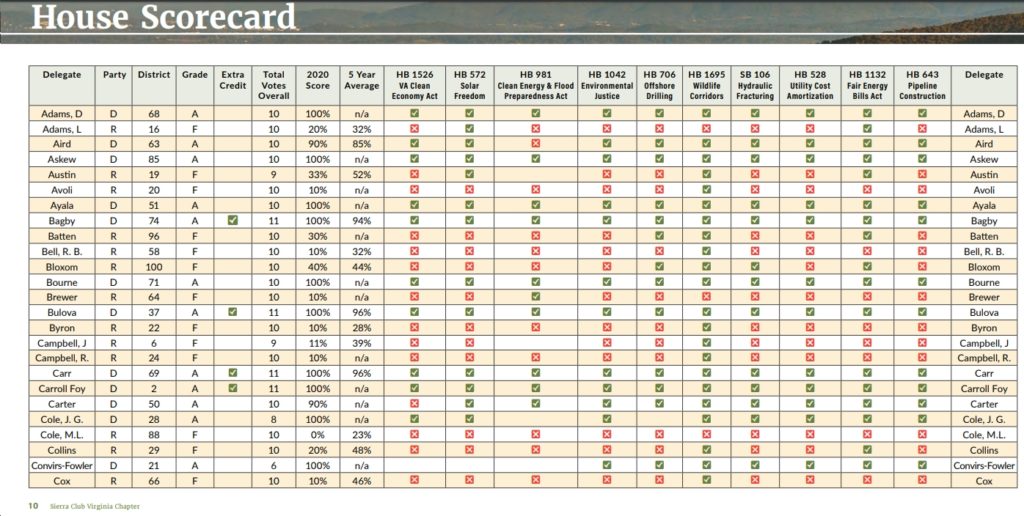 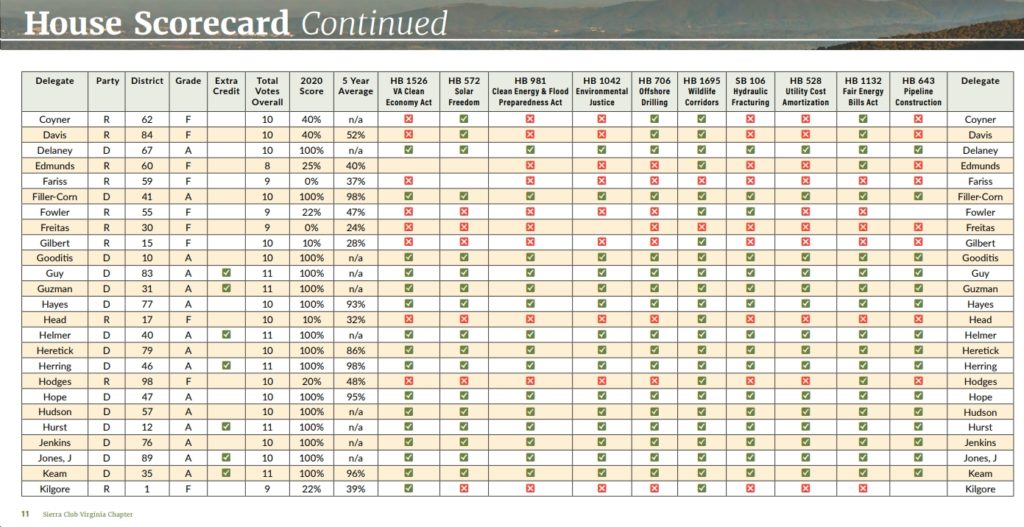 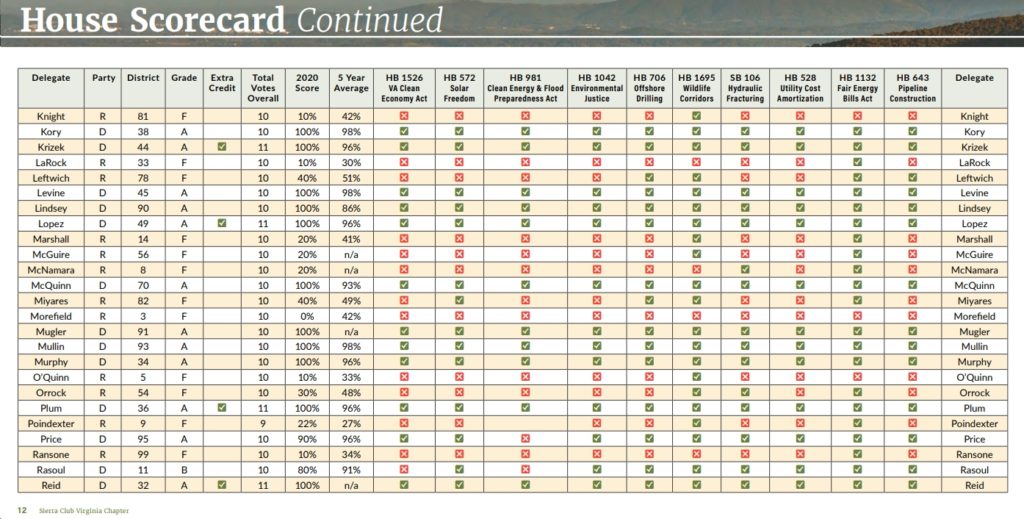 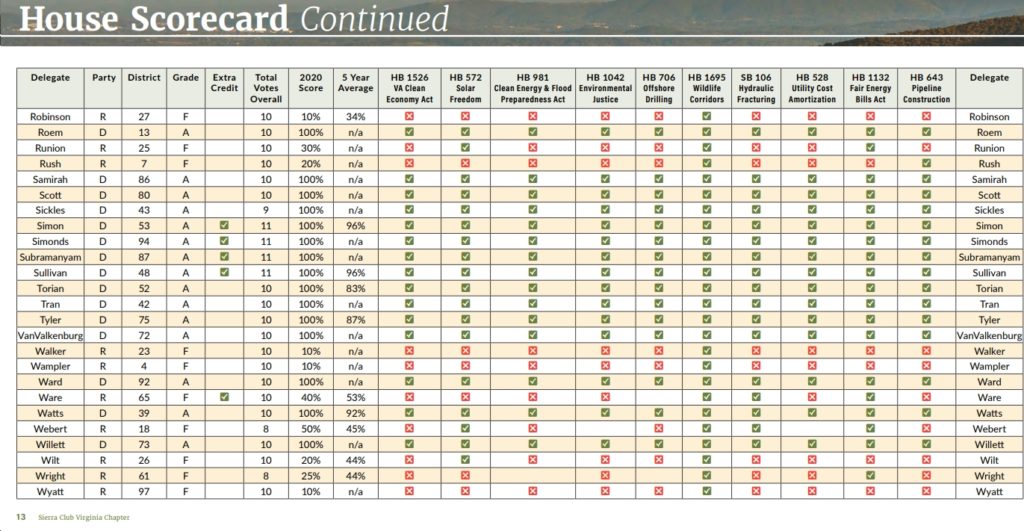