See below for Rep. Rob Wittman (R-VA01)’s statement, about how we “must come together as a nation, not tear ourselves apart…listen, understand and respect each other” – at the *same time* that Donald Trump, the leader of *his party* who Wittman absolutely refuses to criticize in any way, is stoking the violence, tearing the country apart, and absolutely NOT listening to, understanding or respecting people. Just check out his Twitter feed, if you can stand it, where he writes:

Yes, this is really our “president” and he’s really spewing this s*** out on Twitter (which refuses to kick him off, even though he’s massively violating Twitter’s own rules). As for Wittman’s reaction to all of this, it’s utterly pathetic, as usual, but so typical of people like him, Susan Collins, etc. – they say how “troubled” they are, or whatever, but in the end they do *absolutely nothing.” Worthless.

Also, see below for comments by Qasim Rashid – who’s running for the Democratic nomination in VA01 to take on the worthless Wittman – speaking a bit earlier today, after he attended a rally to honor the life of George Floyd and hosted a virtual town hall about “these systemic issues.” As Rashid so correctly says about Wittman’s statement:

“My Republican opponent put out one of the most tone deaf and offensive statements I’ve seen. He refuses, refuses to condemn police brutality. He just talks about the death of Ahmaud Arbery, as if they’re magically dying on their own, as if this is not a system of racism and white supremacy behind these horrific deaths. He refuses to condemn Trump’s call to, ‘when the looting begins, the shooting begins,’ an explicitly racist comment designed to advance a sense of white supremacy and kill people of color, particularly Black Americans. He refuses to condemn Trump’s call that the only good Democrat is a dead Democrat. He refuses to condemn Trump’s promotion of Nazi ideology last week. And he has the audacity to say that we are hurting and mourning. He has done literally nothing, literally nothing to hold accountable the violent injustices against people of color and against Black Americans in particular…he refuses to name the problem, name the issues that we are struggling…This is the man I’m running against.”

I just attended a rally to honor George Floyd & hosted a town hall in healing our nation.

My GOP Opponent posted an empty statement while refusing to condemn police brutality or Trump’s calls to violence. 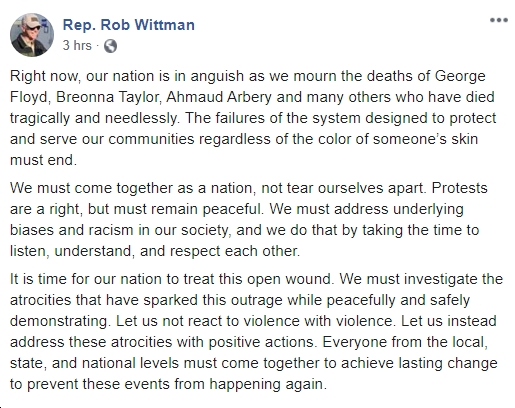 Gazillionaire Glenn Youngkin slightly ahead of @TerryMcAuliffe in fundraising, as of the end of August, with the two candidates debating tonight, and with early voting starting tomorrow https://bluevirginia.us/2021/09/with-early-voting-starting-this-friday-july-1-august-31-virginia-fundraising-numbers-coming-in#comment-5536848778