Among the interesting municipal election results here in Virginia on Tuesday, one that stands out is Staunton, where there were some “big changes”: “With all precincts reporting, conservative candidates Steve Claffey, Andrea Oakes, Mark Robertson and Amy Darby saw wins in the Staunton City Council election,” while incumbents Ophie Kier, Erik Curren and James Harrington all lost their seats.  The result? As the Augusta Free Press reports: “What happened in Staunton? Massive turnout flips Queen City from blue to red”:

“Democrats got their voters out better than they have in a May cycle in years.

Republicans got turnout more akin to, not quite a presidential year, but approaching gubernatorial.

The conservative slates in both cities [Staunton and Waynesboro] ran as a unit and highlighted the Second Amendment as a key issue in their campaigns.

Bottom line is that the strategies worked, flipping both from D to R, but the change in Staunton is stunning almost beyond words.

A city that voted for Barack Obama, twice, voted for Hillary Clinton, voted for Terry McAuliffe and Ralph Northam, even gave a solid majority to Jennifer Lewis in her 2018 congressional run against Ben Cline, is now controlled by Republicans.

I’m rarely shocked by something that happens in politics, but I have to admit, I didn’t see this one happening.”

How “shocked” should we be by Tuesday’s results in Staunton? Here are some election results, going back to 2000, which basically indicate that Staunton was generally “red” in 2000-2004, then went back and forth in 2005-2014, (e.g, voted narrowly for Ed Gillespie over Mark Warner in 2014) with Hillary Clinton narrowly winning the city over Donald Trump in 2016, and then with solid Democratic margins in 2017-2019, with Democrats fired up against Trump across Virginia and the country.

“In response to Tuesday’s elections in Waynesboro and Staunton…Instead of playing the blame game, accept that the Repubs were more organized, more funded and more fired up.”

Better funded, better organized, better motivated? That would tend to do the trick, particularly in a city that’s been pretty much “purple” for years (other than in the post-Trump-elected-president, 2017-2019 period). And no question, Republicans turned out in high numbers for a May municipal election. What was motivating them? As the News Leader reported this past Saturday:

Conversation about a Northern Virginia-based PAC’s involvement in Staunton’s election arose again Thursday after some residents received a second mailer pushing the re-election of Andrea Oakes and the election of Steve Claffey, Amy Darby and Mark Robertson to Staunton City Council.

After the first mailer was delivered in early May, some candidates and residents had questions about the PAC’s involvement in a local election. The 21st Century Virginia PAC’s filing papers indicated that their purpose is to “support candidates in the Shenandoah Valley who support a 21st Century Agenda.”

One side of the mailer compares the positions of Oakes, Claffey, Darby and Robertson with their opponents. Several of the opponents have taken issue with claims made on the mailer.

As you can see below, the mailer in support of the four conservative candidates alluded to “economic disaster,” while basically arguing that the Democrats supposedly supported “rais[ing] taxes,” hurting business, failing to “exercise leadership,” refusing to hold a public hearing on making Staunton a “gun sanctuary,” etc. The usual Republican themes, in other words, but apparently they resonated this time around. 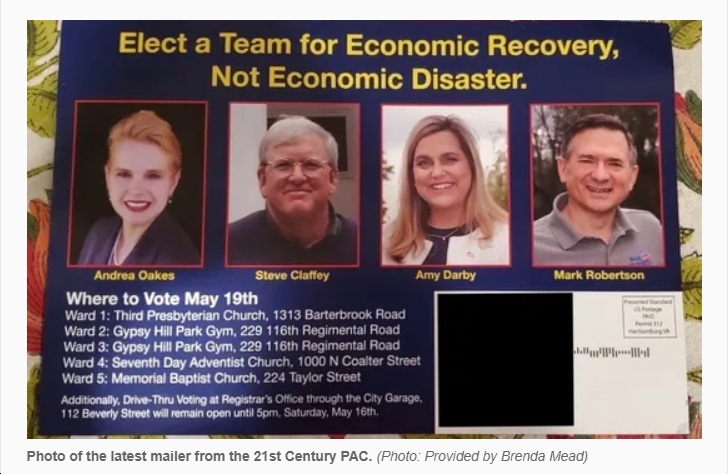 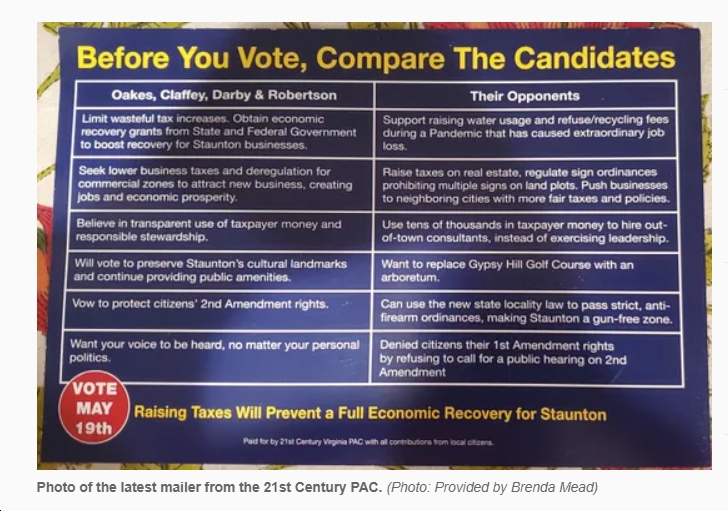 The bottom line question, of course, is how big a deal – or not – was wha happened in Staunton on Tuesday night. Was this just an isolated instance, or does it have any broader political meaning?

I talked to a high-ranking Virginia Democratic elected official this morning, and the person’s thought was that the Staunton results *could be* a “canary in the coal mine” here in Virginia, not so much this November, but quite possibly in November 2021. Historically, of course, we know that when the White House flips party control, we often see a backlash the next year in Virginia against the party that won the presidential election. Clearly, we saw that in 2017, with a massive “blue wave” following Trump being sworn in as president. We also saw it big time in 2009, with Bob McDonnell/Bill Bolling/Ken Cuccinelli annihilating Creigh Deeds/Jody Wagner/Steve Shannon, and with Virginia House Democrats suffering major losses, following Barack Obama replacing George W. Bush in the White House. And in 2001, of course, Mark Warner and Tim Kaine were elected governor and LG, respectively, after George W. Bush replaced Bill Clinton as president. Sensing a pattern here?

So what happens if Joe Biden replaces Donald Trump as president in January 2021? What happens if the economy is a mess in 2021, with Democrats being forced yet *again* to clean up the massive mess they inherited from Republicans?  Will Virginia Democrats go back to “sleep” and/or be demoralized? Will Virginia Republicans be fired up? And, more to the point, will Virginia Republicans be able to run successfully by messaging against the massive, progressive legislative changes passed by a Democratic-controlled Virginia General Assembly in 2020 and, presumably, 2021?  The playbook is predictable – Republicans bashing Democrats as “raising your taxes!” “taking your guns away!” “allowing criminal illegal aliens to run amok!” “ruining the economy!” The question is, will it work?

Personally, I’m not so much worried about the 2021 Virginia governor’s race – and not at all worried about Joe Biden winning Virginia this November. But…I *am* worried about Democrats holding the House of Delegates next year, given the fact that several Virginia House Democratic candidates won only by narrow margins in 2019 (e.g., Josh Cole got 51.8%, Wendy Gooditis 52.3%, Chris Hurst 53.6%, Elizabeth Guzman 52.6%, Dan Helmer 52.3%, Lee Carter 53.3%, Schuyler VanValkenburg 53.3%, Rodney Willett 52.2%, Roslyn Tyler 51.0%, Nancy Guy 50.0%, Alex Askew 51.6%), and given that we’ll have new district lines in either 2021 or 2022. Of course, one could argue that we shouldn’t even worry about November 2021 at this point, because frankly, if we don’t win *this* November, we’re all completely f’ed anyway. But, after all, this is a *Virginia* political blog, and it’s kind of our bread-and-butter to think about this stuff. 😉

Anyway..what do you think? Is Staunton a “canary in the coal mine,” or is it more of a “one-off,” an aberration in the time of COVID-19 craziness and, possibly, with specific local issues and candidates, in a city that’s swung back and forth historically between Democrats and Republicans, playing a major role? Also, is there anything Virginia Democrats can and/or should be doing at this point? What lessons, if any, should we be learning from what happened in Staunton on Tuesday?

P.S. Almost forgot to mention that a Republican, Sang Yi, was the top vote-getter for Fairfax City Council as well. And in Newport News, Republican-backed incumbent Pat Woodbury narrowly held her seat on the City Council.