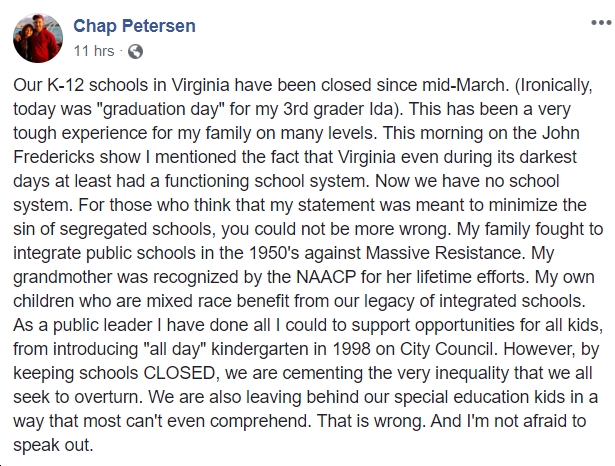 Just when you think Sen. Chap Petersen (D?) can’t top his last crazy move, he…does exactly that. We’ll get to that in a minute, but quick background: this Tuesday, Petersen filed a lawsuit against Gov. Northam, claiming “a continuing violation of the United States and Virginia Constitutions.” That came after Petersen, for months, has been railing against stay-at-home orders, business closures, and other measures to combat the COVID-19 pandemic (which he has repeatedly minimized).

Now, though, Petersen may have topped all that in terms of outrageous, frankly offensive, rhetoric. See below for audio of Petersen’s latest appearance, this morning, on Trumpster Radio (“The John Fredericks Show,” which Petersen has sponsored for years, by the way), in which he had the following to say: