Washington Post: “seat within reach for Democrats in the general election for the first time in more than a decade.”

Bob Good may have woken up yesterday celebrating his rigged convention win, but that’s where his good news ended.

Local and national analysis from Republicans and Democrats alike have universally come to the same conclusion about Bob Good: his homophobic, offensive, and hardline views are out of touch with the district.

Worse yet, his paltry fundraising means Republicans are most certainly going to have to spend huge amounts of money to try and bail him out this November.

All of this spells bad news for Good.

Here’s what folks have to say about the race:

“The defeat of Riggleman, who was endorsed by President Trump, puts the central Virginia seat within reach for Democrats in the general election for the first time in more than a decade.” [Washington Post, 6/14/20]

“Riggleman supporters have said they’re concerned that Good is too conservative and his candidacy could risk the seat flipping blue.” [Roanoke Times, 6/14/20] 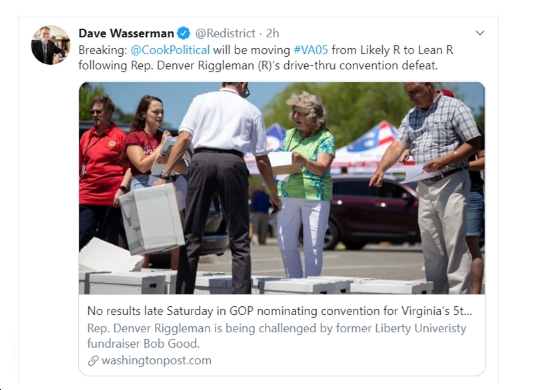 “All of this may end up putting a relatively safe Republican seat in jeopardy in the general election…Several political consultants in the state said they saw that election as a warning shot for Republicans. Choosing the more socially conservative candidate may end being an expensive form of purity: “It will cost the party a lot of money to defend a seat, and possibly lose a seat, that otherwise they’d walk into,” Davis said.” [The Atlantic, 6/14/20]

“Riggleman won the seat in 2018 with 53% of the vote, and Good’s nomination may make the seat a bigger Democratic target in November. The Cook Political Report changed the race from Likely Republican to Leans Republican, following Good’s win.” [NPR, 6/14/20]

“But privately some Republicans fear whoever secures the nomination will need outside help to hold the seat. Good is relatively unknown and will need to introduce himself to the district beyond the several thousand delegates…“national Republicans are going to have to spend money to retain the seat,” said one longtime GOP operative in the state. “And they shouldn’t have to.” [Politico, 6/12/20]