Rep. Denver Riggleman (R-VA05) is in a battle for his political survival right now – one of the most endangered House incumbents, with a challenge from his even more-extreme right wing (by Liberty University’s Bob Good), and with a drive-through VA05 GOP caucus at a church in just 10 days. So maybe that helps explain the following comments.

But then again, Riggleman has been saying and doing inflammatory, idiotic things since he first ran for office in 2018. For instance, check this out, in which he says he doesn’t believe healthcare is a basic human right; that, in the context of an incoherent rant about the climate crisis, he stated that he doesn’t think science should “become a religion” (huh?); he said he opposes net neutrality; and on campus sexual assault, he opined that that “I think a lot of it comes to educating females specifically in the fraternities and sororities.” Ee gads, how do nuts like this get elected?!?

Still, you’d think that maybe, just maybe, Riggleman *might* be able to rise to the occasion of the horrible murder of George Floyd, the explosion of pain and anger around the country, and of course the leader of his own party (Trump)’s appalling rhetoric and behavior.

But…nope, no such luck. Instead, we get the following, drooling idiocy from Riggleman, for which he’s getting rightfully hammered on his own Facebook page. Check it out, as well as the audio (see below) from his WRVA appearance (in which, among other things, he rants about “domestic terrorism” and appears to condone Trump sending in the National Guard without being asked or being given permission by governors) and a few of the top-rated comments from his Facebook page. 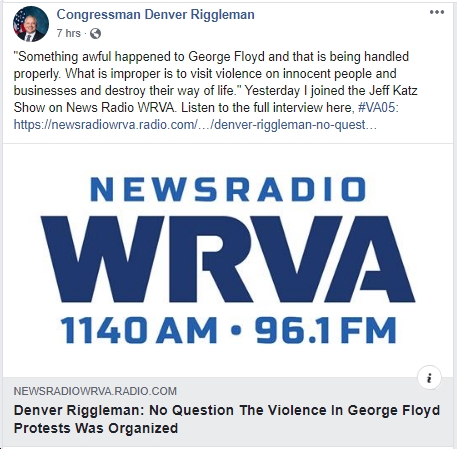