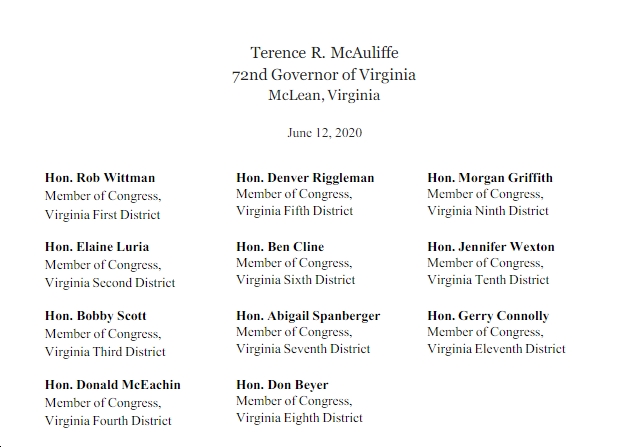 We are going through a much-needed reckoning in our country about how our law enforcement system treats black Americans. For far too long, our leaders have failed to acknowledge that Black Lives Matter. And we are never going to truly move forward as a country unless we acknowledge our history has left behind a legacy of systemic racism that must be addressed. As a very first step, I am writing to ask that you support The Justice in Policing Act. If you are already a cosponsor or planning to support it, please take this letter as gratitude for standing up for what is right.

It is our responsibility as public officials to protect all who call Virginia home. This begins by acknowledging that systemic racism is real, harmful, and a public policy crisis. The use of excessive force against black citizens is not abstract–we have seen it all across our country and, sadly, here in Virginia.

We must do better for victims like George Floyd and Breonna Taylor – and for the next generation.

Saying Black Lives Matter is the bare minimum we can do. The time for a criminal justice revolution is now; one where we prevent police abuse, reduce disparities in enforcement of laws, and hold police officers accountable for their actions. The Justice in Policing Act will reduce police violence and increase transparency in law enforcement. This is not a partisan issue–every Virginian wants police officers who serve to protect, and this bill helps us move in that direction.

I’ve seen the necessary work law enforcement does up close during my time as Governor – and I believe that the majority of police are motivated by a strong desire to protect all of us. But we have also seen how our current system does not do enough to prevent excessive police violence in minority communities. The majority of good officers and the citizens they protect should not have to suffer for the actions of bad officers. This is why greater transparency and accountability for police departments is a step in the right direction nationwide.

To end police brutality and systemic racism in the force, we need reforms to officer training. This bill will ban the use of choke holds, mandate states use federal funding to increase police body cameras and dashboard cameras, increases training on racial discrimination, and reform the accountability process for police officers who commit misconduct. If an officer does abuse their power and force, Americans should be able to hold them accountable. Ultimately, this means nothing if the Department of Justice continues to drag their feet on pattern and practice investigations. This bill improves the use of those investigations so they mean something again.

We have a moral responsibility to make sure every Virginian is protected by the law. Americans are being killed, families are being broken up, and pain is being inflicted in our black communities. We know the cause and we know some actions we can take to prevent more deaths. The Justice in Policing Act is just a start – but it’s a very important step you can take right now as our elected representative.