“I have long been committed to protecting and supporting victims of sexual assault, domestic violence, and human trafficking in Virginia,” said Speaker of the House Eileen Filler-Corn. “I am proud that laws passed during the 2020 General Assembly session will provide significant aid to victims of these unfathomable crimes. While we have indeed made great progress, we continue our fight to support these brave Virginians and stop these crimes from happening in our Commonwealth.”

Protective measures include prohibiting persons subject to protective orders from possessing firearms, requiring colleges and universities to grant disciplinary immunity from self-disclosed alcohol and drug violations for victims and bystanders who report sexual assaults, informing localities and local immigration organizations of human trafficking risks to which immigrants may be more vulnerable, and adding coaches and adults involved with public sports programs to the list of mandatory reporters for suspected child abuse and neglect.

“Our legal code should offer a clearer path of justice for victims of heinous crimes involving sexual assault, violence, and exploitation,” said House Democratic Majority Leader Charniele Herring, who served as the patron for HB 1006 which changes guidelines for questioning minors who may be victims of human trafficking. “I am proud of how House Democrats used the majority to stand up for Virginians who have suffered unspeakable pain, while also trying to prevent new tragedies from happening — especially ones that involve children.”

House Democrats also used the 2020 historic legislative session, where they held the majority for the first time in more than 20 years, to complete the ratification process for the Equal Rights Amendment (ERA). Earlier this year, eight female House Democrats advocated for the ERA in a Washington Post op-ed, stating that a “constitutional prohibition barring sex discrimination will provide additional impetus for police departments and prosecutors to test kits promptly, as continued failure to pursue evidence could be litigated as systemic sex discrimination because the vast majority of reported assaults are committed against women.”

In addition, House Democrats successfully enacted new protections for women, racial minorities, and the LGBTQ+ community, especially in the arena of discrimination and hate crimes, which also go into effect on July 1.

“We must look to address physical and sexual violence as we look for ways to create positive, sweeping change in the Commonwealth,” said House Democratic Caucus Chair Rip Sullivan. “House Democrats focused this session on looking out for Virginians who have routinely been overlooked legislatively by past General Assemblies. These bills are a product of that mission — they aim to help victims find justice, receive emotional, physical, and mental support, and be able to speak up for themselves.”

Here is the summary of the major legislation from House Democrats dealing with victims’ rights, which go into effect on July 1: 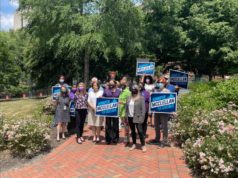