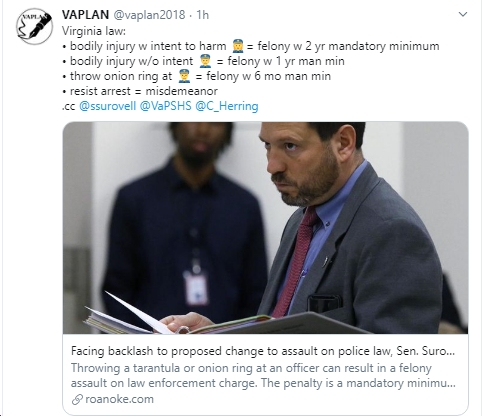 The following is from State Sen. Dave Marsden (D). Also, check out Facing backlash to proposed change to assault on police law, Sen. Surovell explains how it’s been ‘abused’ (“Throwing a tarantula or onion ring at an officer can result in a felony assault on law enforcement charge. The penalty is a mandatory minimum of six months in jail. Sen. Scott Surovell, D-Fairfax, wants to change the law, which he said is ‘abused.'”).

In the 70s and 80s we created laws to overcharge many offenses in the belief that it would reduce crime. That was not the case. Most assaults on police officers occur during an arrest when they already might face resisting arrest charges — which is a Class 1 misdemeanor. An additional charge of assault would lead to a potential two-year sentence — which is the starting point for a Class 6 felony.

We have dozens and dozens of cases of individuals who were overcharged for minimally assaultive behavior. For instance, a woman who instinctively slapped away an officer’s hand during a handcuffing procedure was charged with a felony. A man who pointed a laser pointer at an officer from 100 feet away was convicted of a felony. A police officer who was being followed by a protestor abruptly stopped to cause the protestor to run into him — which the officer charged as a felony. The list goes on and on.

People are rarely sentenced to more than a year on these felonies. They are mostly unplanned and do not involve a weapon. If they involve a weapon, that can be an entirely new charge and could lead to a malicious wounding charge — which is a more serious offense.Felonies destroy lives. While certainly felonious behavior should follow some individuals for their entire lives, for many who commit a felony in the heat of emotion, it becomes a lifetime sentence to underemployment, poverty, and inability to vote. This costs taxpayers a considerable share of public resources to help the children and families of these individuals — not to mention the cost of their incarceration.

There will always be instances of resisting arrests and assaults on police officers. This can lead to a two year sentence — which is the start of the 2-6 sentencing potential of a Class 6 felony.

Creating felonies has been what people call “brochure bills” that legislators have been filling for years. It is a means of getting re-elected as a “tough on crime” legislator rather than a science-based approach to sentencing and it costs all of us a fortune. We have to stop creating these ill-conceived laws and do what we now know reduces crime, dysfunction, social and financial costs.

Democrats in the Virginia Senate are taking a lead in questioning the political expediency of the past. There is no disrespect meant to police officers. Having been involved in juvenile corrections for 50 years, I understand the stress and hazards of being a police officer. Trust me, the people most affected by these policies are the minority citizens of Virginia.