Last night, Laura Ingraham – yes, the person who strongly supports Trump; who “has said that her influences include Ronald Reagan, Robert Bork and Pat Buchanan”; who ” has spoken out against the changing racial demographics of The United States”; and who “likened detention facilities where children separated from their illegal immigrant parents by the Trump administration are kept to ‘summer camps’ that ‘resemble boarding schools'” – went after the Fairfax County School Board. Check out the video (“Reading, writing and radicalism”), below, including comments such as:

So yeah, obviously Laura Ingraham’s whole shtick is to stir up outrage against liberals, progressives, the “left” (broadly defined), “political correctness,” etc. But is anything she says actually in touch with reality? As Fairfax County School Board member Laura Jane Cohen’s former campaign manager posts publicly on Facebook (bolding added by me for emphasis):

I’m so mad, I don’t even know where to begin.

Fox News is just straight up lying and folks are gobbling it up without an ounce of critical thinking (which is not to say other networks/hosts don’t do the same, but never to the degree of this network). Beyond the blatant lies being spread from the Secretary of Education on down through Laura Ingraham, Ingraham is also maligning and belittling school board members in FCPS (some of whom I count as friends). They have worked 14, 16, 18+ hour days since the pandemic started to try and make sure students, staff & faculty, and their families are as safe as possible given the absolute disregard for human life the Executive Branch has shown through this pandemic.

Disagree with policy decisions all you want, that’s fair game, but to call a school board member (who is incredibly brilliant) dumber than a stuffed doll is disgusting. I can’t imagine, for a second, hearing rhetoric like that come from a news anchor and not once applying critical thinking to say “maybe she’s wrong”.

All this is to say that voters in November elected the current school board members with a mandate to work for the safety and security of all those in the FCPS system, and they’re doing just that. Despite what Betsy DeVos or Laura Ingraham say, the school board members are working incredibly hard to make an impossible situation even slightly more manageable for students, staff, and their families. You may not agree with every choice they make, but you have to trust they’re working in the best interest of the FCPS community.

Take the time to get to know them and reach out to them if you disagree with a choice or to provide input, but do not resort to infantile criticisms.

TLDR; Fox News is by and large entertainment and not fact-based journalism. Use critical thinking skills when watching *any* news report or reading *any* news article. 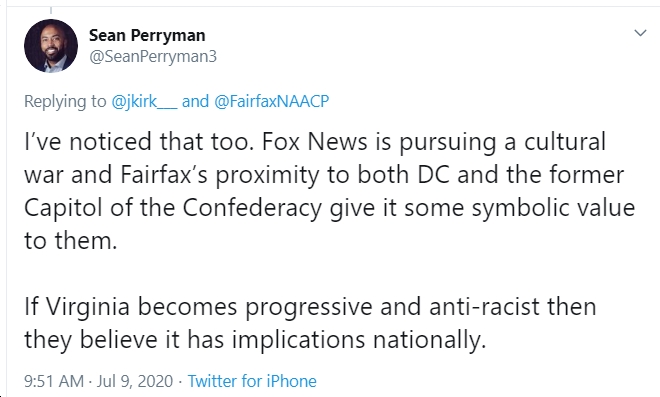