See below for statements on the loss of Rep. John Lewis, one of the greatest leaders in our nation’s history, someone who – as Sen. Mark Warner said – “dedicated his life to the betterment of this country,” and – as Sen. Tim Kaine said – “Congressman Lewis’s moral courage transformed this country. May it live on.” 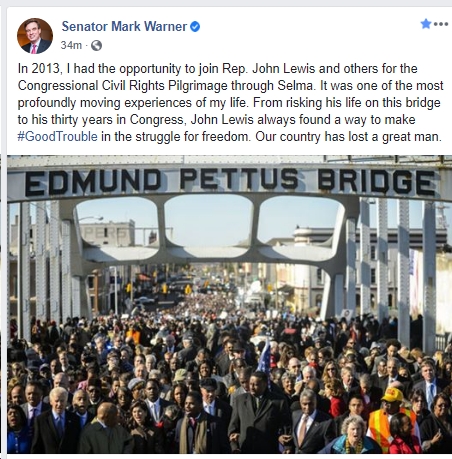 Rep. John Lewis was a fighter, a leader, and an American hero. He dedicated his life to the betterment of this country. I hope his example will be an inspiration for the next generation. May he rest in peace. https://t.co/a2lFyXGksq

For his freedom ride at age 21, John Lewis was taunted, beaten, and arrested. Asked why he persisted, he explained, “Every generation leaves behind a legacy… What legacy do you want to leave behind?” Congressman Lewis’s moral courage transformed this country. May it live on.

This is a horrible loss for the nation. Words do not seem to properly convey the loss. Serving with him in Congress has been an honor, and we will all miss him and his moral leadership at this time. https://t.co/8VEwuDwpTV

America has lost a man of conscience who called us all to join the struggle for racial justice. John Lewis brought a fierceness to the good trouble he never ceased engaging in: to turn hearts, to model courage to speak truth to power. His legacy is our moral lodestar to continue.

As we celebrate a life well lived–a life dedicated to causing ‘good trouble,’ we must step up and continue that legacy. To say it has been a privilege to serve in Congress with this American icon would be an understatement. We are forever indebted to John Lewis as a nation. pic.twitter.com/WvhPklEIPQ

When the Supreme Court struck down the core of the Voting Rights Act because some believe the need for it has passed, John Lewis said “come walk a mile in my shoes.”

He meant it. Each year he showed any Member of Congress who made the trip key sites of the Civil Rights Movement. pic.twitter.com/b0g6QX4DX2 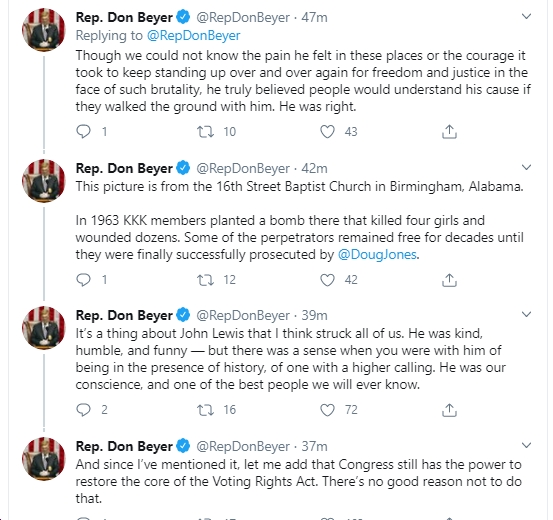 An American hero who lived a life of “good trouble.”

Honoring a true hero, legend, & giant tonight. One who showed us how to press for meaningful change, even when we know that it comes at a cost. Thanks for making your life our example & encouraging us to make #goodtrouble. Rest easy, @RepJohnLewis—we promise to carry it forward. pic.twitter.com/g09H4fe8g3

John Lewis capturing beautifully how lawyers advance the fight for civil rights. It’s why I became a human rights lawyer.

We must never relent in our fight for justice for all