See below for some thoughts – by Virginia Speaker Eileen Filler-Corn, Sen. Tim Kaine and Charlottesville City Council member Lloyd Snook – on the 3-year anniversary of the white supremacists/neo-Nazis’ marches and violence – including the assault on DeAndre Harris  (“by six men in an attack in a parking garage next to the police headquarters during the Unite the Right rally”) and the murder of Heather Heyer – in Charlottesville. Also, let’s never forget that Donald Trump claimed, laughably, that there were “very fine people on both sides.” That’s right, Trump thinks that white supremacists and neo-Nazis can be “very fine people,” equivalent to those who oppose white supremacy, such as Heather Heyer.  That’s how this guy’s f’ed-up mind works, sad to say. Fortunately, on November 3, we can boot this bigot’s butt out of office, preferably by an overwhelming landslide, and replace him with Joe Biden and Kamala Harris – the antitheses of Trump in so many ways.

3 years ago, violence descended upon Charlottesville bringing terror and hate to our Commonwealth. Virginia history is complicated and often dark and painful, but the false ideology of white supremacy has no place in our Commonwealth’s future.‬

Many brave Virginians stood up to this disgusting rally rooted in racism – they stood up for diversity, for tolerance, for inclusivity. And, this year, we achieved historic progress fighting hate & making Virginia safer, but it was just the start. There is still much work to be done.‬

August 11, 2017, felt like the day before a hurricane was expected to hit. We knew that the Unite the Right Rally was going to happen the next day, and we were all just waiting to see what that would mean.

I was on the Vestry of St. Paul’s Memorial Church on the Corner, across the street from the Rotunda. We would be hosting a counter-rally at 8 PM that night. Dr. Cornel West would be speaking, and some other national faith leaders were also going to be speaking about the historic nature of both the Saturday rally and the need for us to bear peaceful witness against hate. We were not expecting any trouble — we were gathering in peace.

The first indication that something more was afoot came at 11:30 am, when we at the Church got an e-mail from the CPD that the off-duty officers that we had arranged for as security would not be available, as CPD had intelligence that they would need all hands on deck to deal with an unspecified threat that was expected to result in an Alt-Right activity at the Rotunda that night, right across the street from us. They told us not to worry about not having the off-duty officers, because there would be a large police presence on University Avenue, between them and us.

We didn’t know what that really meant, but it felt as though the expected hurricane had just been upgraded to a Category 3 storm.

I had a federal court sentencing that afternoon, and I couldn’t understand why the courtroom was packed for my little hearing. Only after the hearing did I understand that the case AFTER mine was the case where Judge Conrad was going to rule on the question of whether the City could force the Rally out to McIntire Park. As I walked back to my office after the hearing, I learned that the Alt-Right folks had been buying all of the tiki torches at the Wal-Mart on US 29 north of town. Again, we weren’t sure what that meant, but it felt like the hurricane had just been upgraded to a Category 4 storm.

That evening, I was an usher at the church service at St. Paul’s from 8-9:30 pm. The service had been scheduled for weeks. Cornel West would be speaking. It was seen as the kickoff for the anti-Unite-the-Right efforts. It would be followed by a sunrise service at 6 AM the following morning, and a march to McGuffey Park and Market Street to confront the Alt-Right people coming to what was then called Emancipation Park. We didn’t have the off-duty officers, but there was a group of funky-looking guys with walkie-talkies who were our security service. At about 8:15, we were told that there were at least two Alt-Righters in the congregation, tweeting out information about what was happening. We weren’t sure what that meant, but at about 8:30 about 20 CPD officers brought their cars to University Avenue, and set themselves up between the Church and the Rotunda. By that time hundreds of tiki-torch-bearing marchers were gathering. At about 9:15 the tiki-torch marchers had gathered around the statute of Thomas Jefferson in front of the Rotunda. From the church we could see the lights, but we couldn’t really see what was happening, but the security guys told us that we needed to keep singing hymns — we couldn’t let anyone out of the church, at least not headed toward University Avenue. I was at the Chancellor Street side door; we could let out a few at a time provided that we got a signal from the security guy in front of the church that it was safe to do do. We couldn’t see anything, but the feeling of danger was palpable. Mothers were trying to be reassuring, but it wasn’t working; children were crying in fear. By about 10:15 the coast was clear, and we could let people go home.

The storm had been upgraded to Category 5.

“Three years ago, white-nationalists invaded the Commonwealth and rioted against people of color, Jewish people, our allies, and our steady march towards equality. We continue to mourn the losses of Heather Heyer, Lt. Jay Cullen, and Trooper-Pilot Berke Bates. Since that time, we’ve witnessed countless acts of violence against people of color, including the recent murders of Breonna Taylor, George Floyd, Ahumad Aubrey, and so many more.

“Systemic racism, discrimination, and oppression have existed in this country since before its founding, and frustration with the staus quo has bubbled over and spilled into our streets once again. As a Black VMI graduate who was trained to defend our country’s core values and then went on to serve as a magistrate judicial officer, public defender, and a member of the House of Delegates in the former capital of the Confederacy, I feel the pain of what happened in Charlottesville three years ago very deeply.

“Today, in honor of those lost to senseless violence fueled by systemic racism, we all must pledge to do better. We must all do our part to further our values of equality and inclusion, and fight back against injustice wherever we see it.” 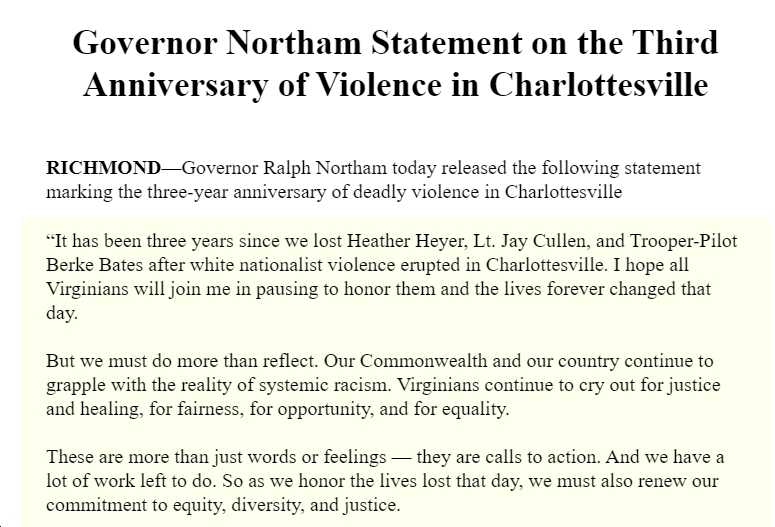 “Three years ago our beloved Commonwealth became the scene of some of the ugliest public acts of hatred and racist violence in recent American history.

“The horror of that weekend and the wounds which still remain are part of the larger story of racism in the United States. Like recent acts of police brutality and racist murder, the echoes of Charlottesville still cry out for justice, healing, peace, and reform.

“My thoughts today particularly go out to the family of Heather Heyer. Earlier this year, the House of Representatives passed my legislation named after Heather, and Khalid Jabara, to strengthen and coordinate the national response to hate-fueled violence. I continue to urge the advancement of this vital legislation in the Senate.”

Rep. Beyer is the author of the bipartisan, bicameral NO HATE Act. 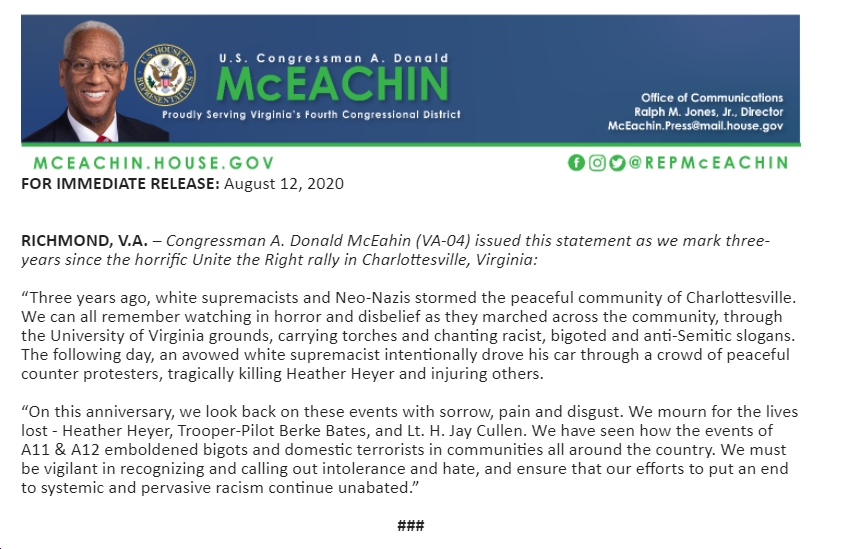