They’re wrong about pretty much everything and – for good reason – not in charge, but for the record, see below for the Virginia House Republicans’ comments earlier this afternoon on the upcoming Special Session of the Virginia General Assembly. And thanks for reporter Brandon Jarvis for the live Tweeting of the event (see below).  As you watch the video, the speakers are, in order: 1) Virginia House Republican Leader Del. Todd Gilbert; 2) Virginia House Caucus Chair Del. Kathy Byron; 3) Del. Rob Bell; 4) former Speaker Kirk Cox. Also, as you watch, keep in mind that these people haven’t won a statewide election since 2009, and that their wrong-headed, right-wing, backward, reactionary positions on issue after issue are a big part of the reason why.

One common theme by VA House Republicans, for instance, is that Democrats are wrongly going after the police – the vast majority of whom they argue are “good guys” – and not the “bad guys,” and that these proposals are all “non-starters” for the VA House GOP caucus. In fact, Virginia House Democrats favor commonsense things like “Banning the use of chokeholds and other lethal restraints used by law enforcement”; “Demilitarizing police departments by prohibiting the acquisition and use of certain weapons by law enforcement agencies”; “Strengthening laws related to Citizen Review Panels” and “Banning sexual relations between officers and arrestees.” Republicans apparently oppose all of those proposals.

As they’ve said repeatedly, Republicans also kids back in school, despite the COVID-19 pandemic and the clear danger this poses to kids, to teachers and school staff, and to the parents/grandparents/etc. of students. Utterly ignorant and irresponsible, as well as widely unpopular, if you look at any of the polling on this issue.

In general, Republicans falsely claim that Democrats have been pulled to the “extreme” “left” on the issues, which of course is objectively false if you look at any of the polling on issue after issue. Republicans argue that Gov. Northam’s executive authority has been overused in the COVID-19 crisis, even though Northam’s been going pretty much what every other governor – Democrat and Republican – has been doing, and even though Trump’s abuse of executive powers doesn’t elicit a peep of protest from these same Republicans.

You’ve also got to love the Republicans’ argument our criminal justice system “locks up the right people” and that we shouldn’t let them out of jail, even though clearly that system incarcerates many, many people for non-violent offenses such as drug possession, and disproportionately incarcerates people of color.  On a related note, Republicans falsely claim that Democrats want to “defund the police” – as opposed to reforming and/or reimagining aspects of policing. They laughably claim that Democrats supposedly want to “reward rioters”; blah blah blah. It’s a bunch of steaming drivel, in other words, but get used to it, as we’re going to be hearing this endlessly the next few weeks and in the 2021 Virginia elections. 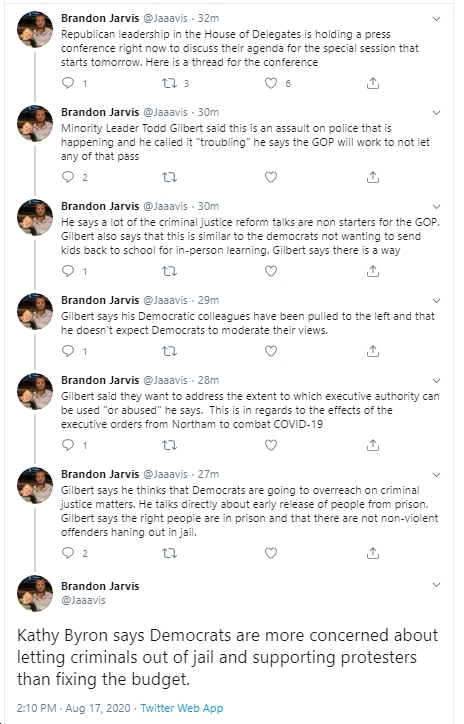 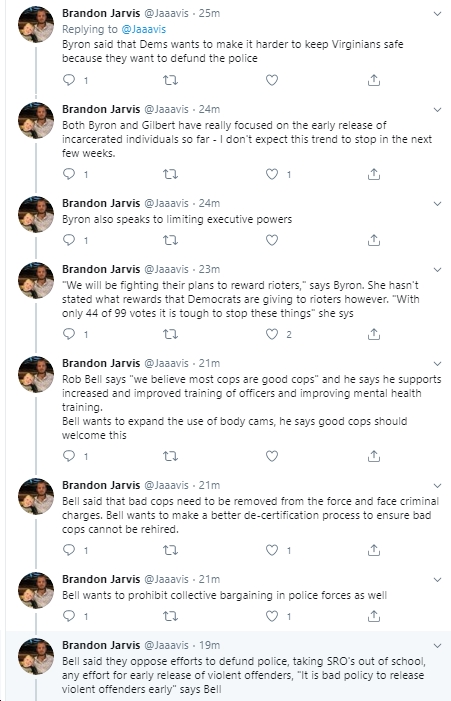 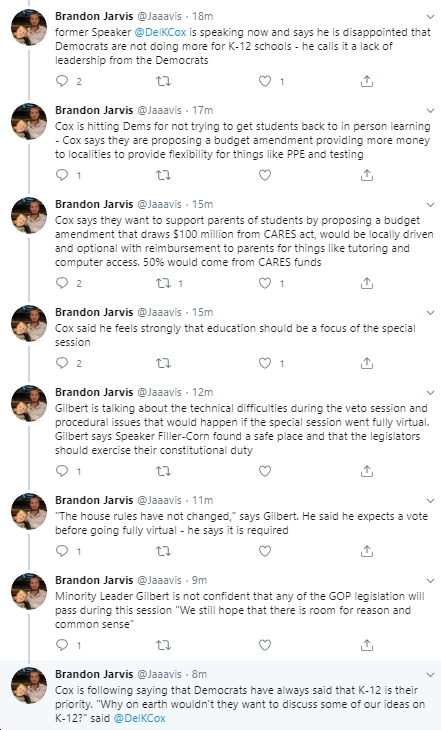