See below for reactions to this appalling, outrageous story, including from Senators Mark Warner and Tim Kaine, who say they are “horrified by the administration’s actions,” so “will be demanding more answers from DHS and ICE today and will also request an investigation from the Office of the Inspector General in light of this incident.” Also, Virginia State Sen. Jennifer Boysko – who has a bill that would make it so that the term “local correctional facility…include any facility owned, maintained, or operated by any political subdivision or combination of political subdivisions of the Commonwealth that is used for the detention or incarceration of people pursuant to a third-party contract with the federal government or any agency thereof” – writes: “Farmville, Va., covid outbreak linked to ICE flights bringing agents to protests – The Washington Post. Disgusting! I have a bill that will hold this facility accountable SB5017. We must have access!” For some video of the debate yesterday in the State Senate, in which Sen. Dave Marsden argued against Sen. Boysko’s bill, while Sen. Barbara Favola argues in support of it, see here and at the bottom of this post. Clearly, one way or the other, with so many “questions regarding the measures in place to safeguard the health of people in custody, staff members, and the community” at Farmville, a lot more oversight is required…certainly as long as Trump’s in office!

The Trump administration flew immigrant detainees to Virginia this summer to facilitate the rapid deployment of Homeland Security tactical teams to quell protests in Washington, circumventing restrictions on the use of charter flights for employee travel, according to a current and a former U.S. official.

After the transfer, dozens of the new arrivals tested positive for the novel coronavirus, fueling an outbreak at the Farmville, Va., immigration jail that infected more than 300 inmates, one of whom died.

U.S. Immigration and Customs Enforcement said the agency moved the detainees on “ICE Air” charter flights to avoid overcrowding at detention facilities in Arizona and Florida, a precaution they said was taken because of the pandemic.

But a Department of Homeland Security official with direct knowledge of the operation, and a former ICE official who learned about it from other personnel, said the primary reason for the June 2 transfers was to skirt rules that bar ICE employees from traveling on the charter flights unless detainees are also aboard. 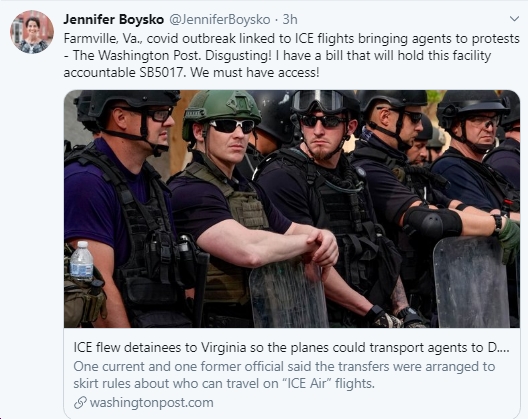 “We are outraged by the recent news report. The transfers callously put federal employees, the Farmville community, and detainees at risk, in what appears to be an effort to add more federal agents to forcibly disperse peaceful protestors in Washington, D.C. this summer. For months, we have sounded the alarm about the dangers of transferring detained people between facilities during the pandemic, and we’re horrified by the administration’s actions. We will be demanding more answers from DHS and ICE today and will also request an investigation from the Office of the Inspector General in light of this incident.”

Sens. Warner and Kaine have repeatedly pushed this Administration to prevent and mitigate the spread of COVID-19 in Virginia detention facilities. In June, after a transfer that resulted in a spike of more than 50 COVID-19 cases at Farmville, the Senators urged the Department of Homeland Security (DHS) to prioritize the health of detainees and workers by stopping the transfer of individuals in ICE custody and increasing COVID-19 testing at the facilities. Nearly a month later, with approximately 80 percent of the Farmville population testing positive for COVID-19, the Senators once again pressed ICE and DHS to stop transfers between facilities. They also posed a series of questions regarding the measures in place to safeguard the health of people in custody, staff members, and the community. In July, the Senators also insisted that the Trump Administration work with the Centers for Disease Control and Prevention (CDC) to create and deploy teams of epidemiologists to conduct an assessment of the pandemic’s impact at the facility after nearly every detained person in the Farmville facility contracted COVID-19. At the Senators urging, the CDC deployed their teams to the Farmville facility in August to conduct an assessment of the rate of infection among workers and detainees, risk factors for infection among workers and detainees, infection control and prevention practices in the facility, and transmission dynamics among workers, detainees, and the surrounding community.