Last Friday, Virginians started voting early for the November 3 election, and they’re doing so enthusiastically so far, particularly in “blue,” Northern Virginia jurisdictions such as VA8, VA11 and VA10. Overall, as of yesterday (9/24), according to the State Board of Elections,  Virginia had seen 164,130 people vote in person and 44,246 by mail. So that’s the *good* news.

The *bad* news is that, in Fairfax County, Virginia’s by-far largest jurisdiction (1.2 million people; over 750k voters), there have been long lines – see here, for instance – every day since early voting started, at the one early voting location open in this huge county – the Fairfax County Government Center. And even there, you can only vote Monday-Friday, as for whatever reason(s) it’s not open on Saturdays – other than last Saturday – until October 17 As economists might say, there’s a massive imbalance in Fairfax County between the enormous “demand” of people to vote early/in-person on the one hand, and a minimal “supply” of places (just the Fairfax County Government Center, Monday-Friday, at this point) to do so. The result: lines to vote early/in-person in Fairfax County have averaged between one and two hours since last Friday, with the wait to vote at times reaching four hours or even more! That’s not cool at all.

Also note, by the way, that Fairfax County is huge in terms of area – 406 square miles – so that having only one place open for everyone in the county to vote, whether they live in the far south, far west, far north, etc. of the county, means that voters often have to drive many miles (as much as 30 miles or more round-trip), possibly through notorious Northern Virginia traffic, to get to the Fairfax County Government Center in the first place, even before waiting hours to vote. So basically, budget a good chunk of your day if you want to vote early/in-person in Fairfax County right now. Ugh. And, unfortunately, that situation won’t get any better until October 14th, when “satellite” voting locations finally open all over this gigantic county.

Contrast that with neighboring Prince William County, which already has three vote centers open – in three different geographical parts of the county – making it a LOT easier for people in that county to vote than in Fairfax County. 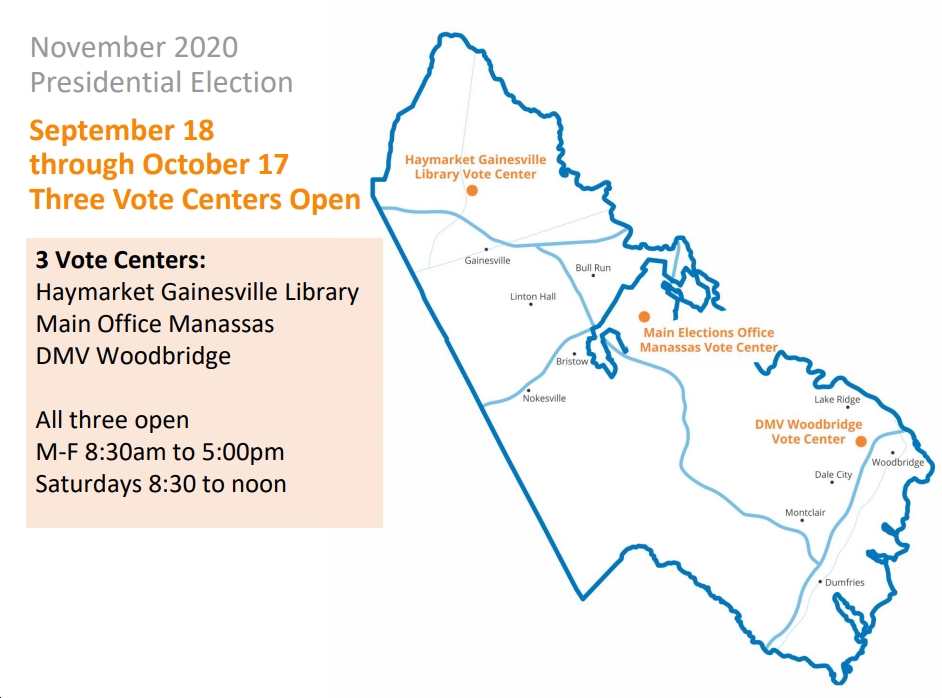 Also, contrast to Arlington County, where my wife and I voted earlier this week with no wait whatsoever, and with a 5-minute drive to and back from the voting location. Now, again, Arlington County is very compact, but still, it shouldn’t be *that* easy to vote in Arlington and *that* hard to vote in neighboring Fairfax County.

The result of making it so difficult for people to vote early/in-person in Fairfax County means, not surprisingly, that despite Fairfax County being much larger than neighboring jurisdictions (PW County is about 470k; Arlington County about 240k), through Wednesday nearly twice as many people had voted in PW County than in Fairfax. And this is the case despite PW County being just about 40% of Fairfax County’s population, as Chris Ambrose explains below. 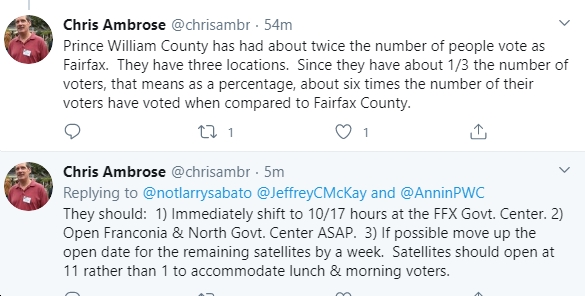 I agree 100% with Chris Ambrose, by the way, that at the minimum, Fairfax County should “shift to 10/17 hours at the FFX Govt. Center”; “Open Franconia & North Govt. ASAP”; and “if possible move up the open date for the remaining satellites by a week.” Also, of course, get drop boxes out there ASAP, and in general do anything/everything possible to make it as convenient as possible for people to vote – and vote *as early as possible* – during this absolutely critical election. And no, pinching pennies on something *this* important isn’t acceptable.

As for what Ben Tribbett tweeted (see below), I have no idea if Chairman Jeff McKay and/or the Board of Supervisors “refused to fund other locations until later in October,” but regardless of whose fault it is, this situation needs to be rectified ASAP. And clearly, it shouldn’t be acceptable for there to be – as Tribbett explains – an early voting location open for every 100,000-150,000 voters in Arlington, Alexandria and PW County, but only one voting location for 800,000 (!) voters in Fairfax County. As you can see below, the result is yet *another* long line today of people waiting to vote at the Fairfax County Government Center. Sorry, but that’s just not acceptable – please fix this problem immediately; our democracy is at stake, so throw whatever resources at this as needed, no excuses accepted. 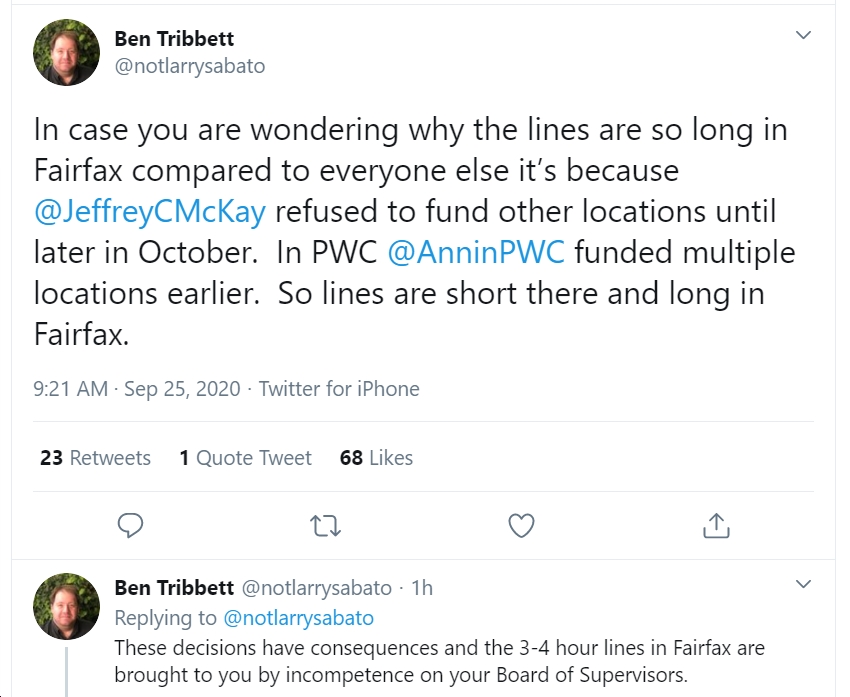 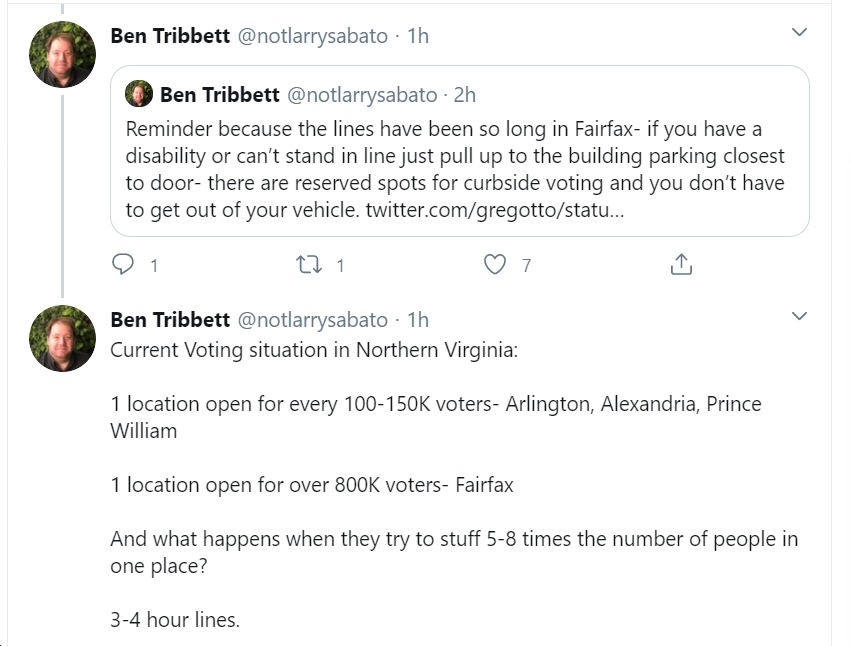 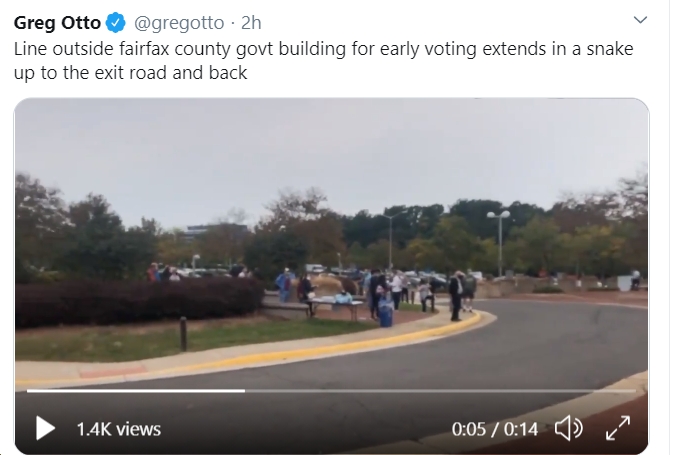