With that, here’s a press release from Karishma Mehta, who describes herself as a “Preschool teacher, community organizer & daughter of immigrants seeking to fully represent the people of Virginia’s 49th House District.” On the issues, Mehta’s running very much to the “left,” for instance:

For his part, Del. Alfonso Lopez – first elected in 2011 and now Majority Whip – is considered the 13th-most-progressive member of the Virginia House of Delegates, according to the VAPLAN 2020 scorecard. (Lopez had the highest progressive score in the 2018 scorecard and the fifth-most-progressive score in the 2019 scorecard). In 2019, Lopez was primaried, with Lopez winning the nomination 77%-23%. After Democrats won back the House of Delegates in November 2019, Lopez became Majority Whip, helping to guide a massive amount of progressive legislation – on pretty much every area – through what was an historic General Assembly session, almost any way one looks at it. The bottom line, IMHO, is that Del. Lopez – who (full disclosure) I have known for years and consider a friend – deserves a lot of credit for that, and should be evaluated accordingly (e.g., favorably). But clearly, a primary challenge will put the question out there to 49th District voters as to whether they agree with that assessment or not. Also, a primary will test how “left”/progressive this district wants to go – are they mostly happy with where they are now or want to move even further in a progressive direction? Anyway, stay tuned…assuming our democracy makes it past November 3rd in one piece, of course. 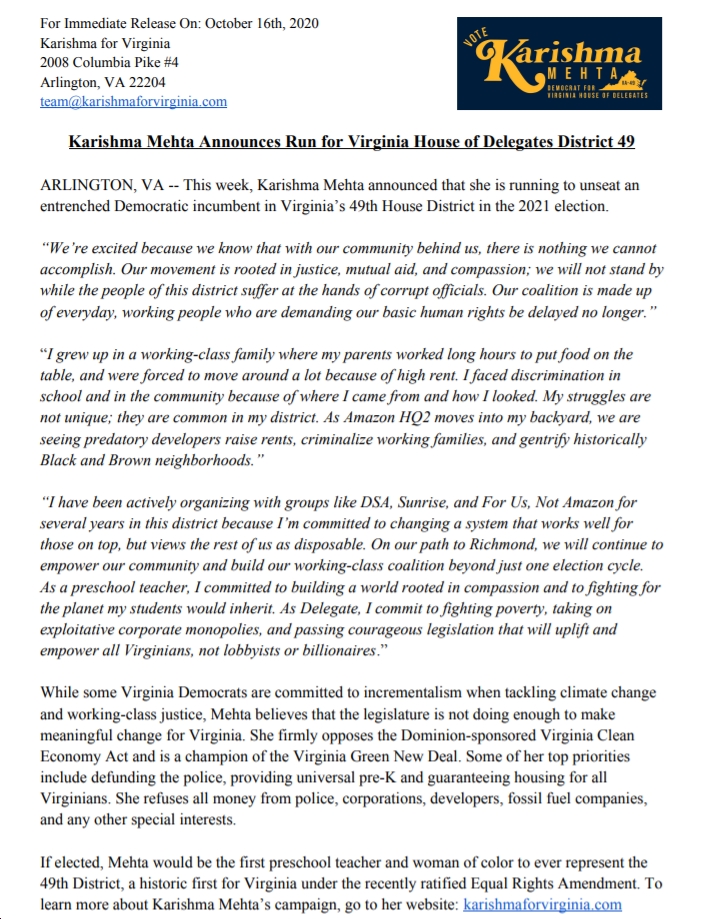