Not that long ago, Virginia was one of the worst states in the nation in terms of voting access. Just two years ago, just before the 2018 election, a study rated Virginia as the second most difficult state to vote in. Why?

Some of the factors in the Commonwealth’s previous low ranking used to include:

“We find that states that have more difficult or more costly voting policies, fewer individuals actually show up to vote,” Pomante relayed.

Elections do have consequences, though, and, with Democratic Party control of the legislature and the Governor’s mansion as of January 2020, two of these are, in essence, simply no longer true.  While voters still need to be registered three weeks ahead of time (by Oct 13 — ACTION ITEM: REGISTER NOW!!!!) and the Commonwealth still requires Voter ID (even though there is far more relationship of this with voter suppression, especially of less-affluent portions of the citizenry; here’s a list of acceptable forms of ID, including a driver’s license, valid student ID, current utility bill or bank statement, etc.), Virginians can now vote early and don’t have to have a reason (especially important in times of COVID) for absentee ballots and/or early voting.  Clearly, while far from perfect in terms of voter access (and likely to again have longer lines in communities of color than in affluent, mainly white communities, on election day), Virginia is not any longer the second-worst state in terms of voter access. And, we can see this in what is happening. 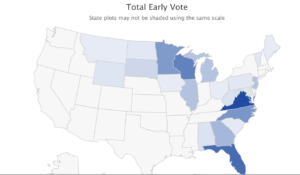 Virginia is leading the nation in early voting. According to the Early Voting Project, with over 618,751 votes so far, Virginia has the highest number of votes (early voting and/or returned absentee ballots) of any state in the nation so far. 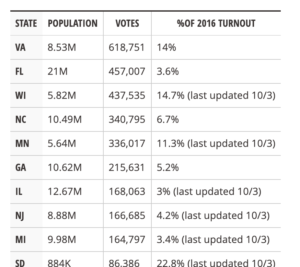 At 14%, Virginia also is among the highest in terms of percent of 2016 turnout. By the way, that figure could be highly misleading, since we could well see significantly higher total voting this year. Will most states be well above 100% of 2016 turnout?

And, of course, this is occurring despite Trump efforts to depress turnout and attack absentee balloting. And, despite Trump’s followers living out his calls to intimidate and inhibit voting as seen at the Fairfax government center the first day of early voting.

Let’s be clear: Virginia is doing better in terms of voter access. The Democratic members of the legislature and Governor Northam deserve recognition for their measures to improve voting access in the Commonwealth (even as per voter ID requirements & same-day registration, however, more remains to be done).  And, as per the numbers recorded above, Virginians are taking advantage of the improved voting rules to get out and vote early and by mail.

P.S. There are numerous substantive reasons to vote NO on Amendment 1.  To put it simply, Amendment 1 is not something that will improve Virginia elections. 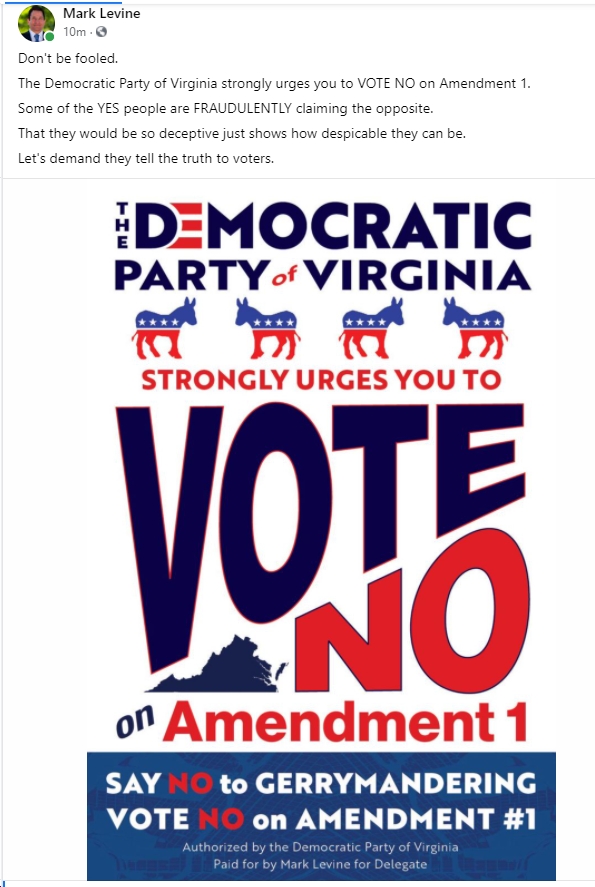