What is it with Donald Trump and doctors? Remember Dr. Harold Bornstein?

In December 2015 in response to questions about his health, Trump asked Bornstein to issue a “full medical report”, predicting that it would show “perfection”.[11] Two days later Bornstein signed a letter full of superlatives, saying that Trump’s “laboratory results are astonishingly excellent” and that Trump “will be the healthiest individual ever elected to the presidency.”[12] In August 2016, Bornstein stated that he had written the letter in five minutes while Trump’s limousine waited for it. But he reiterated that Trump’s “health is excellent, especially his mental health.”[13]

Or how about Dr. Ronny Jackson, who said of Trump in January 2018:

“People have just great genes. I told the president that if he had a healthier diet over the last 20 years, he might live to be 200 years old…[Trump] has absolutely no cognitive or mental issues whatsoever.”

Riiiiight, because doctors always talk like this about their patients, referencing “great genes,” claiming they could live to 200 years old, etc. I mean, seriously, only the best and most ethical doctors for Trump? Ee gads.

Most recently, we all watched the spectacle, after Trump came down with COVID-19 at the end of September/beginning of October, of Trump’s doctor, Sean Conley, acting more like Trump’s public relations agent (and not a very good one at that!) than as a serious physician. Check it out:

“For the past several days, President Donald Trump has had COVID-19. It’s unclear for how many days, because the president’s physician, Sean Conley, refuses to share that information. When asked again yesterday, Conley told reporters, ‘I don’t want to move backwards.’ In fact, Conley has shared very little about the course of the president’s illness. On Friday, the same day Trump informed Americans that he had tested positive, he was taken to the hospital ‘out of an abundance of caution,’ according to his press secretary. By the next morning, the narrative had shifted. Conley said that Trump was ‘doing much better,’ but relative to what, exactly? Then, on Monday, Conley told reporters that the president was to be discharged to the White House. ‘He’s back,’ Conley said with a smile…

…Conley has served as Trump’s publicist in a white coat, reassuring Americans at every turn that Trump is doing well, while leaving out conspicuous details. His vaguery and obfuscation have repeatedly undermined these reassurances. His ethical obligation to his patient is in direct conflict with the basic moral imperative not to lie, by omission or otherwise. Any physician has a duty to the public as well, specifically when dealing with a patient who poses a direct threat to others. Conley is seemingly intent on informing the country how strong the president is, making him complicit in the downplaying of this disease when what the country needs is the bare truth.”

In short, Conley’s behavior during and after Trump’s stay at Walter Reed was unethical, dishonest and disgraceful. The question is whether there will be any *consequences* to Conley. Personally, I assumed there wouldn’t be, given that there have been no apparent consequences – at least so far – to the vast majority of Trump’s corrupt, slimeball cronies…let alone to Trump himself. Still, I’ve been hoping somebody would take action against Conley. And now someone has!

Namely, the non-profit watchdog group “The Checks and Balances Project” has filed a complaint against Conley with the Virginia Department of Health Professions, calling for them to revoke Conley’s medical license. As you can see, below, The Checks and Balances Project alleges that Conley engaged in “unprofessional conduct” by failing to enforce public health guidelines in the White House and by misleading the public about the president’s condition during his hospitalization with Covid-19. Also note that, according to this complaint, Conley was issued his medical license in July 2007 by the Commonwealth of Virginia. Finally, see here for the relevant Virginia Code section on “Unprofessional conduct; grounds for refusal or disciplinary action,” which spells out that the Board may “revoke any license for any of the following acts of unprofessional conduct” – “fraud or deceit in the practice of any branch of the healing arts”; “Conducting his practice in such a manner as to be a danger to the health and welfare of his patients or to the public” (ding! ding! ding!); “Performing any act likely to deceive, defraud, or harm the public” (ditto!); etc.

It will be very interesting to see if the Virginia Department of Health Professions Enforcement Division takes action in this case. At the bare minimum, they should take this complaint seriously, conduct an investigation, and proceed accordingly. 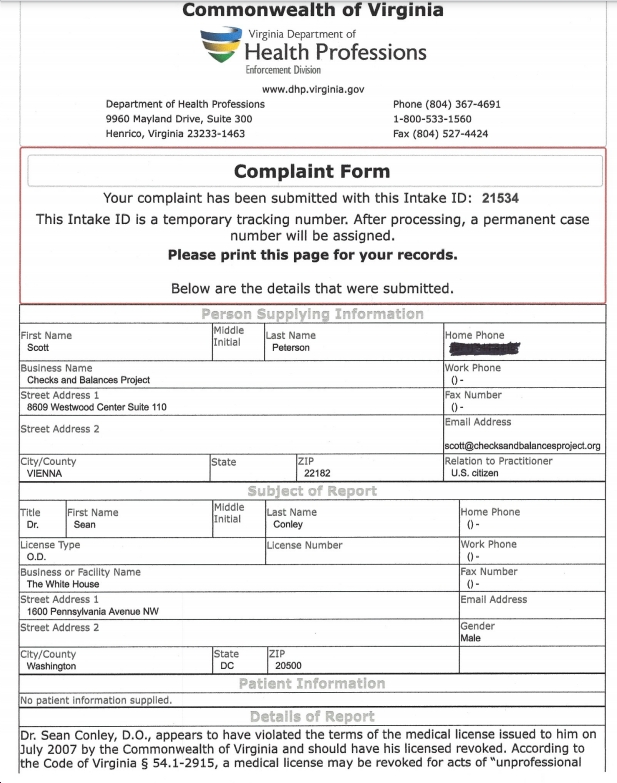 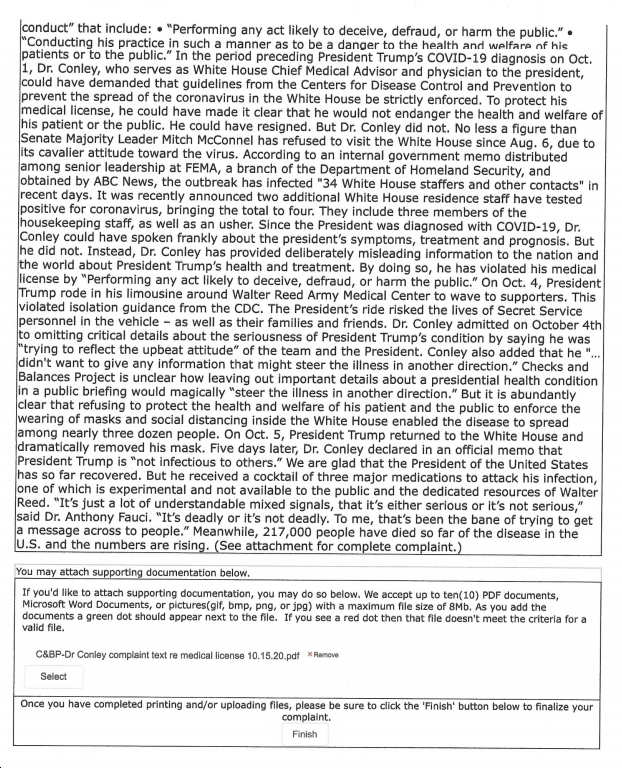 "This map is a GOP gerrymander & is awful in central Virginia. It cracks the Richmond suburbs, lowers the Black % in VRA-protected #VA04...The bipartisan commission has been a trainwreck so far" https://bluevirginia.us/2021/10/just-when-you-thought-the-va-redistricting-commission-fiasco-couldnt-get-even-worse-it-looks-like-it-is-doing-just-that#comment-5572251751 h/t @PoliticsWolf