Wow, Kirk Cox for Governor, don’t get too excited as you think about zzzzzzzzzzzzzz….

Sorry, where was I? Drifted off there for a moment, haha. Oh yeah, former Speaker Kirk Cox (R) – a dull right winger who presided over the rapid demise of Republicans’ Virginia House of Delegates majority, stepped out of leadership, but then…decided to run for governor, because what the hell why not?!? – now thinks the following:

“‘I am running for Governor because I cannot watch the Virginia we’ve built slip away. The timeless principles upon which our representative democracy were built are under attack, unchecked one-party Democratic control in Richmond is tearing our state apart, and people feel like their leaders are not listening,’ said Cox in his announcement. ‘We have to fight back against the cancel culture and the elitism, against misguided collectivist policies, and against a worldview that puts the government in charge of every facet of our lives.’”

Blah blah blah. But wait, you say you can’t get enough of this pablum? Haha. Well then, check out Cox’s scintillating kickoff video, in which he explains that he taught for years about “the timeless principles” of our “representative democracy” and also coached kids on “the values of character and hard work” – but laments that now, supposedly, “it seems all that is under attack.”

Oh? You mean our democracy and society are under attack by Donald Trump and by Trumpism more broadly? Nope, that’s not at all what Cox means. Instead, it’s that:

“Principles like free speech and the freedom to worship are being replaced with a cancel culture that says if you don’t act and think like big city elites you’re ignorant and bigoted; if you don’t vote like them you could be called worse. One-party control in Richmond tearing our state apart.”

That’s right, “one-party control,” which has done more in less than a year to move Virginia forward than Virginia Republicans did over the past…forever number of years. Fortunately, for all of us, we’ve got Kirk Cox – our hero! – to the rescue. It’s all totally selfless, too (nothing about his own political ambitions, of course), as Cox notes that he and his wife could have just spent “the next 20 years sitting on the beach,” but instead is selflessly sacrificing all that in order to…yep, run for the highest office in the Commonwealth of Virginia. Oh, and apparently in order to use a lot of mindless sports cliches, such as:

So basically, Cox is a right winger (his Project Vote Smart ratings have him at zeroes from Planned Parenthood and NARAL; a pathetic 13% from the Virginia League of Conservation Voters; a 100% rating from the Virginia Citizens Defense League; a 100% rating from the Family Foundation of Virginia; a zero rating from Equality Virginia; etc.) who’s not really much different, substantively, from Amanda Chase. Except that Cox is really, really boring, as you can see from the video, and if you’ve watched him over the years, including as Speaker (a job which Bill Howell was infinitely better at than Cox).

What else should you know about Kirk Cox? 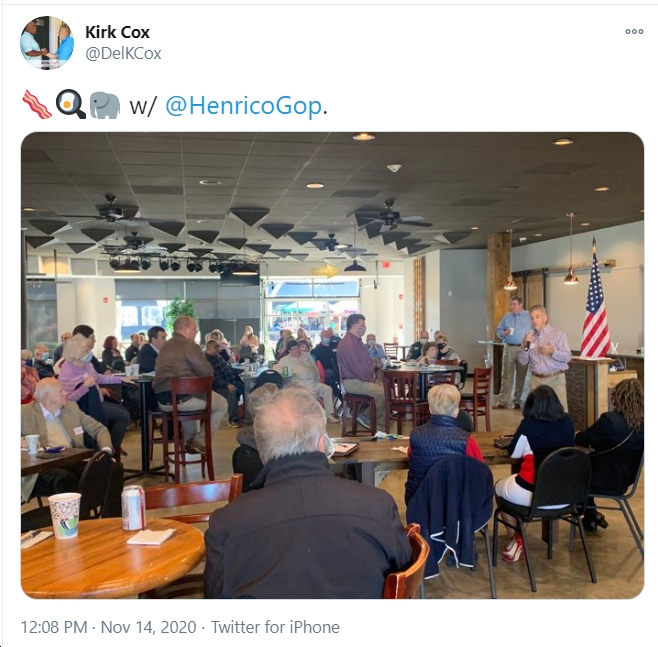 Any further questions about Cox, other than how we all need to make sure he never becomes governor of Virginia?