There’s nothing like timing! How fortunate we are in Virginia’s 5th Congressional District to have Dr. Cameron Webb running for Congress.  Webb works at UVA Medical Center, a teaching institution that offers its doctors  the ability to stay on the  cutting edge of information and technology that will help us with this pandemic.

Webb is extremely intelligent, is stimulated by multitasking and loves a challenge. These days, we need a leader who has those traits, and who wants to work to solve the healthcare dilemma so that all people will have access to affordable healthcare and prescription drugs.

His experience working as a Fellow in the Obama and Trump White Houses gave him firsthand knowledge of the workings of the federal government.  That experience proved his belief that “reds” and “blues” must respect each other and work together.  Which is what most Americans want as well; Braver Angels has just released a new poll that finds that 70% of the people they surveyed want our legislators to work together.

Webb was educated in  the Virginia Public School System and his mother worked in this system as a speech therapist. He has great respect for public schools and will work to ensure that the “lifeblood of the future of our nation” is supported. His opponent, Bob Good (R), has called for 5th District schools to not take federal funding and wants people to have school choice, which means taking money away from our public school systems. This does not represent all the Republican or Democratic families who count on the public schools to educate their children in the 5th District.

Cameron Webb is a man of deep faith who understands that we are all equal in the eyes of God. He respects law enforcement and wants to help them by supporting rebuilding the mental and behavioral health systems in our nation.

If you know someone who is undecided, please encourage  them to go to Dr. Webb’s website and learn more about him. This is where they will find his truth, instead of believing all the negative campaign ads that are on television. Today, more than ever, we can use a man of his honor and integrity to represent us in Washington.  We need Dr. Cameron Webb in Congress! 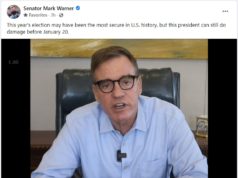 Video: Sen. Mark Warner on “the aftermath of this crazy election”; Chris Krebs “did his job, told the truth” and “for doing that, he...