Astoundingly, this guy – Del. Mark Cole (R-parts of Stafford County, Spotsylvania County, Fredericksburg, Fauquier County) -used to be Chair of the House Privileges and Elections Committee. Yet here he is, having a post removed by Twitter because – as Fredericksburg Democratic Committee Chair Caitlin Bennett points out (see screenshot, below) – he spread “false information about the election.”

Specifically, as you can see in the screenshot, below, Cole posted flat-out lies/conspiracy theories about Democrats supposedly “‘finding’ votes as they keep counting after Election Day,” and also supposedly “Trying To Steal The Election In Michigan, Wisconsin, And Pennsylvania.” Again this is all 100% false, not to mention insane, which is why Twitter found that the post violated its “rules against posting misleading information about voting.” What’s particularly pathetic about this whole incident is that Cole was called out on his tweet by several people – not Republicans, of course – but didn’t take it down, and apparently never would have…except that Twitter did it for him. That, sadly, is today’s Virginia GOP. Disturbing.

P.S. Also see below for some information on Cole’s past positions, including “his sponsorship of HB53, a bill in the House of Delegates which would ban involuntary implantation of microchips into humans by their employers”; his comment that “My understanding — I’m not a theologian — but there’s a prophecy in the Bible that says you’ll have to receive a mark, or you can neither buy nor sell things in end times, some people think these computer chips might be that mark”; his sponsorship of “House Bill 663, a bathroom bill restricting public restroom use according to a person’s ‘anatomical sex’, defined as ‘the physical condition of being male or female, which is determined by a person’s anatomy'”; his vote “against a bill to eliminate a law banning sexual intercourse before marriage in the 2020 legislative session”; etc. 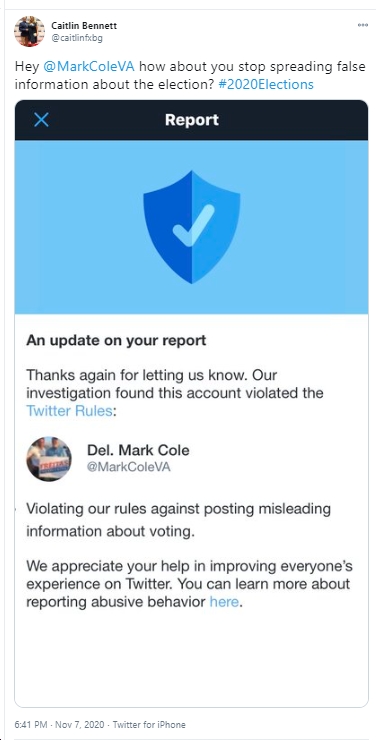 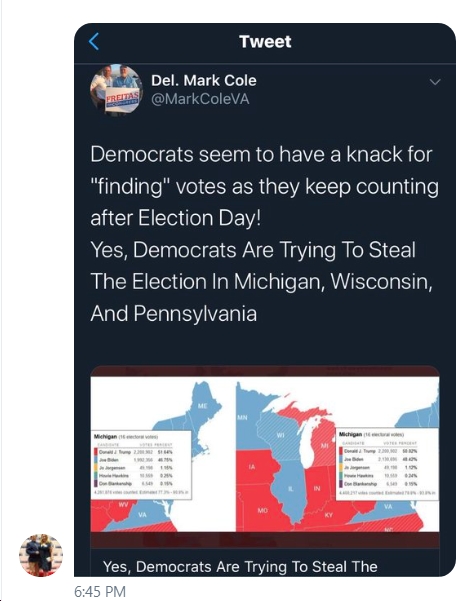