Independent journalist Brandon Jarvis first broke this story earlier this evening (see his tweet, below), followed by the Washington Post. I also confirmed it with my sources after Jarvis’ tweets. According to the WaPo story, Del. Jennifer Carroll Foy (D-HD2) “plans to release a video Tuesday announcing her decision — setting off a scramble to hold a special election before the General Assembly convenes on Jan. 13.” So stay tuned for that. The timing’s interesting, by the way, with former Gov. Terry McAuliffe expected to announce his candidacy for governor this week.

By the way, this situation is somewhat reminiscent of late 2008, when Democratic gubernatorial candidate Brian Moran announced he was resigning from the House of Delegates (after saying he wouldn’t do so), clearly in order to compete with his rival Terry McAuliffe – who had formed an exploratory committee for governor on November 10 – and his massive fundraising. Moran’s resignation resulted in a special election on January 13, 2009, that Democrats came within 17 votes of losing…in a “blue” district (Alexandria), no less, demonstrating the potential danger of Democratic voters “going to sleep” following a Democratic win for president. Let’s hope that doesn’t happen this time, with Carroll Foy’s resignation likely resulting in a special election for the HD2 seat in January or February, which will be an early test of Democratic turnout in the post-Trump era. 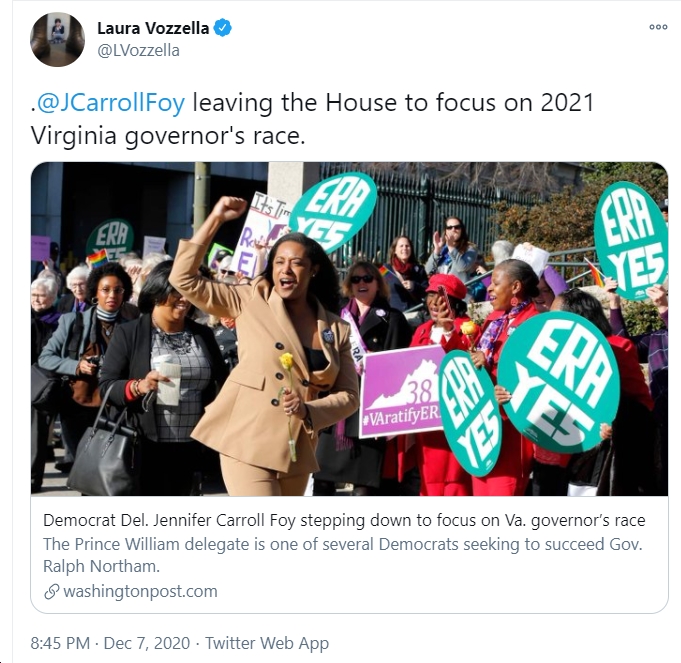