At the end of December 2019, which now seems like an eternity ago, we posted Virginia Politics 2020: 15 Things to Keep an Eye On. Let’s review them and see how things turn out [In green and bold following each item]. First off, though, note that a year ago, we had basically ZERO idea that there would be a global pandemic in 2020, and that it would dominate the news…so keep that in mind as you look through this list. 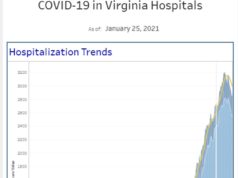 Interesting interview in @jacobinmag with Del. Lee Carter, a self-described socialist and Democratic candidate for VA governor in 2021. Here are a couple excerpts. https://bluevirginia.us/2021/01/monday-news-renewables-chief-hails-crucial-biden-climate-agenda-lawmakers-threatened-ahead-of-impeachment-trial-fauci-on-what-working-for-trump-was-really-like-tim-ka#comment-5241664448