On pretty much any list of the most extreme and/or worst members of the Virginia House of Delegates, one person’s name would have to be there – Del. Mark Cole (R-HD88). Why? Here are a few examples of why Cole is appallingly bad:

Anyway, so Democrats should just run a strong candidate and defeat this guy, right? Yeah, except…unfortunately, Cole’s district (HD88) is very “red,” having gone for Corey Stewart over Tim Kaine (albeit only by a 50%-48% margin), for Ed Gillespie over Ralph Northam (by a 10-point margin) and for Donald Trump over Hillary Clinton (by 16 points). In 2019, the Democratic nominee was Jess Foster, who was an excellent candidate, but unfortunately in this gerrymandered district, she lost by a 56%-44% margin. In the “blue wave” election of 2017, Cole was faced by Democrat Steve Aycock, with Cole winning by over 15 points. So…yeah, it’s a tough district for Democrats, at least pending some significant changes after 2021 redistricting.

For next year’s Virginia House of Delegates, I’m not sure if Jess Foster is planning on running against, or if other Democrats are going to throw their hats in the ring. But now, as you can see below (“hat tip” to Virginia Political Memes on this story), Ashton Spencer – a “lifelong conservative” who says he is appalled by what’s going on the Republican Party and is now leaving to become a Democrat – has thrown his hat in the ring. According to Spencer’s website, he’s running as a “conservative democrat [sic]…to build a better district for the everyday Virginian.”

Spencer lists his top priorities as “beating COVID 19”; balancing the budget; putting “more investment into alternative energy solutions”; “seek[ing] common sense low-cost solutions” to fight global warming; “legalize [marijuana], expunge and drop all related charges”; etc. On guns, Spencer says he “support[s] the 2nd Amendment, however I also support expanded background checks and common sense gun reform that both protects gun rights and people.” He’s also “100% in support of LGBTQ rights” and says that while he’s “pro-life,” he “understand[s] this debate is a hard one with very few 100% right answers.” Spencer adds that “Trump has been highly reckless, classless, demeaning, and damaging to our nation throughout his tenure” and that “[i]t was hard watching the party I wanted to build into something more reflective of the country, responsible, and respectable, just collapse.”

The questions are: 1) can a self-described “conservative Democrat” win the party’s nomination; 2) can he put together a strong, well-funded campaign to take on entrenched incumbent Mark Cole; 3) would he have “crossover” appeal in a general election? We’ll see, but I give him credit for leaving the Trump Republican Party and for putting his name out there as a Democrat against the egregious, extreme Mark Cole! 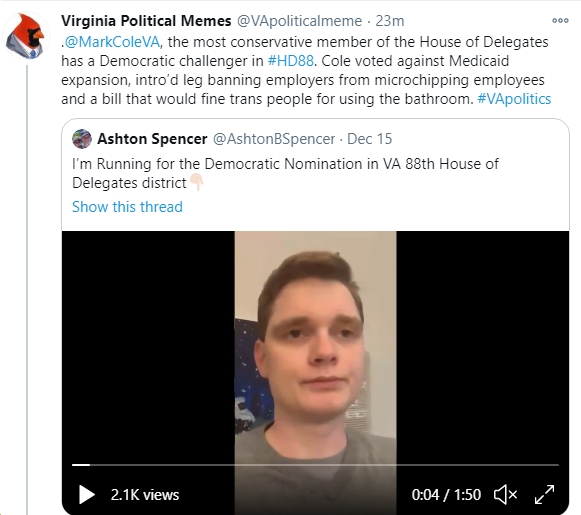