See below for the latest news, courtesy of Sarah Vogelsong of the Virginia Mercury, regarding the Mountain Valley Pipeline fracked-gas monstrosity, this time with the Trump-appointee-controlled Federal Energy Regulatory Commission (FERC) doing everything it can to, well, “FERC over” the environment and Virginians in general. Disgusting. Also, see below for a relevant comment by Del. Chris Hurst (“jfc, did MVP write this for FERC???”), and for highlights from the blistering – and 100% accurate! – dissent by Commissioner Richard Glick, as well as a statement from Wild Virginia. 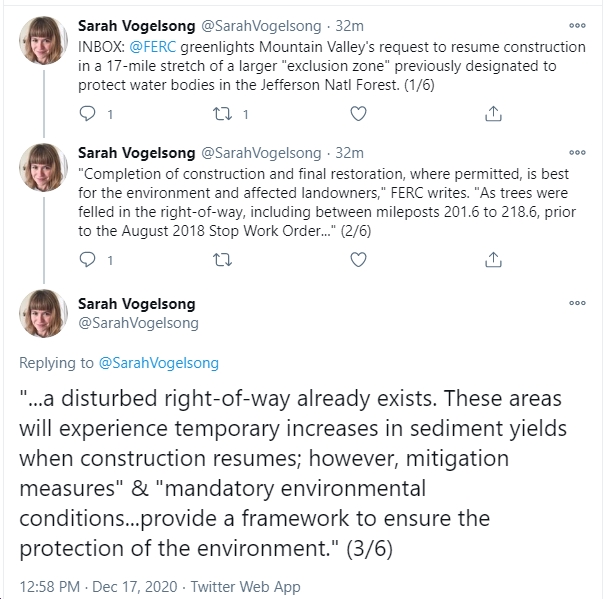 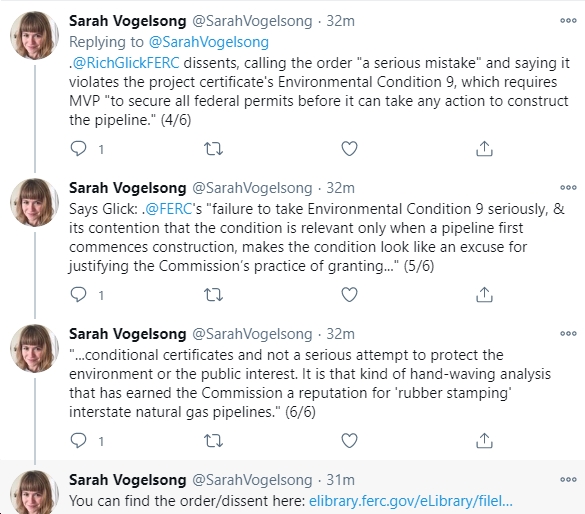 FERC Arrogantly Aids MVP’s Destruction
David Sligh
Through today’s order allowing MVP to resume destruction on more areas near our National Forest, the Federal Energy Regulatory Commission has again thumbed its nose at the law and shown utter disregard for common sense and the public good. As MVP lawyers have stated, the company wants to dig and blast as much as possible before the courts have a chance to review agency actions and possibly stop them in their tracks – as the courts have done repeatedly in response to agency failures. FERC seems more than willing to help MVP in its attempt to make court actions moot.
FERC continues to assert that its own requirement, that permits from all agencies be in place before construction starts, has no application when the project loses those same permits. As Commissioner Glick states in his dissent to today’s Order, this is a nonsensical position and seems to show that FERC’s certificate conditions are just for show, not to actually protect people and our resources.
Also, the Commission uses upside-down logic to justify its reliance on decisions not yet made by the Forest Service and the Bureau of Land Management. FERC says it has “no reason to assume that there will be a change to the proposed route through the Jefferson National Forest” but what it is actually doing is presuming that these other agencies will approve MVP’s proposals – a presumption that neither FERC nor these other agencies can legally make. It makes a mockery of the decisional processes all agencies must follow. The level of arrogance the Commission majority has demonstrated today is breathtaking and shameful.
There's no paywall on Blue Virginia, and we definitely want to keep it that way! If you want to help support our work, you can donate here - thanks! Also, you can sign up for our weekly email list here.