Check out the new poll from the Wason Center for Civic Leadership (newly renamed)  at Christopher Newport University:

Most parents are satisfied with Covid-19 school options, but 3 out of 4 still worry their children will fall behind;   Va. voters back public employee collective bargaining

NEWPORT NEWS, Va. – As families, teachers and school officials cope with whether to hold classes in person or online, 64% of Virginia parents say they are satisfied with how their child’s classes are being handled during the pandemic, according to a survey released today by the Wason Center for Civic Leadership at Christopher Newport University. However, 75% say they are concerned about their children falling behind in school.

“Parents are juggling work, caregiving responsibilities, and helping their kids through virtual school,” said Wason Center Research Director Rebecca Bromley-Trujillo.  “Most may believe their school systems are doing the best they can, but it’s no surprise that so many are worried about their children’s progress.”

In a sample of a Wason Center issues survey to be released in connection with the 2021 session of the General Assembly, voters were also asked whether public employees should be given the right to bargain collectively.  A strong majority (68%) support or strongly support that policy, while 25% are opposed or strongly opposed.  A law passed in the 2020 session allows, but does not require, cities, counties, towns and school boards to authorize collective bargaining for local employees, beginning in May. It does not apply to state employees.

Asked to assess the direction of the country, Virginia voters showed a marked shift compared to responses before the Nov. 3 election. In the Wason Center’s September survey, voters strongly disapproved of the country’s direction (76%-16%). More voters still say the country is headed in the wrong direction, but by a far smaller margin (49%-39%). The difference is almost entirely due to responses from Democrats, whose “wrong direction” assessment went from 97% to 22% after the election.

Voters were evenly divided about the direction of the state, with 48% saying Virginia is headed in the right direction and 47% saying it’s going in the wrong direction. Voters’ assessment of Gov. Ralph Northam’s job performance was likewise evenly split, with 47% approval and 46% disapproval. 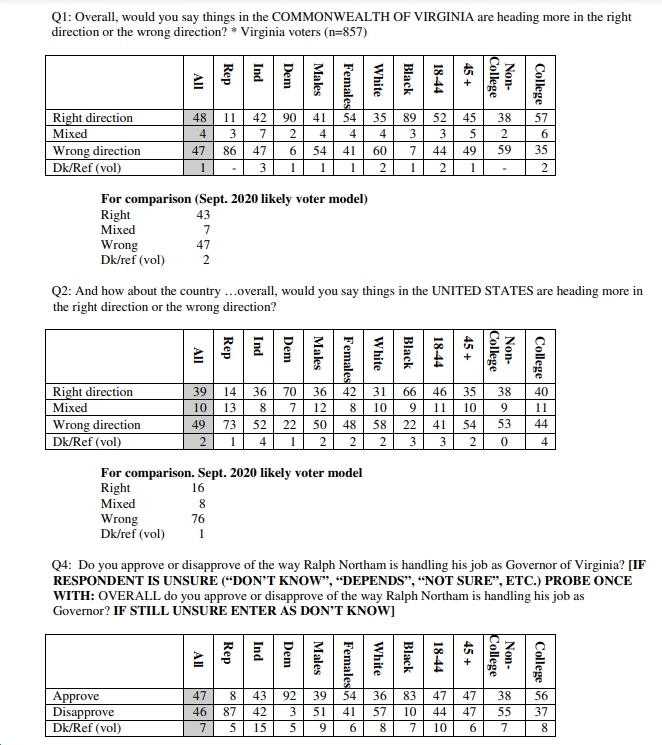