This weekend, both the Virginia Republican and Democratic Parties held meetings, and they couldn’t have been more different, whether in tone, content, level of competence, degree of unity, etc. For more on the VA GOP’s “raging dumpster fire” (as Republican Rep. Denver Riggleman accurately called it), see here. Note that it went on for hour after hour, with members arguing over parliamentary procedure and absurd/100% false allegations of Democrats supposedly messing with Republican primaries in some way or the other, and with a deeply divided committee voting narrowly to hold a convention in 2021, then with some members trying to “reconsider” that vote, then finally with yet ANOTHER vote to hold a convention, followed by Sen. Amanda Chase announcing she’d run as an independent for governor next year…or not. Crazytown, in other words!

Meanwhile, in stark contrast, see below for video from the Virginia Dems’ meeting, including a very simple and unanimous discussion and vote (discussion starting at around 6:58 and ending around 7:00 of the first video) to hold *primaries* next year for the Democratic Party’s gov, LG and AG nominees. Also see below for video of comments by Sen. Tim Kaine (starting around 38 minutes into the second video); presentations by candidates for Vice Chair of Technology (around 7:03 of the first video; also see below for an email with the results of the election, which was won by Ricardo Alfaro, by a 189-35 vote over Josh Stanfield).

Sen. Kaine broke his remarks into three parts: 1) “solidarity”; 2) “compliments”; 3) “challenges.” On the “solidarity” part, Sen. Kaine noted that 2020 has been a “very tough year” with COVID-19, with many people “deeply worried about your health or the health of people that you care about you,” with people you know possibly getting sick or even dying, with people you know possibly losing a job, etc, etc. Also, as Sen. Kaine pointed out, 2020 saw the “murder of George Floyd” and “other brutalities inflicted upon African-Americans that have brought to light…how far we still have to go to be a nation that’s really dedicated to the equality proposition that we said we were about 250 years ago.” And, Sen. Kaine added:

“These are challenges that have demonstrated why politics and political involvement is so important because so much of this in our country was made so much worse, unnecessarily worse – the death toll, the injury toll, the anti-science lies – because of bad politics and horrible leadership and people preaching doctrines against science and preaching that government was bad, when in fact we need government at times like this.”

On the “compliments” piece, Sen. Kaine said “you guys did a great job for the fourth presidential election in a row, you did what many would have thought unthinkable, even once, which was get Virginia’s vote solidly behind a Democrat in a presidential election.” And, Sen. Kaine added, “there’s no state in the country that’s had a political turnaround as dramatic as Virginia.”

As for the “challenges” heading into next year, Sen. Kaine pointed to “the tradition is the year after a presidential election midterm headwinds start blowing against us” and how “we have to beat that.” Also, Sen. Kaine argued, the Democratic primaries next year will be “chock full of good candidates…people we love, people we care about, people who are our friends; it’s hard to have races among friends.” Sen. Kaine noted that “part of the price of success is once people realize they can run and win as a Democrat, then a lot of people want to, and those races are sometimes the hardest of all, where it’s friend against friend.” Meanwhile, Sen. Kaine added, Virginia Republicans “have some candidates out on the field who are scary, absolutely scary.” Which means, in Sen. Kaine’s view, that after the Democratic primaries are over, we’re all going to have to come back together again and strongly support the party’s nominees next year. I couldn’t agree more! 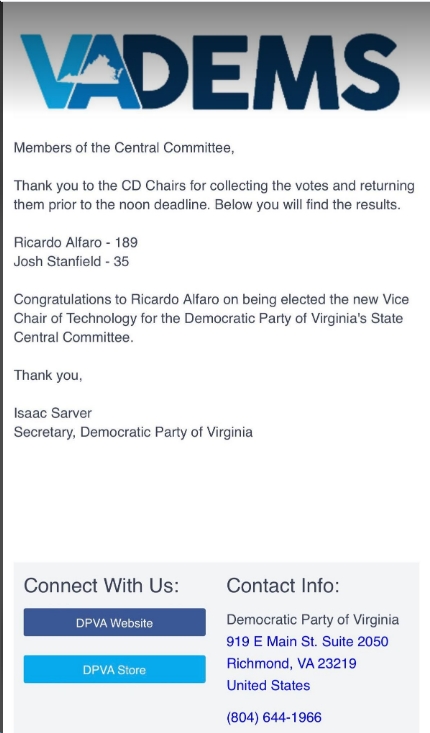 Audio: “At a recent campaign event, Youngkin suggested that the courts could reinstate Trump into office”