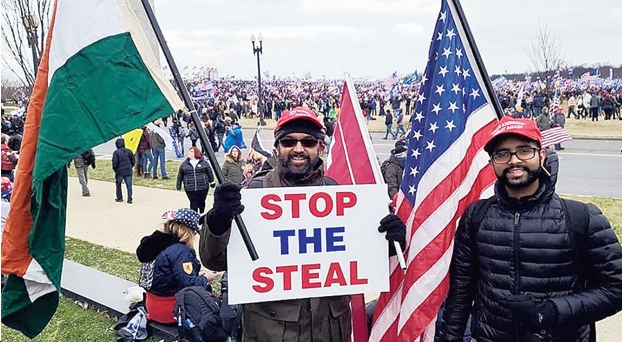 The South Asian Indian press went wild. Do a Google search of “Palathingal” and “Capitol” and you’ll find dozens of articles in Indian blogs and newspapers about “the man who flew the Indian national flag at the violent right-wing rally” at the U.S. Capitol on Wednesday.

Most of the Indian news stories relate the shock of the community that one of their own would be associated with a violent, anti-democratic action such as the assault and invasion of the U.S. Capitol. For his part, “Palathingal said he did not indulge in any kind of violence and asserted that it was carried out by some 50 odd people who had infiltrated among the pro-Trump protesters.” (India Times, 1/8/21) Palathingal added, “Trump rallies are always a lot of fun. And today was not an exception.” (The Hindu, 1-7-21)

Palathingal, along with his fellow Republican failed School Board candidates Zia Tompkins and Priscilla DeStefano, also has been a spokesperson for the OpenFCPS/DoBetterFCPS campaign. OpenFCPS is a campaign to weaponize the schools’ response to the pandemic in order to berate the leadership of the Fairfax County School Board for political purposes. Much in the same grain as Palathingal’s statements on the terrorism displayed at the U.S. Capitol on Wednesday, the leadership of DoBetterFCPS has twisted those events into yet another attack on the Fairfax County School Board and FCPS teachers:

It’s also worth noting that OpenFCPS, DoBetterFCPS, and the Open FCPS Coalition continue the anti-LGBTQ themes of Palathingal’s and the other Republican candidates’ campaigns for school board in 2019.

The FCRC appears to have adopted Palathingal’s bizarre tactic of blaming anti-Trump people for Donald Trump’s incitement of an insurrection against the U.S. Congress. While Palathingal attributes (without any evidence) the violence to a scapegoated “Antifa,” the FCRC somehow manages to blame the Democrats, the media and President-elect Biden:

While the FCRC has “condemned ALL political violence,” note that it has made no mention of the political and civic leaders who organized and incited the ransacking of the Capitol.

Palathingal’s involvement in the rally, along with that of Virginia State Senator Amanda Chase and Delegate Dave LaRock, seems to be all part of the same picture of the Republican Party of Virginia’s tacit and explicit endorsement of Donald Trump’s incitement of the insurrection against the U.S. government that we witnessed on Wednesday.