Former/two-term Virginia Lt. Gov. Bill Bolling (R), who was himself screwed out of a chance to become governor by the Virginia GOP’s decision to switch from a primary to a convention in 2013, comments on the latest VA GOP craziness, writing:

“The bottom line is that Virginia Republicans have once again managed to create a nightmare scenario that will inevitably benefit no one, other than the Democrats.”

It’s hard to argue with that, lol! 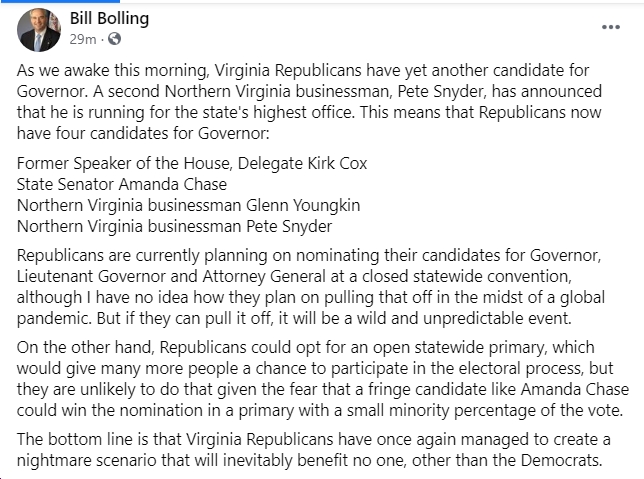 Good stuff by Fairfax County...under *Democratic* leadership (the one "no" vote was, of course, a right-wing Republican) https://bluevirginia.us/2021/10/tuesday-news-trump-files-lawsuit-to-block-release-of-jan-6-documents-just-how-disastrous-is-manchins-climate-obstruction-media-outlets-should-not-use-colin-powells-death-to-push-vac#comment-5577247524 h/t @Broder512