Those of you active in Virginia politics back in the mid 2000s – when I launched the blog “Raising Kaine,” and when the Virginia political blogosphere was flourishing, on both sides of the proverbial political “aisle” – almost certainly remember Chad Dotson, aka “John Behan,” aka “Commonwealth Conservative.” Well now, Dotson is running as a Republican for Virginia State Senate in deep-deep-“red” SD38, which is open due to the recent death of State Sen. Ben Chafin (R) of “complications from COVID-19.”

Based on the long list of endorsements for Chad Dotson – former Governor and Senator George Allen, Del. Terry Kilgore, Del. Will Wampler, Del. Nick Rush; several Wise County Supervisors; the Dickinson County Commonwealth’s Attorney; the Pulaski County Chairman of the Board of Supervisors; the Buchanan County Sheriff, Treasurer and Commissioner of the Revenue; etc.; it looks like the former blogger – and also “a professor and dean of students at the Appalachian School of Law in Grundy…former judge and commonwealth’s attorney in Wise County” – could very well be the frontrunner for this job.

Note that the 38th Senate District Republican nomination will be determined this Thursday, with the special election set for Tuesday, March 23. Of course, in this deep-red district (went 75% for Trump in 2016), the Republican nomination is, for all intents and purposes, the election (also, currently, there’s no Democratic candidate for the position). And right now, Dotson – once known as “the top conservative, Republican blogger in Virginia”; also founder of “the Old Dominion Blog Alliance, a network of conservative and Republican blogs throughout Virginia” – looks like he’s got a good shot at winning it.

By the way, see the Internet Archive’s “Wayback Machine” if you want to check out  what Dotson was blogging about at “Commonwealth Conservative” back in the day. Here are a few sample headlines: 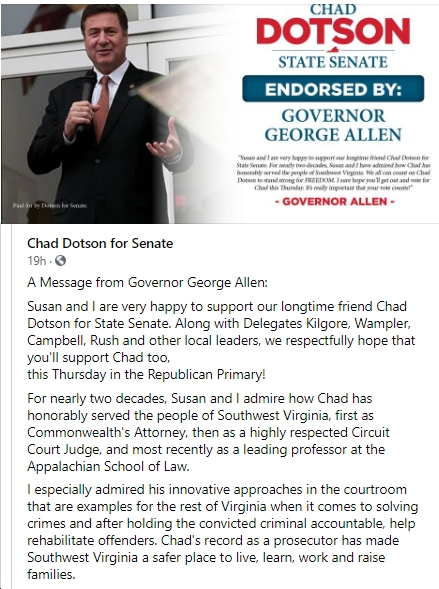 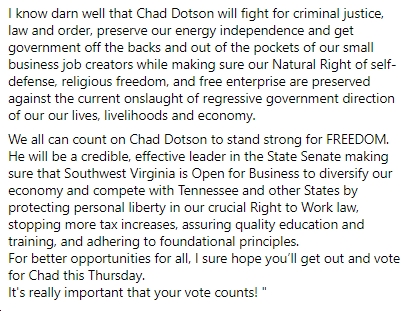 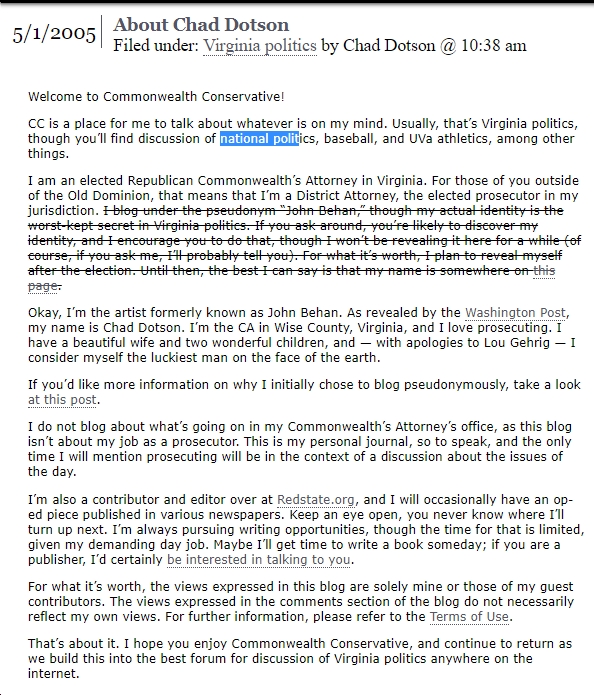