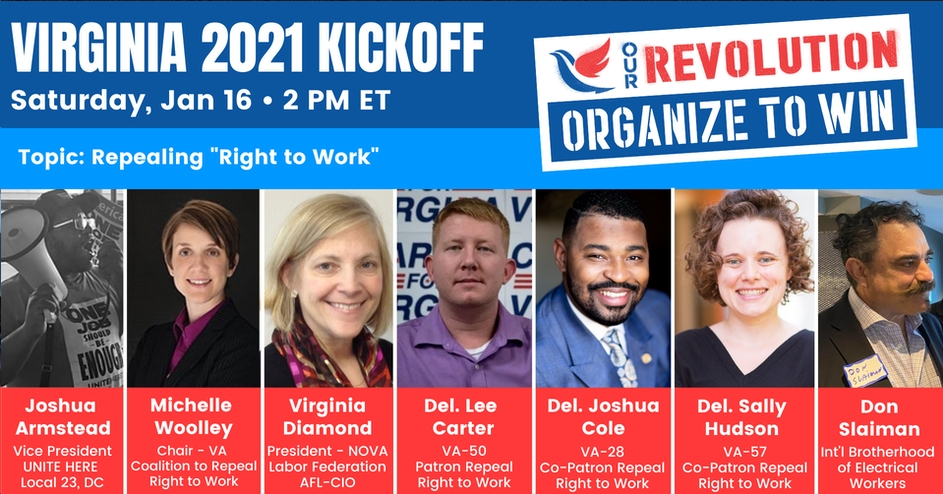 Living in a so-called “Right to Work” state might sound like a good thing. It might sound like Virginia workers have some special rights, a leg up on workers from non “Right to Work” states. I grew up in Virginia, and that’s what I thought it meant when I heard the slogan the first hundred times. The phrase is so benign, I didn’t question it until a few years ago. And the more I learn about this issue, the more complex it becomes. It’s much bigger than a misleading slogan.

My takeaway from Our Revolution Virginia’s virtual “Repeal Right to Work” event is that this seemingly innocuous phrase has been used to manipulate citizens into giving up their rights. The law might more aptly be called “the right to work for less” and has disturbingly racist, even white supremacist origins. Notably, Virginia is the only blue state among 27 “Right to Work” states.

Watch video of the virtual event, which was lively, informative, and filled with compelling speakers who are passionate about workers’ rights. Del. Lee Carter is now leading a charge in the Virginia state legislature to repeal the state’s “Right to Work” law with House Bill 1755. Two other speakers – Virginia Delegates Joshua Cole and Sally Hudson – are co-patrons of the bill. If you want to get involved in this fight, you can demand your representatives support Carter’s bill. Carter has introduced similar legislation for three years, and it’s crucial that the bill gets out of committee and advances to a floor vote.

While purporting to save workers from being forced to join a union (which is prohibited by federal law anyway) and stopping workers from having to pay union dues (which makes unions less effective because unions need money to fight for workers’ rights), speakers explained that “Right to Work” laws actually make it harder to unionize and easier for employers to penalize workers when they try to organize. These laws also lead to lower wages and increased income inequality, according to speakers. 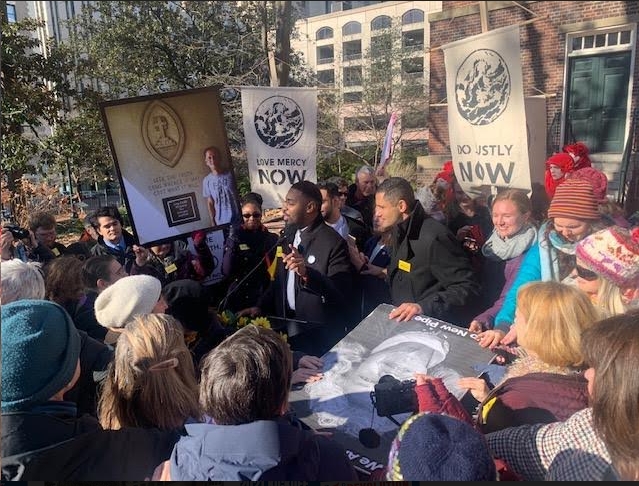 “In our glorious fight for civil rights, we must guard against being fooled by false slogans, such as ‘right to work.’ It is a law to rob us of our civil rights and job rights. Its purpose is to destroy labor unions and the freedom of collective bargaining by which unions have improved wages and working conditions of everyone…Wherever these laws have been passed, wages are lower, job opportunities are fewer and there are no civil rights. We do not intend to let them do this to us. We demand this fraud be stopped. Our weapon is our vote.”

Del. Carter spoke about the racist origins of “Right to Work,” the need to repeal this anti-labor law, and the bill he’s introduced into the state legislature.

“There was a guy down in Texas a guy named Vance Muse who actually popularized that idea of calling it ‘Right to Work.’ Now Vance Muse was very explicitly racist. He was incredibly explicit when he said that ‘Right to Work’ laws were about the right to work without an integrated union. He made it clear … that it was about not having white workers and Black workers joined together and fighting for a better life for both.”

Wondering what exactly Vance Muse said about “Right to Work” and how offensive it was? If “Right to Work” was not passed, Muse said, “white women and white men will be forced into organizations with black African apes . . . whom they will have to call ‘brother’ or lose their jobs.” 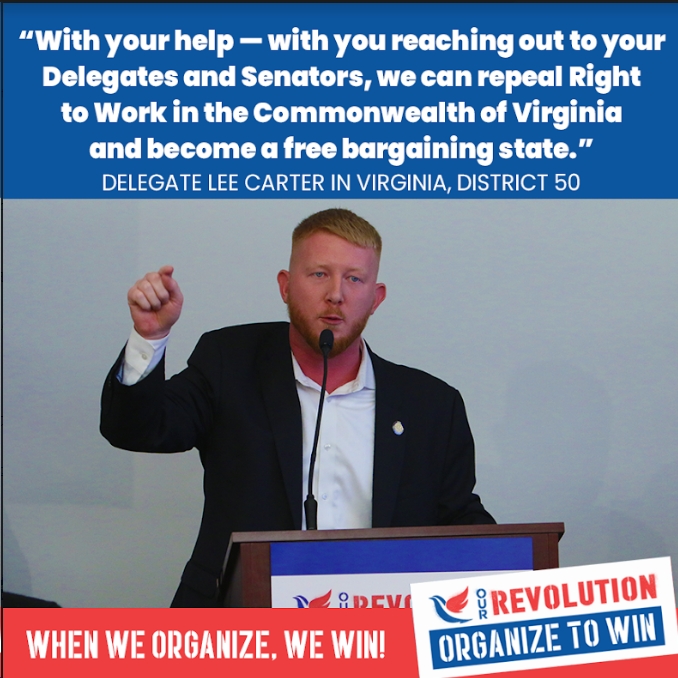 Carter went on to say that [Being a ‘Right to Work’ State] is:

“a very large part of why Virginia has such low union density … why Virginia, for two years running, was named the worst state in the union for workers … why Virginia has been named for several years now the most economically unequal state in the union. But we have fought for 74 years to get rid of this law and that fight will continue until we win, and with your help we are going to win that fight this year … and have Virginia become the 23rd ‘free bargaining’ state, to allow unions and employers to sit down at the bargaining table and say that compensation for the work done by the union can be a part of the collective bargaining agreement.”

Speakers also made the striking point that this issue is not just about unions, or labor. Workers’ rights are so fundamental to the operation of a free society: labor laws and specifically “Right to Work” laws impact many other facets of our political life, from racial justice to environmental justice. Several suggested that the Capitol riots were directly influenced by the right’s war on unions and resulting income inequality.

“In the wake of the terrible threats to our democracy that we’ve been observing,” she said, “I think it’s very important to point out that there’s never been a strong democracy without a strong, vibrant labor movement. There has never been a stable middle class society without strong unions, and there is no question that the corporate attacks and destruction of unions in recent decades is a central element in the erosion of our civil society and in creating a climate for right wing demagogues to take hold. The destruction of unions has also led to the greatest wealth inequality in 100 years. The largest number of victims, of course, are people of color people, who benefit disproportionately from union membership and are the victims of union busting more than anyone.”

Del. Joshua Cole spoke about the issue as it relates to racial justice.

Another quote Cole shared from Dr. King demonstrates the civil rights’ leader’s broad support for labor rights: “The labor movement was the principle force that transformed misery and despair into hope and progress.”

What can readers do now? We can urge our state representatives to support Carter’s bill to repeal Virginia’s “Right to Work” law, and share this petition widely. We can also bring this issue to forefront of the upcoming election for Virginia’s governor. Lee Carter is running for governor. In a crowded Democratic field, Carter stands out as a highly progressive candidate and as a champion for labor rights. We can demand that all candidates speak on this issue, take a position, and make this an issue that matters in 2021.

“Right to Work” could also be a key issue in the race for Virginia’s lieutenant governor. One Democratic candidate, Sean Perryman, has already spoken out in favor of repealing “Right to Work” in this passionate op-ed in The Washington Post. If you want to learn more, you can read up on the intricacies of the issue and why “Right to Work” laws favor businesses, not workers. On a separate but related issue, you can urge President Biden to increase the federal minimum wage. Thanks.