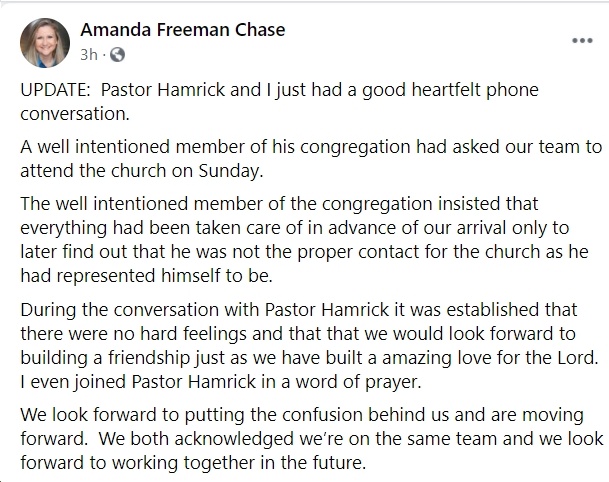 The drama with far-right State Senator Amanda Chase, a candidate for the Virginia GOP gubernatorial nomination, continues…this time at the Cornerstone Chapel in Leesburg. Check it out, and h/t to VA Capitol Square for the “heads up!”

P.S. I’m told by someone who knows about it that this church is “very, very conservative. Dave LaRock, Geary Higgins conservative.”

This morning I attended Cornerstone Chapel in Leesburg, Virginia at the request of a congregant with Republican candidate for Attorney General Chuck Smith. Cornerstone is a mega church in Leesburg.

I hesitate to share this but it’s part of my journey and perhaps a message to a pastor who reads my post. Hope you hear my heart.

Elected leaders are public servants. We are on the front lines fighting for your freedoms. We leave our families for weeks at a time and many of us are away from our home churches on Sunday. When I am away, I always try to find a church where I can get refueled and spend time with fellow believers.

My team made arrangements ahead of time and the pastor knew we were coming. When we arrived we followed instructions provided to let one of the ushers know we were there.

The usher mentioned that he would talk to the senior pastor and get back with us and we could wait in the church’s cafe. We waited. And we waited.

When the usher came back he told us that if we had any firearms we would have to leave them in the car. We were told their church had their security. I had to actually explain to them that as a state Senator and candidate for Governor I had threats that warranted being able to carry myself. My personal aides also carry and are prior law enforcement and military.

He followed that with I would not be allowed to speak, which I was fine with at the time. And then we were ushered in with Chuck Smith candidate for AG.

Pastor Hamrick proceeded to give Chuck a thorough introduction and then allowed him to speak and address the congregation.

Then it was my turn or so I thought. The pastor moved onto his sermon about Second Chances.

The pastor never mentioned my name. Never mentioned I served in the Virginia Senate and that I was on the front lines fighting for our freedoms.

Can I be honest and tell you it was all I could do to choke back the tears? To sacrifice so much only to be treated like a third class citizen hurts.

The Bible says to give honor where honor is due and to pray for those in authority.

After the service several supporters recognized me in the crowd and came up to greet me.

Once the service was over I was able to flag down the pastor and introduce myself. He seemed very busy, hurried and indifferent but said if I stuck around for the next service he would recognize that I was there. I gave him my card and said he was welcome to call me but I had to leave because I had a prior commitment.

How ironic that the sermon was on Second Chances.

I believe in second, third and fourth chances. Doing my best to keep my eyes on the true meaning of Palm Sunday.