UPDATE 3:35 pm – It looks like it’s just going to be Jay Jones tonight… 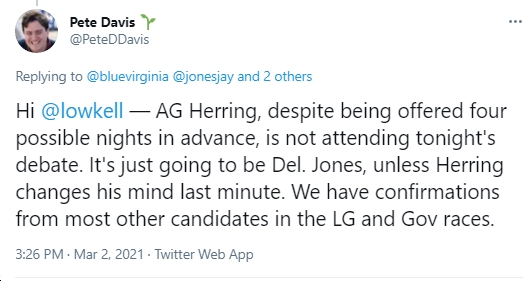 “Majority Leader Herring has been a crucial partner in advancing landmark civil rights legislation through the House of Delegates, and I’m honored to have her support,” said Attorney General Mark Herring. “With the Office of Civil Rights set to be established, I look forward to working with Majority Leader Herring to root out systemic inequities and continue to build off of the progressive framework we’ve laid over the next four years.”

“As our Commonwealth and our nation grapple with a long-overdue awakening on racism and inequality, we need leaders like Jay Jones who have a vision for transforming the Attorney General office to confront these challenges. That’s why I’m endorsing Jay Jones to be Virginia’s next Attorney General. I know from experience that Jay is accessible, a good listener and that he values what’s right over what’s politically expedient.”

“Mary Sue Terry was a trailblazer and one of the most popular elected officials of her time, and I am beyond honored to receive her support,” said Delegate Jay Jones. “As Attorney General, Mary Sue Terry led from the front. From women’s rights to protecting our environment, Mary Sue Terry made Virginia a more progessive Commonwealth for all. I consider her to be the most consequential and successful Attorney General that Virginia has ever seen. I look forward to following her lead and bringing a return to bold Democratic leadership to the Attorney General’s Office.”

Mary Sue Terry served as Attorney General from 1986 to 1993, was the first woman elected to statewide office in Virginia, and was the first Virginian to lead the National Association of Attorneys General. Before 2013, Mary Sue Terry was the only other Democrat elected to the office in 35 years. Prior to serving as AG, Mary Sue served in the Virginia House of Delegates and as an Assistant Commonwealth’s Attorney. Throughout her career, Mary Sue prioritized women’s rights, insurance rate reform, and keeping our drinking water safe. Mary Sue Terry now resides in Patrick County, VA.

Jay Jones is a state Delegate from Norfolk who has championed justice reform, consumer protections, and defending our environment. If elected, Jay would be Virginia’s first Black AG.

As AG Mark Herring Ends Tremendous 8-Year Run, He Reflects on His Legacy: “I brought a whole new vision for the job, and the...