You might not see much coverage in the Richmond Times-Dispatch of about a million important topics, but one thing they’re highly focused on is the Virginia Parole Board and a supposed “scandal” they think they’ve uncovered. This morning’s paper, for instance, has not one but *two* stories on…whatever it is the Times-Dispatch thinks it’s onto with the “controversy” (or whatever it is) here. First, though, check out what Gov. Northam’s Chief of Staff, Clark Mercer, had to say a few weeks ago on this topic:

“This is an incredibly important issue, frankly with a lot of unsubstantiated accusations being bandied about and a lot of politics being played...There have been individuals that have been very loud and very critical of parole in general – they don’t support parole…and in this particular case, they have been VERY loud in their opposition to the parole decision of Mr. Martin.”…Those draft reports contain unsubstantiated claims that are being bandied about as fact by political opponents – that is “incredibly irresponsible.” The IG is required by law if he comes across any credible example of criminal activity to pass that on to law enforcement… the IG “has done no such thing.” Gov. Northam has called for an independent investigation. There were leaks starting last summer, “including by members of the General Assembly.” “We want the investigation to run the gamut.” May include outside counsel.

Also, check out what VA Secretary of Public Safety Brian Moran had to say recently:

“We have nothing to hide in the governor’s office…it’s out there, we’ve addressed this numerous times and the sooner we can remove any cloud over this issue, the better, and so we do want it handled in an expeditious fashion.”

With that background, check out the Richmond Times-Dispatch’s “audio exclusive” this morning:

“Senior staff members in Gov. Ralph Northam’s administration questioned the power of Virginia’s watchdog agency to investigate the Virginia Parole Board during an ongoing investigation and reprimanded Inspector General Michael Westfall for how many investigations his office was conducting during a tense meeting last summer.

A recording of the meeting obtained by the Richmond Times-Dispatch conflicts with the governor’s previous account that his team did not intimidate Westfall and his staff.

The 71-minute recording of the Aug. 14 meeting also shows that Northam’s chief of staff asked Westfall if the Office of the State Inspector General planned to investigate Republican lawmakers for releasing to the press a copy of an OSIG report that concluded the parole board violated state law and policies in releasing Vincent Martin, who was sentenced in 1980 to life in prison for killing a Richmond police officer.”

Now, clearly, a few reporters seem to think they have a big story here. And maybe they do, maybe they don’t. But for his part, Del. Don Scott (D-Portsmouth) is not impressed, to put it mildly!

“I kept listening and waiting for ‘All The Governor’s Men ..and Women’ to order OSIG staff to alter their report. Didn’t happen. It was apparent that Govs team didn’t know about first draft. How do we know? OSIG said it at end of tape. Listen to the audio and be bored stiff.”

“I’m pissed. I listened to that whole tape hoping I was going to get ‘The Wire’ and I got some white police wiring up on other white people discussing how paperwork was not followed to the letter on a decision to parole a black man. They hate parole and parolees. Listen closely.”

“Brian Moran had it right when he said they were being used as a political tool. Someone volunteered and taped their colleagues in a meeting were they claimed to be bullied to use later. That’s gangsta politics! Who wants to meet with OSIG now? Better meet in the sauna! Listen.”

“I didn’t hear anyone being ‘ripped’! That was about as polite a meeting as you can deceptively tape. I thought I heard tea being served.” 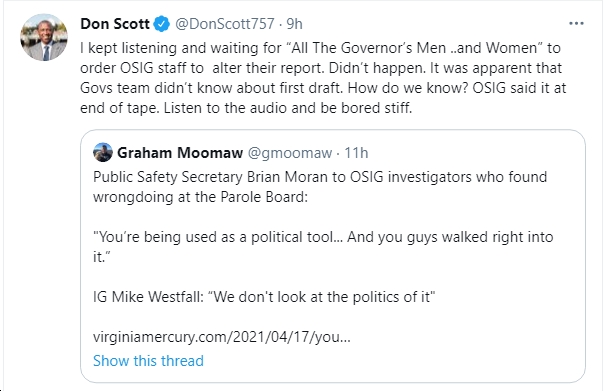 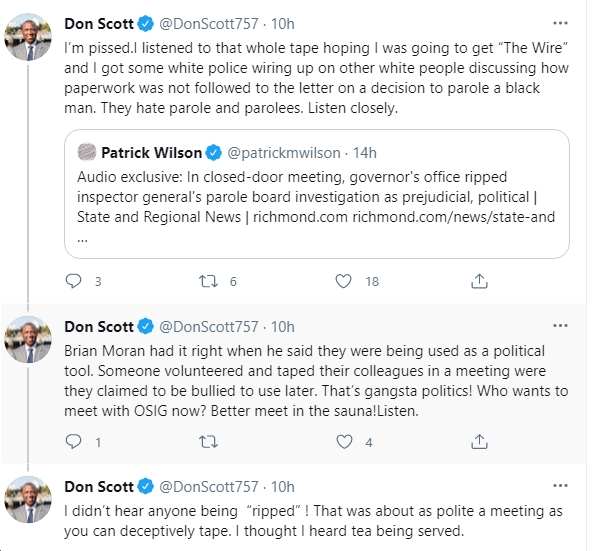 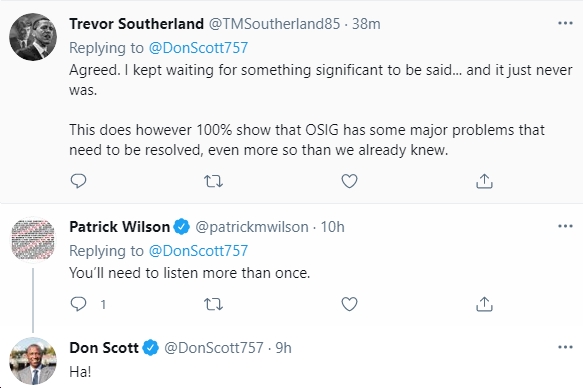 Ha! is right.  Del. Scott “need[s] to listen more than once?” Even though he’s a super-smart guy who is quite capable of understanding it the first time through? Alrighty then…LOL.

Anyway, check out the audio for yourself if you’re interested. Personally, I listened for a while before concluding almost exactly what Del. Scott said: 1) it was pretty boring; 2) “I kept listening and waiting for ‘All The Governor’s Men ..and Women’ to order OSIG staff to alter their report. Didn’t happen.”; 3) you really do NOT need to listen more than once. What do you think?