Having fallen prey to the Trump cult, including wild lies about supposed irregularities with the 2020 election (of which there were essentially zero, in fact), Republicans across the country are currently in an all-out push to *restrict* people’s – particularly Black and Hispanic people’s – right to vote. Of course, there are many Republican lawmakers who, presumably, know that all the talk about “Dominion voting machines,” “voter fraud,” etc. are completely false/baseless/lies. So why are they pushing to pass laws to address a seemingly non-existent problem? At least two reasons spring to mind: 1) because many Republicans know that they are less likely to win elections if most Americans vote; and 2) because they are terrified of their “base,” as well as of right-wing media, and are pandering to them and/or trying to pacify them. No matter what the motivations, though, what Republicans are doing right now is blatantly anti-democracy, un-American, racist and just flat-out wrong.

Alone among the states of the former Confederacy, Virginia has become a voting rights bastion, increasingly encouraging its citizens — especially people of color — to exercise their democratic rights. In the last 14 months, the state’s Democratic-controlled General Assembly and Mr. Northam have together repealed the state’s voter ID law, enacted 45 days of no-excuse absentee voting, made Election Day a state holiday and enacted automatic voter registration for anyone who receives a Virginia driver’s license.

Virginia, which for nearly 50 years had to submit changes to its elections to the federal government for approval under the Voting Rights Act’s preclearance requirements, has now effectively imposed the same covenants on itself, an extraordinary step for a state with a long history of segregation and racially targeted voting laws.

Amazing. And the results? Check this out!

Once Democrats took full control of state government last year, one of the first bills they passed created one of the longest early-voting periods in the country — a 45-day window for no-excuse absentee voting, in which people can vote remotely without having to provide a rationale. More than 2.8 million Virginians voted early in the 2020 election, nearly five times as many as did so in 2016.

Of course, the COVID-19 pandemic – as well as the burning desire to defeat Trump – was also a major motivation for voting-by-mail in November 2020. But still, it’s clear that making it a lot easier to vote early, without having to come up with an excuse, was a major factor in the surge we saw.  And that’s a very, very good thing, no matter what Virginia Republicans try to (falsely) claim about “voter fraud” or whatever bull****.

Anyway, following the NY Times article on Virginia becoming a voting rights bastion in the “old Confederacy’s heart,” one of that paper’s top political/elections reporters – Nate Cohn – this morning tweeted in response that, actually (in his view):

“Virginia’s an example of how hard it can be to see any tangible consequence to changing voting laws. Perhaps no state did more to make it easier to vote. It basically passed HR1. Yet the increase in turnout was average and the Black % of the electorate fell… That doesn’t mean the law is good or bad. It doesn’t even mean that it didn’t contribute to higher turnout. But it’s a reminder that these laws, including HR1, don’t necessarily have the existential stakes that folks on both sides of the aisle seem to assume…Keep in mind that Virginia had tougher voting laws than just about anywhere: basically no early voting, photo identification laws, etc. It was arguably the single hardest state to vote in, circa 2016 So you’re looking at a huge net-change in law here.

Wait, what? Is this factually accurate? And even if it IS factually accurate, why make this argument? First of all, of course, it’s NOT factually accurate to the extent that it’s talking about the Voting Rights Act of Virginia (“requires all local elections administrators to receive public feedback or advance approval from the state’s attorney general for changes like moving voting precincts or elections registrars’ offices, and allows voters and the attorney general to sue over voter suppression…expressly prohibits any racial discrimination or intimidation related to voting”), since that was literally just signed into law on Wednesday of this week, so obviously had NOTHING to do with the 2020 election. Which means Cohn’s argument that bills like this – or the federal H.R.1 – “don’t necessarily have the existential stakes that folks on both sides of the aisle seem to assume” is not based on even a single election here in Virginia since that bill was signed into law.

Of course, there were other bills enacted prior to the Voting Rights Act of Virginia – including repeal of voter ID, 45 days of no-excuse absentee voting, automatic voter registration when receiving a driver’s license, etc.  So how did Virginia turnout fare in 2020, after those bills were passed? A few points:

In sum, it looks like after Virginia enacted provisions making it easy to vote early, to register to vote, etc., all of those numbers went up. As for turnout by people of color, the number definitely went up between 2016 and 2020, although the percentage stayed the same (possibly due to a surge of white voters both for and against Trump?). But again, none of this has anything to do with the Voting Rights Act of Virginia, since that was just signed into law, literally THIS WEEK.

Which brings us back to Nate Cohn’s tweets, some of the responses to which have been scathing, such as:

You are speculating on how best to game a wildly unjust law. It’s a way of normalizing a massive assault on voting rights – turning it into a question of, “Maybe this unjust restriction in voting rights will benefit this party not harm it.” It’s sort of bizarre to see the unjust policies of an anti-democracy party weighed dispassionately for benefit to a different party. “LOL look they are incorrectly removing basic democratic rights!”

“Virginia has not done more than any other state to make it easier to vote. It does not have same-day registration. It does not have voter pre-registration. It does not have all-mail elections. The reforms it *has* adopted can take a while to have an effect on turnout (e.g., AVR)…Meanwhile, it’s a swing state, where millions of dollars are invested in each election to drive up turnout, regardless of laws. My prior is that any voting law change would have less of a turnout effect there, because political organizations/campaigns will mobilize in response…More generally, I don’t think it’s appropriate to look at one state’s adoption of some reforms and take that as an indication of how a national reform bill would change turnout. HR1 would likely shift GOP strategy away from voter suppression…”

“And AVR began being implemented months at best before the election. That’s not an immediate policy effect.”

More broadly, the flaw in Cohn’s reasoning is that he looks at just one state (Virginia), comparing just two elections (2016 and 2020) – an extremely low “n”/sample size, btw –  and then appears to jump to a massive conclusion that there isn’t “any tangible consequence to changing voting laws.” Cohn also implies, very cynically, that restricting people’s right to vote doesn’t really matter in and of itself, and can basically be shrugged off if there’s no “tangible” net impact, at least that jumps out at him, on the number of voters, makeup of the electorate, etc. Why would he do that? Got me, but it’s really, really obnoxious, and really a horrible message to be putting out into the ether, that we shouldn’t even bother fighting voter suppression efforts and working to expand voting rights, because whatever, nothing matters anyway? Let’s just hope there aren’t a lot of people in political journalism who think like this, but unfortunately, my guess is that the mindset exhibited by Nate Cohn in his tweets this morning is widely prevalent, much to all our detriment… 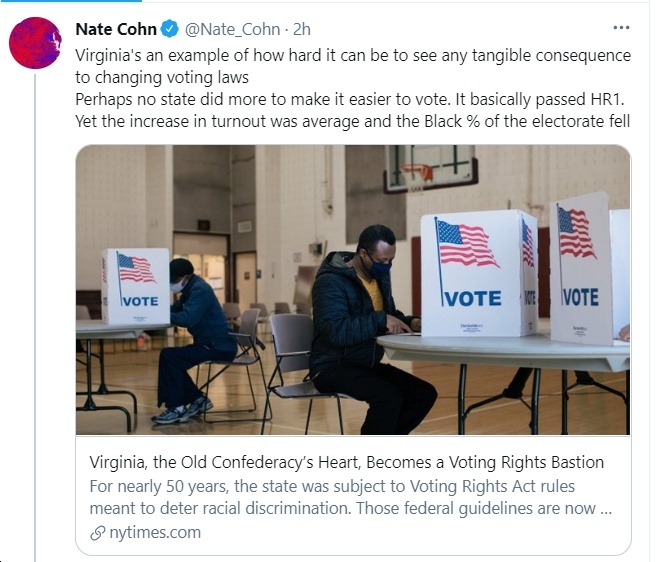 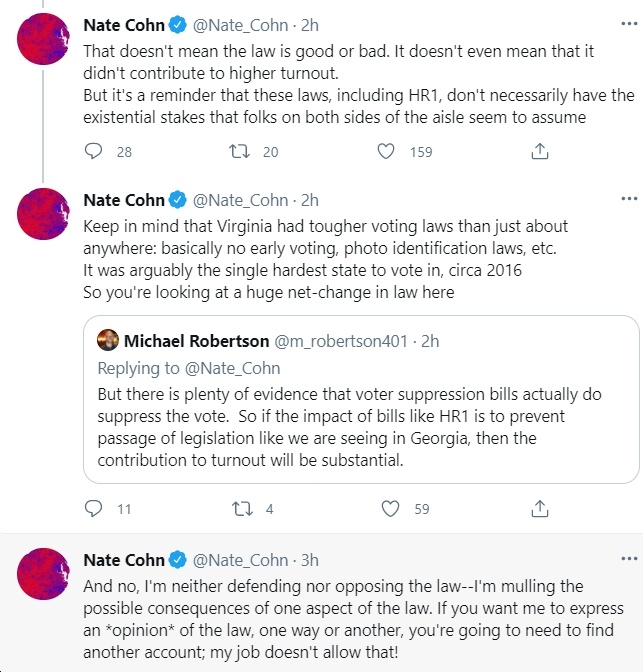 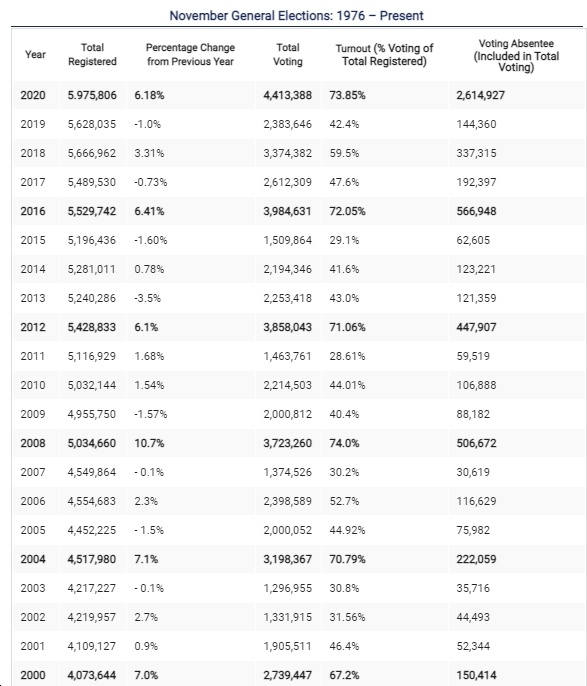