Back in early March, we posted about excellent work by Ohio-based cartographer Ryan Brune, who undertook the challenging job of allocating absentee votes by precinct and calculating a district-by-district breakout for the November 2020 election results in each of the 100 Virginia House of Delegates districts. What Brune found was:

For the methodology that Brune used, click here. In short:

Now, we have another estimate, from a different group of analysts – the Daily Kos Elections team – and it matches up very well with Brune’s analysis. Here are a few highlights from the Daily Kos calculations:

By the way, I strongly agree with the Daily Kos folks that we shouldn’t look at these numbers and get overconfident in any way/shape/form. Because, for those of us who have been following Virginia politics for a few years, particularly those of us who were around during the “before times” (pre-Trump, that is), historically Virginia Democratic voters tended to not turn out in large numbers in non-presidential/non-federal-election years, which is why Republicans held 66 out of 100 House of Delegates seats prior to the November 2017 elections – even though Virginia had gone for Democrats Mark Warner in 2001, Tim Kaine in 2005, Jim Webb in 2006, Barack Obama in 2008 and 2012, Tim Kaine in 2012, Terry McAuliffe/Ralph Northam/Mark Herring in 2013, Mark Warner in 2014 (albeit barely), Hillary Clinton in 2016, etc. That’s also why localities like Prince William  County and Loudoun County could go “blue” during presidential and federal elections, but then elect heavily Republican Boards of Supervisors, as well as heavily Republican General Assembly delegations, in odd-year elections. All of that’s why, as the Daily Kos folks explain:

“However, it’s Republicans who are on offense this year. After two straight cycles of gains, Democrats simply have more districts to defend, particularly because off-year turnout is likely to revert to form. During the Trump era, energized progressives found new reasons to donate, volunteer, and vote, but maintaining that enthusiasm now that Democrats enjoy majorities both in D.C. and Richmond will almost certainly be harder.

Those off-year electorates had often been unkind to Team Blue downballot in the Old Dominion, which is why Biden’s performance shouldn’t be taken as a definitive benchmark.”

So yeah, the big question post-Trump is whether or not Democrats stay active and engaged. The threats to our democracy have certainly not disappeared; if anything, they’ve gotten even worse, as the Republican Party continues to radicalize against democracy and to purge its few remaining pro-democracy members, like Rep. Liz Cheney. And Republicans will certainly be energized with Joe Biden in the White House, and with their delusional/”big lie” beliefs about the election supposedly being “stolen,” about Democrats supposedly moving the country towards “socialism,” blah blah blah. As for Democrats, right now I’m not feeling the same energy/enthusiasm I felt during 2017 at this time, or 2019 at this time for that matter. Is that because of COVID-19 and the relative lack of in-person events for Democrats (note: Republicans don’t give a crap about COVID, and have been campaigning for a while now in person, without masks or social distancing, because that’s how they roll)? Or is it because of post-Trump “exhaustion” (and/or complacency) by Democratic voters?

The bottom line, for the reasons noted above, is that we have to *assume* that Republicans will turn out in large numbers this November, and make sure we respond accordingly. If not, then the fact that Joe Biden won 60 or 61 House of Delegates seats in November 2020 will be completely irrelevant, as will the fact that Republicans haven’t won a statewide race in Virginia since 2009. Because, in the end, if Democrats show up to vote (and volunteer), we’ll stand an excellent chance of winning this November, but if Democrats do NOT show up, then it’s not beyond the realm of possibility that Republicans could win back the House of Delegates and possibly even statewide offices. Let’s all make damn sure that doesn’t happen!

P.S. See below for the results, sorted from highest to lowest Biden %, for all 100 Virginia House of Delegates districts. So which districts do we need to be most concerned about? Based on this analysis: Del. Chris Hurst (D-HD12), Del. Martha Mugler (D-HD91), Del. Roz Tyler (D-HD75), Del. Joshua Cole (D-HD28), Del. Alex Askew (D-HD85), Del. Lashrecse Aird (D-HD63), and possibly several more. 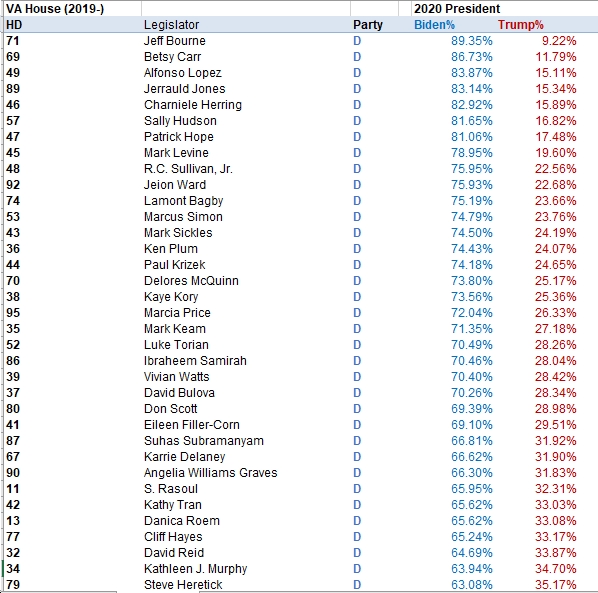 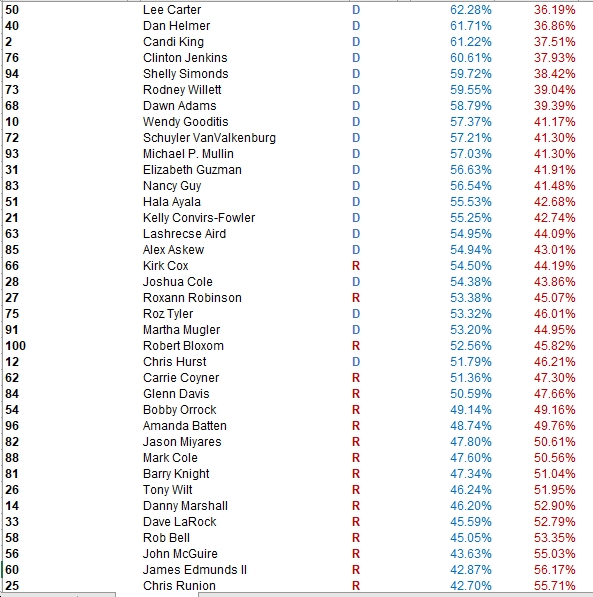 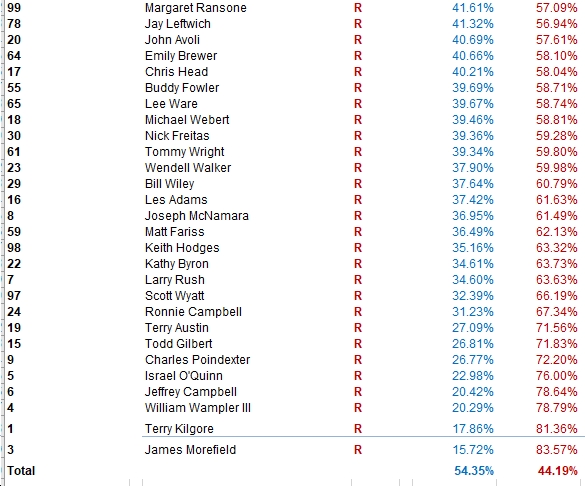