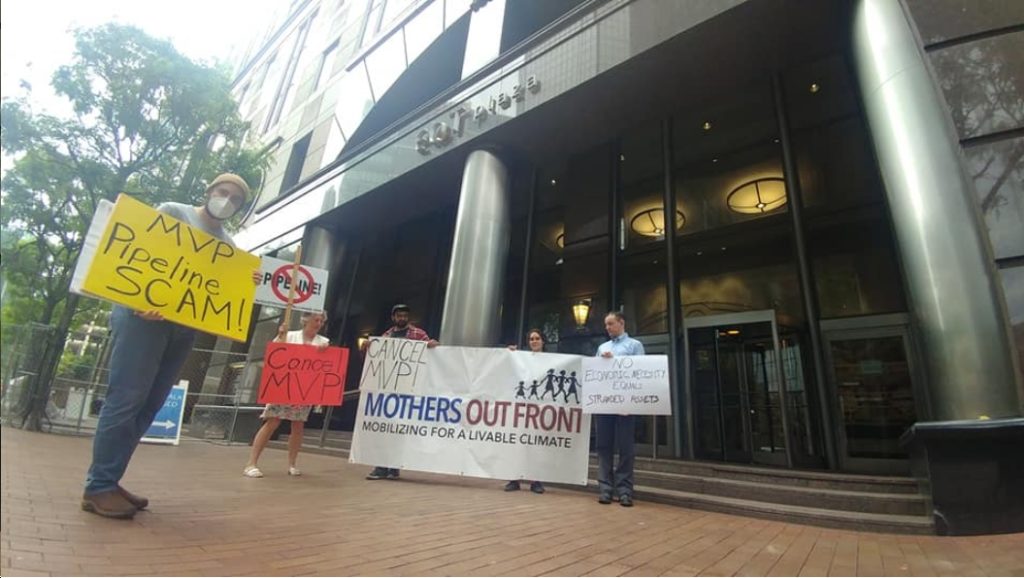 By Freeda Cathcart, an energy investor and Coordinator for Mothers Out Front – Roanoke Team

Based on recent economic forecasts, the bell is tolling Mountain Valley Pipeline (MVP)’s death knell. Lacking essential permits and facing multiple lawsuits, MVP continues to blast and trench its way through the steep mountains of karst terrain in SWVA.

The movement to Cancel MVP continues to grow. Recently, letters to the partners behind MVP were sent to the boards and officers of Equitrans Midstream, EQT, NextEra Energy, Consolidated Edison, Alta Gas and RGC Resources. The letters were signed by 48 organizations representing over one million six hundred ninety thousand members!

Last week there was a Cancel MVP press conference in Pittsburgh on the same day as EQT’s annual shareholder meeting. During the press conference Kyle Gracely, research analyst with Oil Change International, said:

“If it wasn’t clear in 2017 that there wasn’t an economic necessity for the Mountain Valley Pipeline, it’s clear now in 2021 that there’s no market for MVP’s expensive fracked gas.”

Boondoggles like the Mountain Valley Pipeline hurt investors by reducing shareholder values. Often these shareholders are retirees who rely on dividends to survive. It’s not fair for EQT to risk investors’ hard earned money on an expensive contract for MVP’s gas capacity when endline users can get less expensive gas from existing pipelines.

Don’t let the companies behind the MVP hide in the shadows!

Learn their names and shine the light on their part in the boondoggle that’s destroying pension plans, hard working people’s portfolios and most importantly the environment in SWVA.

Who’s behind the MVP?

In this June 7, 2021 op-ed, Fossil fuels are definitively the new tobacco, the CEO of MVP’s partner NextEra Energy admits that the fossil fuel industry is a bust:

“According to NextEra Energy CEO, Jim Robo, “there is not a regulated coal plant in the country that is economic today, full period and stop.” And Bloomberg reports that natural gas is falling out of favor with investors and utilities faster than coal, with its looming risk of $100 billion in stranded assets, due to its inability to compete with declining clean energy costs. Keep in mind, solar energy is now the cheapest electricity in history and it’s only getting cheaper.”

Economists can’t figure out why MVP hasn’t been canceled. There’s no market for the gas. Plus it doesn’t make business sense for MVP to continue construction when they don’t have all the necessary permits. Then there’s the matter of the pending lawsuits that could bring an abrupt end to the MVP.

MVP admitted in court that it’s costing them $20 million a month to maintain its erosion and sediment controls. MVP recently announced further delays have resulted in the project not being able to be finished until summer 2022 and the cost of the project has risen to $6.2 billion (original cost was supposed to be $3 billion). How much is it going to cost to maintain all the new erosion and sediment controls along with the old ones? Without the permits to cross the hundreds of waterways and the pending lawsuits it’s irresponsible to blast and trench through dangerous terrain between the waterways.

Directors and officers of companies are required to fulfill their fiduciary responsibility. As defined by Pepper Law PLC:

“By virtue of being an officer or director of a corporation, you have fiduciary duties irrespective of the fact that you may never have expressly agreed to assume the duties, responsibilities and potential liabilities of a fiduciary. Because officers and directors of corporations have such a strong influence over the conduct of the affairs of the corporation, the law has deemed it necessary and just to impose fiduciary duties upon them…. A phrase used by the courts very frequently to describe the fiduciary duty of a corporate officer or director is “utmost good faith.” Corporate officers and directors, as fiduciaries, have an obligation to refrain from acting in their own best interests, with respect to decisions made in their fiduciary capacity, where doing so would conflict with the interests of the corporation or its shareholders”

In order for the officers and boards of the companies behind the MVP to fulfill their fiduciary responsibility, they must stop work on the pipeline immediately, at the very least until they have all the permits and the lawsuits have been decided. Since it’s becoming obvious that there’s no market for the gas that would flow through the MVP, it would be better to cancel the project regardless if MVP gets the permits or wins in the courts.

Until the companies behind MVP (Equitrans Midstream, EQT, NextEra Energy, Consolidated Edison, Alta Gas and RGC Resources) cancel the project, the movement to cancel it will continue to grow. If the project isn’t canceled before July, then the next Cancel MVP press conference will be in New York City.

A future article will discuss Dominion’s foolhardy involvement in the MVP boondoggle. You can get a preview by checking out this webpage Shippers on the MVP.