Until very recently, you almost certainly had never heard of the phrase “Critical Race Theory” – “an academic concept that is more than 40 years old,” the “core idea [being] that racism is a social construct, and that it is not merely the product of individual bias or prejudice, but also something embedded in legal systems and policies.”

“There’s a debate raging over the history and legacy of American racism and how to teach it in schools. The current iteration of this debate (and there have been many) stretches back to 2019, when the New York Times published the 1619 Project, but it evolved into a kind of moral panic in the post-Trump universe, in part because it’s great fodder for right-wing media.

The hysteria over critical race theory, or CRT, has now spilled beyond the confines of Twitter and Fox News. As I explored back in March, conservative state legislatures across the country are seeking to ban CRT from being taught in public schools.

There are lots of angles into this story, and frankly, much of the discourse around it is counterproductive. The main issue is that it’s not clear what these concepts mean, as tends to happen when ideas (à la postmodernism) escape the confines of academia and enter the political and cultural discourse.

Conservatives have appropriated critical race theory as a convenient catchall to describe basically any serious attempt to teach the history of race and racism. It’s now a prop in the never-ending culture war, where caricature and bad faith can muddy the waters…”

When Vox refers to a “convenient catchall,” they aren’t kidding. Check this out, from a recent article in Education Week:

“One conservative organization, the Heritage Foundation, recently attributed a whole host of issues to CRT, including the 2020 Black Lives Matter protests, LGBTQ clubs in schools, diversity training in federal agencies and organizations, California’s recent ethnic studies model curriculum, the free-speech debate on college campuses, and alternatives to exclusionary discipline—such as the Promise program in Broward County, Fla., that some parents blame for the Parkland school shootings.”

Also from that Education Week article:

“The charge that schools are indoctrinating students in a harmful theory or political mindset is a longstanding one, historians note. CRT appears to be the latest salvo in this ongoing debate.

In the early and mid-20th century, the concern was about socialism or Marxism. The conservative American Legion, beginning in the 1930s, sought to rid schools of progressive-minded textbooks that encouraged students to consider economic inequality; two decades later the John Birch Society raised similar criticisms about school materials. As with CRT criticisms, the fear was that students would be somehow harmed by exposure to these ideas.“

So that’s basically what Critical Race Theory (CRT) is – and isn’t – and why right wingers have seized on it.  For instance, see below, with Glenn Youngkin claiming CRT “has no place in our schools” and is “a political ideology.” WTF? Or how about 2021 VA GOP  Lt. Governor nominee Winsome Sears, who (falsely) claims CRT is “nonsense” and “detrimental to our schools.” Or 2021 VA GOP Attorney General nominee Jason Miyares, who really ratchets up the shrillness and hyperbole, arguing (falsely/absurdly) that “we can’t survive as a nation if we are raising an entire generation of children to learn to hate their country.” Hahaha, that’s right; according to Jason Miyares, if children are taught about the history of race and racial discrimination in America, including how it was embedded in laws and policies, then…”we can’t survive as a nation.” Totally bizarre and truly disoriented/disordered thinking. Let’s just make damn sure someone who thinks that way, such as Glenn Youngkin, Winsome Sears or Jason Miyares, is never elected to high office here in Virginia…

Finally, see below for some tweets about the right-wing hysteria over CRT:

So yeah, the next time you hear Glenn Youngkin, Winsome Sears, Jason Miyares, or any other right winger out there…see the above thoughts and responses, and proceed accordingly. 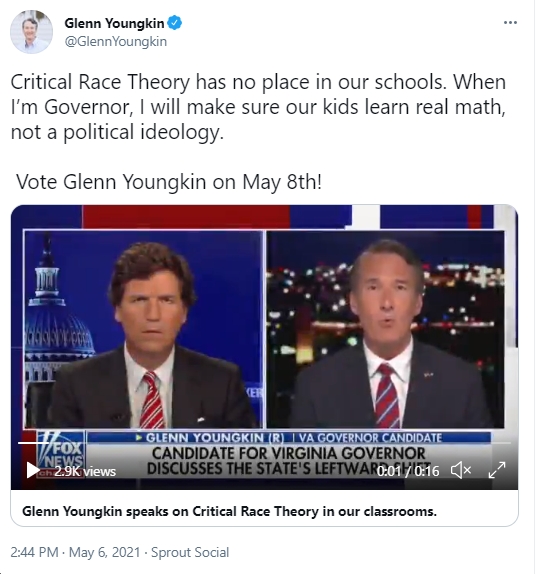 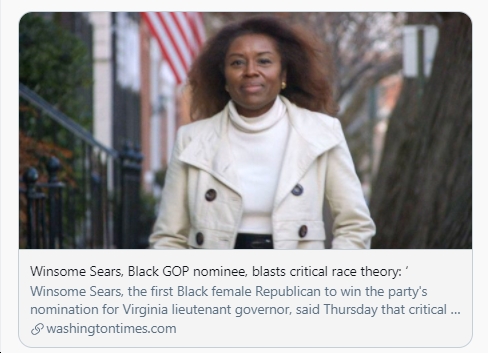 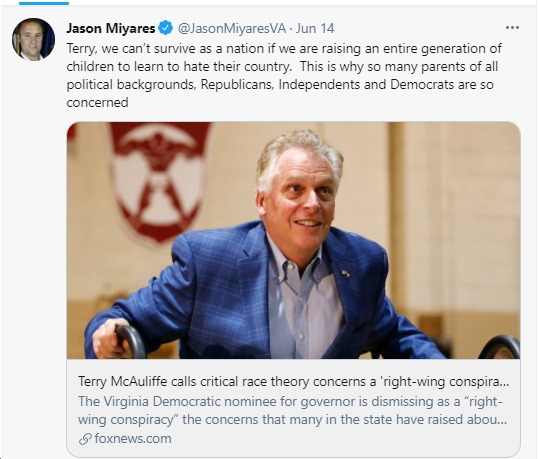 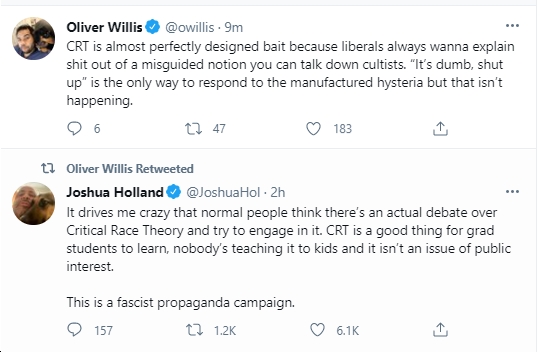 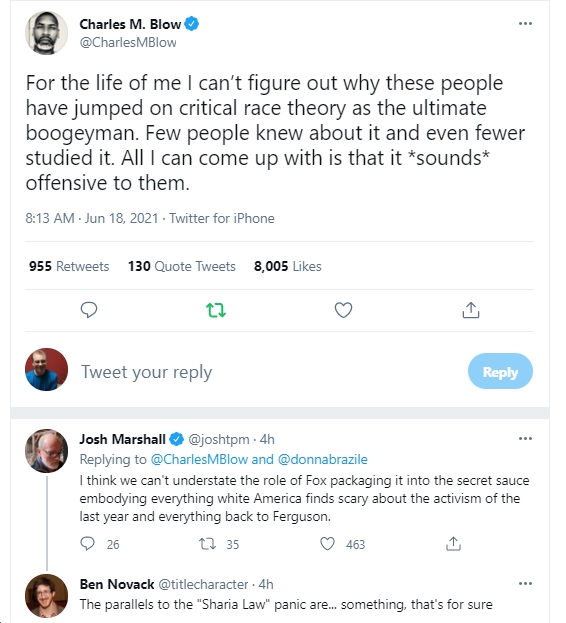 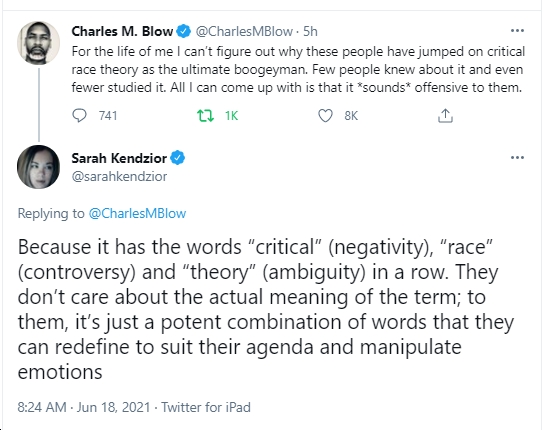 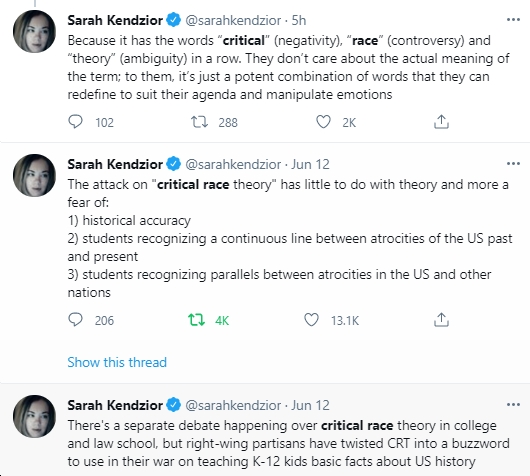 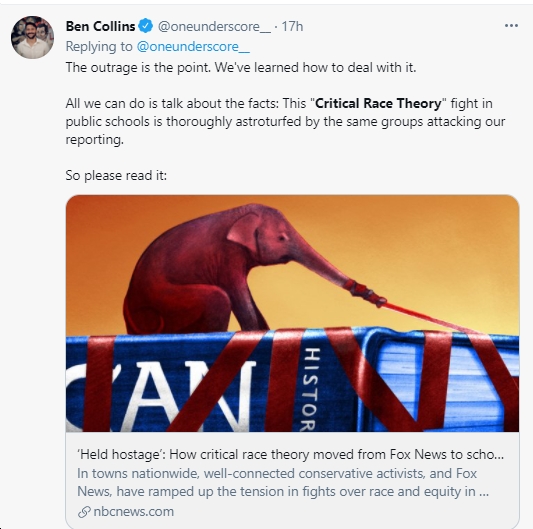 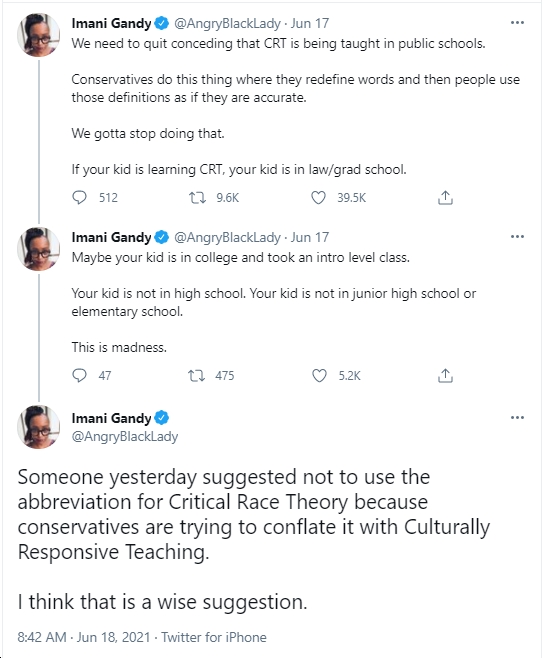 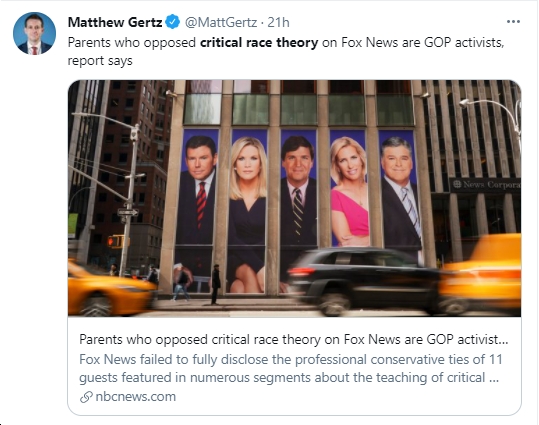 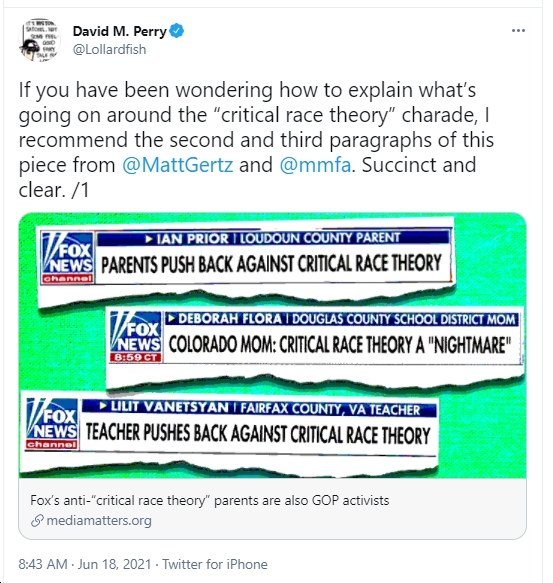 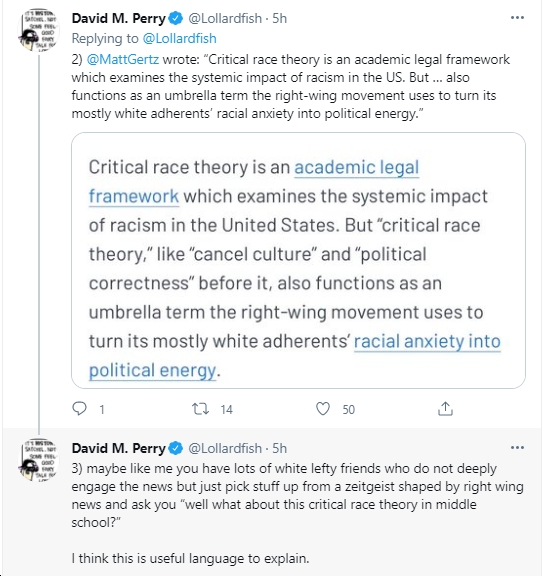 In his NYT interview, Gov. Northam makes these two important points: "Critical race theory is a dog whistle that the Republicans are using to frighten people" and "I think the more we know about our history, the better." https://t.co/v6m8Of8YzQ pic.twitter.com/iqUeniDPjc